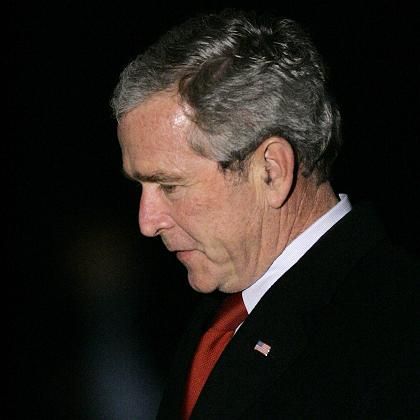 Chuck Hagel, the Republican senator from Nebraska, has ambitions to move into the White House. And since the race for electoral victory in 2008 has already begun, Mr. Hagel has no more time for losers -- even if one of those losers happens to be George W. Bush, his own president.

That became brutally clear on Thursday in the Senate Foreign Affairs Committee, which invited Secretary of State Condoleeza Rice to explain President Bush's newest approach to Iraq. Despite being at pains to perform well, the conscientious emissary didn't get very far -- especially since five designated presidential candidates are sitting on the committee.

Hagel scathingly described the strategy outlined by Bush in his address to the nation, televised on Wednesday, as "the most dangerous foreign policy blunder in this country since Vietnam, if it's carried out." Poor Rice sat wordlessly across from him, her face frozen in a trenchant and grim expression. Scornful applause filled the room -- an unheard of reaction in itself.

Himself a veteran of the US war in Vietnam, Hagel was not alone. It was clear none of the newly confident congressional Democrats would jump onto Bush's proposed Baghdad express, which Senator Joe Biden called a "tragic mistake."

But what about the Republicans? One after another, they severed their allegiance to Bush and slated his plans for Iraq. Rather than sighs of relief, all Bush got after his stated decision to send an additional 21,500 US troops to Iraq were evil tidings. Ronald Reagan's former chief of staff Ken Duberstein characterized Bush's strategy as "exceptionally hard to accomplish."

Taking up the sledgehammer

An additional 21,500 troops? Still more billions of dollars for reconstruction? A fresh diplomatic offensive? "I've gone along with the president on this and I've bought into his dream and at this stage of the game I just don't think it's going to happen," said Republican Senator George Voinovich, sounding bitter and resigned.

Those were sobering words. Sure, Bush knew only too well that his blueprint for saving Iraq and himself -- his last attempt, presumably -- would be exposed to political crossfire. "We understand that people are going to be skeptical," said Whitehouse spokesman Gordon Johndroe on Thursday, adding that he hoped they would "take a look at the details of the president's plan."

That's exactly what people did -- and they rejected the details. They rejected the notion that dispatching additional troops to Iraq would require expanding the US military by 92,000 soldiers in the long term -- a project that would cost about $15 billion a year. They also rejected the proposal of mobilizing the National Guard again, as well as the suggestion that parts of Baghdad need to be hermetically sealed off from the rest of the city -- a tactic that already led to "spectacular failure" in Vietnam, as the Los Angeles Times observed.

And yet the president made an obvious effort to introduce unusually humble phrases into this speech in order to win the audience back over to his side. He used the word "mistake" -- a taboo for him, at least until now. He spoke about "failure." He didn't speak about a possible "victory" any longer, but only about "success." And then, at noon on Thursday, he quickly flew to Fort Benning in Georgia in order to stand cheerfully in front of uniformed soldiers and praise the achievements of the Third Infantry Division "that took up the sledgehammer to help liberate Baghdad" -- a vision of victory that has long since faded.

Door to door on the Capitol

It was no use. The morning papers had already scathingly dissected Bush's ideas about Iraq, such as the one that "most of Iraq's Sunni and Shia want to live together in peace." The New York Times described the war as a "disaster" and the new strategy as Bush's "epic gamble." The Washington Post called the plan "very risky" and predicted that US soldiers "will die in larger numbers than before." USA Today wrote that the chances that the plan would "achieve a stable Iraq" are "a long shot." Even the Wall Street Journal was critical: While it sympathized with Bush in general terms as usual, the paper acknowledged that convincing Americans to support a strategy of brute military force would be a "challenge."

The headlines and commentaries reflected the general mood of the TV audience as well. A lightning poll conducted by ABC News showed that 61 percent of the people polled reject the idea of sending more troops to Iraq. A Gallup poll yielded the same figure; the Associated Press even arrived at a figure of 70 percent. Only the shrinking electoral base of the Republican Party was in favor of intensified military operations in Iraq.

And that despite the fact that before addressing the nation, Bush made an effort to personally win the anchormen of all the evening news channels over to his side. He also sent the top members of his staff from door to door on Capitol Hill. Rice appeared in front of both Foreign Affairs Committees, in the Senate's and in the House of Representatives, while the new Pentagon leader Robert Gates and his general chief of staff, Peter Pace, appeared before the Armed Services Committee. But it was no use.

The politicians remained unimpressed, even the ones in Bush's own party. "Simply not the right approach," was the verdict from Republican Congressman Ric Keller. "We don't want any more American soldiers killed," said Senator George Voinovich. "Why put more Americans on the line now?" his colleague Norm Coleman asked Rice.

Bush is fighting a losing battle. Approving voices were hardly to be heard on Thursday. Bush was praised by New York City's former Mayor Rudy Giuliani, who is looking to improve his profile with an eye to his presidential candidacy. The president also received support from Senator John McCain, who has long been demanding an increase in the number of troops -- so that his support hardly came as a surprise. As for the others, they consistently resisted Bush's proposals.

When Rice, Gates and the others had left Congress, a series of experts painted a somber picture of Iraq's future. Historian Phebe Marr, an Iraq expert formally at the National Defense University, told the Senate "The collapse we are witnessing is likely to get worse before it gets better." Interestingly, the suggestions made by the Iraq Study Group were praised by the all experts -- suggestions that Bush has widely rejected.

What will happen now? Congress, which has been controlled by the Democrats for a week now, will have to work out an official position on Iraq. That's no easy task, given that the Democrats have yet to present a convincing alternative to Bush's proposals, besides withdrawing the US troops in Iraq altogether.

The stage is set for further conflict between the White House and the Capitol. Defense Secretary Gates and his general chief of staff, Peter Pace, will appear before the Senate again on Friday, this time to face the Armed Services Committee. Meanwhile the Democrats are planning to pass a symbolic majority resolution rejecting Bush's Iraq strategy. The aim is to force the Republicans to offer a clear and humiliating assessment of the situation while isolating the president, much as Richard Nixon was isolated during his final days in office. The specter of impeachment was already making the rounds on Thursday.

Other representatives are planning to follow a path that is politically more risky: They want to use their legislative power to cut the military's funds, thereby effectively making the increase in troops impossible. But that approach could cut both ways and make them look as if they were stabbing those soldiers already on the ground in the back.

An exchange between Democratic Senator Barbara Boxer and Condoleeza Rice showed just how bitter the situation has become. Boxer noted Rice has no children to lose overseas. "Who pays the price?" she repeatedly demanded. "You're not going to pay a particular price," she told Rice, because the secretary has no "immediate family" at risk.