If ever there was an investor that was bullish on Russia, then that investor was the Swedish furniture giant Ikea. 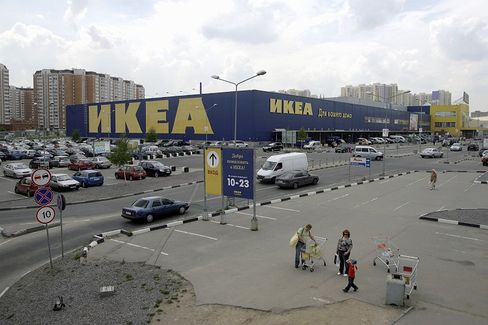 Since 200, Ikea has opened 11 of its huge stores in Russia, including this outpost in northwest Moscow.

Since opening its first store in Russia in 2000, the Swedish retailer has become a potent symbol of Russia's consumer boom. An instant hit with Russian shoppers, Ikea has since plowed billions of dollars into the country, building giant shopping malls in a dozen of Russia's largest cities. Ikea's Russian success seemed like personal vindication for its founder, Ingvar Kamprad. The reclusive 81-year-old billionaire has long harbored an almost obsessive fascination with the country, describing it as "his last big hobby".

So it is more than a little ironic to see what Ikea and Kamprad have been saying about Russia more recently. On 23 June, Ikea announced that it was temporarily suspending all investment in Russia, blaming the halt on "the unpredictable character of administrative procedures in some regions."

That appears to be a polite reference to Russia's rampant corruption, or at least to stifling bureaucratic obstacles whose purpose can only be guessed at. Ikea's announcement comes just a few days after Kamprad, in a rare radio interview, had even harsher words to say about the company's experiences in Russia. Ikea, he fumed, had been "cheated" out of $190 million. Ikea alleges that local suppliers in Russia have failed to provide electricity at agreed prices, forcing the company to build its own generators.

The other thing that seems to have especially exasperated Ikea lately is the fate of a planned new shopping mall in Samara, a large city in the south of Russia. The company had originally planned to open the 130,000 meter complex in November 2007. But a year and a half later, and the store still remains closed.

"Blackmail, Sabotage and Pressure for Bribes"

The store's opening has reportedly been delayed on eight separate occasions, with local officials refusing each time to supply the necessary documents. The latest objection, according to Ikea, is that the store is insufficiently resistant to hurricanes. That's a highly unusual requirement, in a region not previously noted for its high-power winds.

In fact, such perplexing problems have bedeviled Ikea's expansion for years. In the most serious incident, in 2004, the opening ceremony for a new Ikea mall in Moscow had to be called off at the last minute (embarrassingly, the assembled dignitaries included the Swedish and German ambassadors). The local authority refused permission, claiming that the parking lot was too near a gas pipeline. That incident seemed to have been the last straw for Ikea, which publicly raged against "blackmail, sabotage and pressure for bribes" from Russian officials.

That row was eventually patched up, after Ikea appealed directly to President Vladimir Putin, and threatened to pull the plug on future investments. But, alas, any respite from Russia's "unpredictable administrative procedures" seems to have been no more than temporary. It wasn't long before similar delays were impeding Ikea's expansion in other Russian cities.

Hence the sense of deja vu this time. No doubt, like the previous big bust-up in 2004, Ikea's latest threat is also an example of shock tactics, designed to prompt intervention from Russia's senior officials. But can anyone doubt that the underlying problems will remain?

Ikea's complaints of bureaucratic harassment and broken contracts have a wearily familiar ring to them, echoing complaints by other disillusioned investors. When even a previous Russia-enthusiast such as Ikea starts crying foul about its treatment, it's hardly a great advertisement for others to follow in its pioneering footsteps.