If you've got a name like Mehmet or Neylan, you live in Germany and you are applying for a job, there's a good chance your application will be answered with a rejection letter.

Finding gainful employment can be difficult for anyone these days, but a recent study in Germany concluded that candidates with foreign-sounding names, older job seekers or women with small children have a much harder time finding work. And while it may seem anathema in many other Western countries, in Germany it is still standard practice for potential employees to submit a photo and disclose their gender, age, home address, marital status and other sensitive information like nationality on their applications.

In a recently completed report, researchers at the Institute for the Study of Labor (IZA) randomly assigned foreign and German-sounding names to applications for an internship. The candidates all had the same or similar qualifications, but the researchers found that applicants with names that sounded German had a 14 percent greater chance of landing an interview.

It's a disparity that the German government is hoping to address with a new project launched on Tuesday to introduce the concept of anonymous job applications that do not include pictures, names, ages or other information that could lead to discrimination. Five major corporations across the country are participating in the project.

'We Want to Give People a Chance'

"This way, it is just (a person's) qualifications that will matter," said Christine Lüders, the head of the Federal Anti-Discrimination Agency and a member of Chancellor Angela Merkel's conservative Christian Democrats (CDU). "We want to give people a chance who otherwise might never have been invited to a job interview." Lüders' agency was set up in 2006 following the passage of a new German law codifying European Union anti-discrimination regulations that ban discrimination by employers on the basis of race, ethnic origin, gender, disability, age, sexual identity or other factors.

According to Lüders, women often complain that they would have a better chance of landing a job interview if there was no mention of their children in their resume. And older people often say that they are not granted job interviews for positions for which they are highly qualified. She said that one engineer with an Arab last name and two university degrees claimed that some of his applications had been rejected in as fast as two days. When he inquired about the status of the position using a different name, he was told it was open.

The head of research institute IZA, Klaus Zimmermann, said that discrimination on the labor market continues to be a major problem in Germany. "In light of a growing shortage of skilled workers in Germany, we need to better exploit the personnel resources available to us." Anonymized resumes, he argued, "could help to at least reduce discrimination at the first stage of the application process."

A number of top companies in Germany agree. Former German postal monopoly Deutsche Post, telecommunications giant Deutsche Telekom, cosmetics firm L'Oréal, consumer goods multinational Proctor and Gamble, MYDAYS, a company that sells gift certificates for experiences like dining, sports, travel or entertainment, as well as Germany's Family Ministry are taking part in the year-long pilot project, which is set to begin this fall. For Deutsche Telekom, it is the second major diversity initiative announced this year. In March, Telekom CEO René Obermann stated that the company had an official goal of filling 30 percent of its management positions with women by the end of 2015.

'Diversity Is an Absolute Priority for L'Oréal'

French cosmetics giant L'Oréal has employees from 36 countries working in its German division. The company says the creativity spawned by its diverse teams makes it easier for the multinational firm to create global products for customers who vary widely in tastes from country to country. "Diversity is an absolute priority for L'Oréal," said Oliver Sonntag, head of human resources for Europe. "To further promote this diversity, we want our personnel (managers) to avoid making any subconscious decisions during the selection of applicants. Our workers have already been given sensitivity training on the issue, but we still want to develop further in this area, and that's why we are participating in the pilot project."

In the pilot project, sensitive personal information is removed before an application is processed by a personnel department, and decisions on whether to grant a job interview are based exclusively on qualifications -- at least that's the aim. The application is only matched with a name and a face after a decision is made over whether to interview the person or not. Researchers at IZA will monitor the project to determine its effectiveness.

But the business world is split over the potential effectiveness of anonymized applications. Smaller companies say that the process will create additional burdens that they cannot afford.

"Anonymous resumes are not practical in real life," said Kristina Huke, a labor law expert at the Federal Association of German Employers (BDA). After all, some companies deliberately hire people with different social and ethnic backgrounds, genders and age as a part of already existing diversity strategies. With an anonymized application process, they might not continue to deliberately seek female or foreigner employees. BDA says the procedures are difficult to implement and that they increase the level of bureaucracy.

And Verena Werner, spokeswoman for German insurance giant Allianz, which is not participating in the project, says her company relies on internal training to make its employees more sensitive and aware of potential discrimination traps.

Others argue that anonymized resumes will not stop the problem of discrimination, they will merely serve to delay it to the interview stage.

Can One Size Applications Really Fit All?

Concerns about the effectiveness of anonymized applications are also shared by Germany's largest airline, Lufthansa, which together with its subsidiaries flies to 274 cities in 104 countries. In Germany, the company employs people from 130 nations, said company spokesman Patrick Meschenmoser. He said the company highly regards the "individuality" of its employees and fears that could be lost through an anonymized application process.

However, advocates for the new initiative remain undeterred and point to similar trials in Sweden or France, where President Nicolas Sarkozy has promoted an anonymous application program that 50 companies are participating in. "Why shouldn't something that is already common practice in other countries be possible in Germany?" asked the Anti-Discrimination Agency's Lüders. But even she admits that a one-size-fits-all approach can't be applied to all positions and companies. "We cannot do this for all parts of business," she said. "This kind of procedure would not be appropriate for finding the new CEO of a company like Deutsche Bank, for example."

In Berlin, Turkish community organizer Yilmaz is hopeful that it will at least give some prospective workers with immigrant backgrounds a better shot at getting interviews. His group, TGD, has even set up its own website where people of Turkish descent living in Germany can report their job-hunting experiences. He said that thousands have already participated.

"We need to find new ways to fight discrimination," he said. "Only then can we maintain peace in our society." 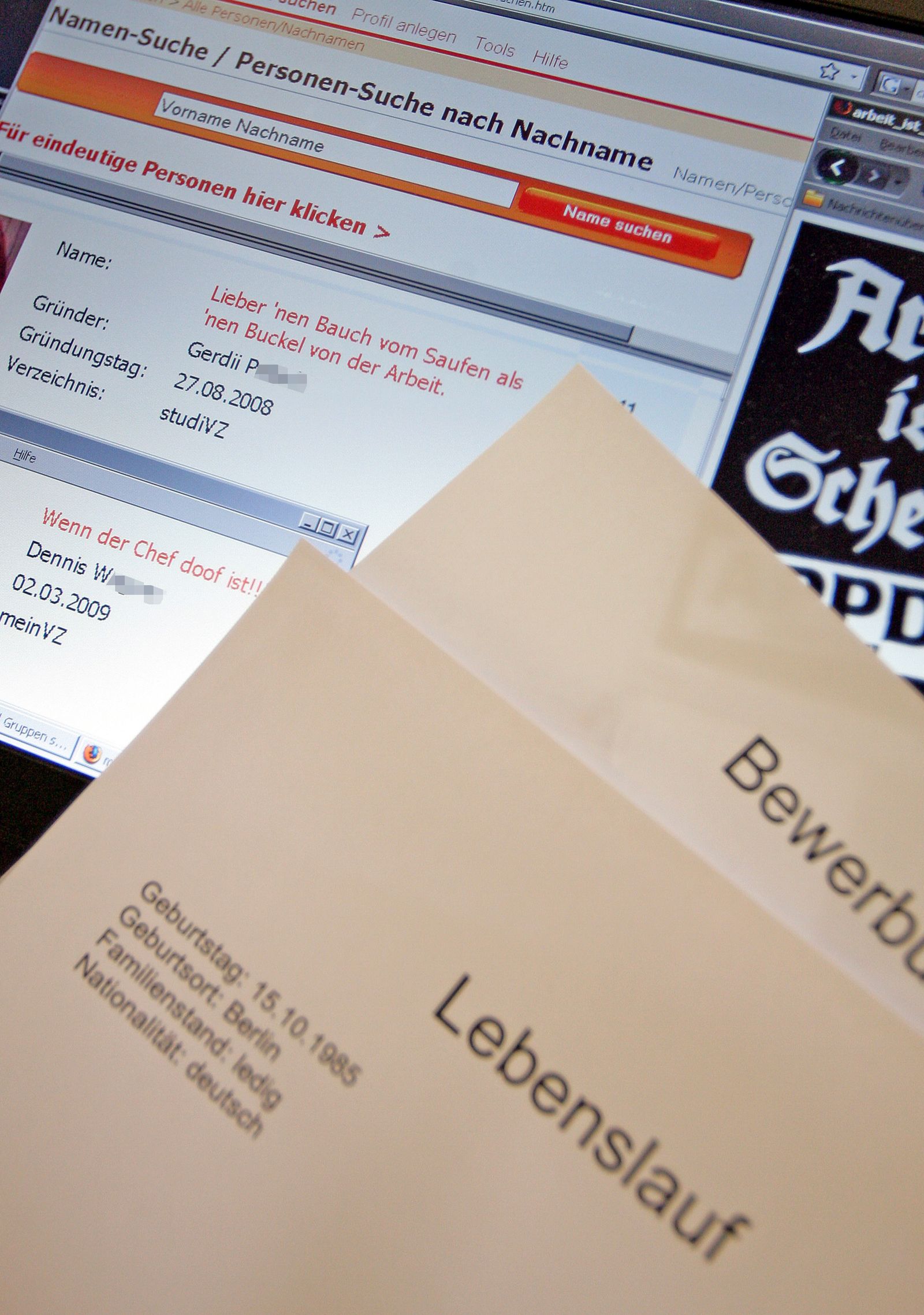 In Germany, it is common for a resume or curriculum vitae to include sensitive personal information, like date of birth, nationality or even marital status. One government agency is hoping to eliminate that practice.