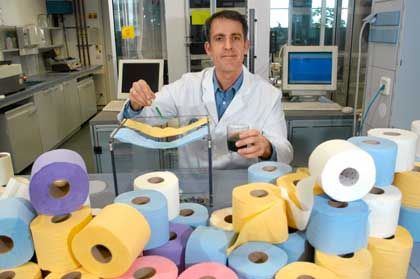 Siedfried Hustedt in the Procter & Gamble laboratory in Schwalbach, Germany

Siegfried Hustedt is often overcome with dread when he is forced to use other people's toilets. The toilet paper he encounters in those bathrooms is almost inevitably colored or white, fluted or spotted. But for all the paper's pleasing appearance, appearance is all it is -- when used, the chintzy material often gets lumpy and decomposes into an unsavory pile of cellulose as "the embossment structure collapses under pressure." Even more dramatic is the excoriated red sore caused by overly rough foliage. Hustedt, 40, can't help but ask himself why so "many people choose to suffer to the last roll."

It would be safe to call Hustedt a toilet paper connoisseur. The experimental physicist works for Procter & Gamble's research center in Schwalbach, Germany, near Frankfurt, where together with his fellow researchers, he is developing the toilet paper of the future. His latest creation is a toilet paper that is soft, removes a good deal and promises sparing use -- factors that have captivated the competition while also satisfying the wishes of consumers.

Here's how the lab's absorbant wonder works: The conventional manufacturing process involves toilet paper rolls being pressed from cellulose pulp. The paper produced is initially smooth; its later surface structure is just the product of subsequent embossing. But Hustedt and his researchers have developed a new method. They spray the wood-based raw material onto a special grid in a graduated manufacturing process that yields a three-dimensional paper structure experts believe can "hold its shape longer under pressure."

In addition, the researchers are using different types of fibers, which guarantee both the softness and the sturdiness of their toilet paper. When Germany's leading consumer advice group, Stiftung Warentest, test drove the toilet paper, which is marketed here under the Charmin brand, last summer, it wrote that it is "one of the best things you can do for yourself and your derrière."

Intoxicated by the positive response, Hustedt now takes pleasure in badmouthing "certain limitations of our competitors." The structure expert mocks competing companies for "just slapping one ply onto another."

Accordingly, Procter & Gamble's main business rival Kimberly-Clark has discovered that "there is much talk of plies on the German market." But paper structure isn't everything -- it's just one aspect "among many" in the creation of a successful toilet paper, a company spokesman says, taking a jab at Procter & Gamble. Kimberly-Clark sassily continues to claim leadership in the premium segment of the toilet paper market, with its Hakle brand of toilet paper and wet toilet wipes.

Under the banner of environmental friendliness and efficiency, Hustedt and his colleagues at Procter & Gamble are currently pursuing an even more revolutionary plan: the complete reduction of their own creation. Instead of rigging up their product with as many as five plies, their air-dried cellulose glop makes do with just two -- "with improved absorbing capacity," the physicist emphasizes.

The man in charge likes to test the absorbency himself from time to time -- by spooning dark green honeydew honey onto the plies. The laboratory team tests the tear strength by weighting down the toilet tissue with glass marbles.

Hustedt is already boldly dreaming of his next great pitch: "Why shouldn't we be able to achieve our current result with just one ply?" He claims that a single ply of the toilet paper he developed is good enough to provide satisfactory cleansing.

Full of relish, the scientist has even begun devoting himself to the wayward idea of making "toilet paper entirely superfluous." The idea isn't altogether absurd: A large part of the world's population has no trouble whatsoever getting by without toilet paper. Indians and Arabs manage with their left hand and a bit of water. Some nomad peoples are reported to clean themselves with sand after following nature's call.

The same cleansing process is performed far more luxuriously by using so-called "washlets." A gentle jet of water from the depths of the toilet bowl caresses the afflicted backside. The Japanese are especially fond of turning to washlets to avoid the bothersome process of scrubbing themselves with raw fibers.

In terms of cultural history, the triumph of the toilet paper roll was never a given. The Americans saw no use whatsoever for the expensive product at first -- and for a long time they preferred wiping their behinds with paper torn out of free catalogs. And in 1950s Germany, purchasing toilet paper -- a commodity that has long since become a necessity of life -- was an extremely embarrassing activity.

Such inhibitions still seem to have an effect today. Even an enlightened scientist like Hustedt admits: "Going to the bathroom isn't exactly something that people look forward to."