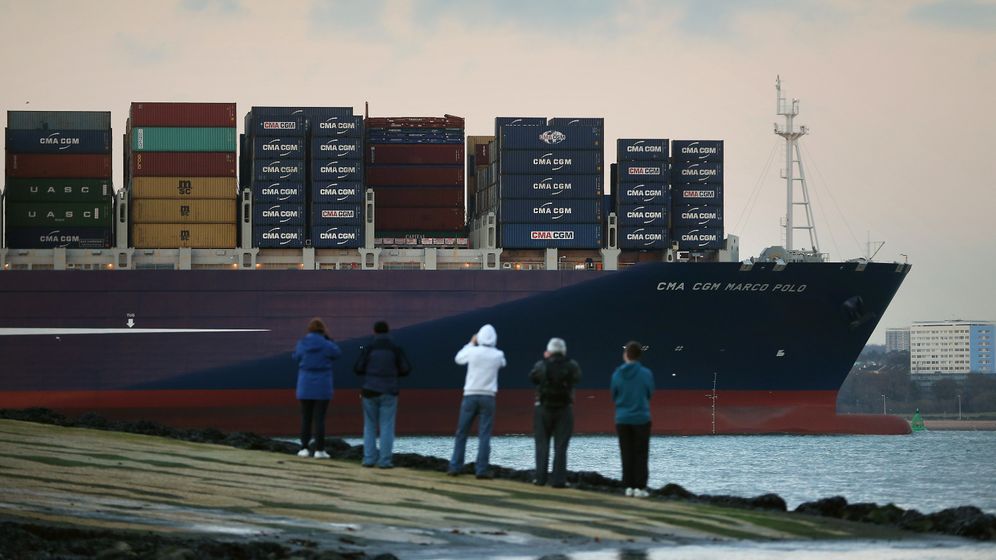 The 115-kilometer (71-mile) stretch of the Elbe River between the North Sea and Europe's second largest port in Hamburg is one of the most important waterways in Germany. It has ensured the prosperity of the Hanseatic trading city for hundreds of years and secured an important role for Hamburg in a globalized world.

Few images could illustrate that position along with the challenges it presents as well as the arrival early Wednesday morning of the world's largest container ship, the CMA CGM Marco Polo. Numerous spectators lined the shores to get a glimpse of the mighty ship.

At 396 meters (1,300 feet) long and 54 meters wide, the Marco Polo is larger than a US Navy aircraft carrier and is capable of carrying 16,000 standard container units, or TEUs. During this trip, however, the ship only planned to carry 4,000 containers -- otherwise the Marco Polo would have been unable to navigate the waters of the Elbe, which are too shallow for the latest generation of super container ships.

Officials at the port took advantage of the ship's arrival to do a bit of PR on behalf of controversial plans to dredge and deepen the Elbe River to make it navigable for future mega container ships. Before the ship arrived, a spokeswoman for Hafen Hamburg Marketing, an agency affiliated with the port, noted that a ship of this size could only enter the port of Hamburg at full capacity if the river were dredged. Even today, a good number of the larger ships that make their way to Hamburg can only navigate the Elbe River during high tide. Without tidal assistance, ships with a maximum draught of 12.8 meters can enter the port, but today's largest ships now have a maximum depth of 15.5 meters. Once dredging is complete, the port would like to enable ships with a depth of up to 13.5 meters to be able to enter, regardless of tides.

The port is not alone in its complaint about the depth and girth of the Elbe, which hasn't been dredged since 1999. Logistics giant China Shipping recently warned that Hamburg could lose its competitiveness as a port if the city doesn't move ahead with plans to dredge the river. Already, the company warned, shipping firms with larger vessels were instead choosing to dock in other European ports, like Rotterdam in the neighboring Netherlands, which is capable of accommodating the new generation of massive vessels.

In October, the German Federal Administrative Court in Leipzig upheld an emergency petition and halted the €400 million ($520 million) project to deepen the Elbe River by up to 2.4 meters until it could consider environmentalists' complaints against the plan. Topping those concerns are worries that dredging could exacerbate the threat of flood surges on the river. But the port and shipping companies fear the decision, if allowed to stand, could kill Hamburg's long-term competitiveness as a major European port.

For the time being, the Marco Polo, which is operated by the French shipping firm CMA CGM, will continue to dock in Hamburg on a regular basis during trips between Europe and Asia. One thing is certain though: It won't carry the title of world's largest container ship for too much longer. A South Korean dock is currently building the first ship with a capacity of 18,000 standard containers for Danish shipping giant Maersk, which is expected to go into service next year. Shipping companies are already envisioning even larger container ships, with capacity for 20,000 or more TEUs.

Nor is it likely that the debate over dredging the Elbe River will let up anytime soon. A court decision on the case isn't expected before 2013.