Amsterdam's Schiphol Group and France's Aeroports de Paris (AdP) have agreed to a cross shareholding of 8 percent. A French listed company is getting a small stake in Dutch state-owned firm that manages one of Europe's largest airports.

The partnership agreement is the fulfilment of a dream by Schiphol's outgoing CEO Gerlach Cerfontaine -- or, in any event, a partial fulfilment. Cerfontaine, who retires on January 1, has been fighting for the privatization of Schiphol for years. He believes that will help the group's international expansion plans by giving it access to private capital. But in October 2007 -- long before the credit crisis -- Dutch Finance Minister Wouter Bos vetoed the latest attempt to privatize the airport. Schiphol must stay in state hands, he said.

The announcement of the "industrial partnership" between Schiphol and AdP -- which owns the three Paris airports Charles de Gaulle, Orly and Le Bourget -- places a little bit of the Dutch airport group in private hands for the first time. AdP is listed on the stock exchange, even though the French government is its main shareholder.

AdP and Schiphol have agreed to take stakes of eight percent each in the other's company. All of the AdP shares purchased by Schiphol are owned by the French government, which emphasized Tuesday that it has no intention of ceding its majority interest in the airports. 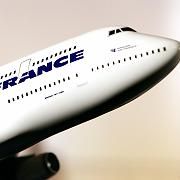 Airports in France and the Netherlands have benefitted from the 2004 merger of Air France and KLM.

The shares purchased by AdP are from both the Dutch government and the city of Amsterdam. Schiphol is paying €530 million for its interest in AdP, which comes to about €67 per share. This is well above current share price, which rose to €49.37 in trading on Tuesday morning. AdP is paying €370 millon euros for its eight percent stake in the Schiphol Group.

The two companies will also exchange board members. Cerfontaine and financial director Pieter Verboom will each receive a seat on the French board. And AdP chairman Pierre Graf will become a member of Schiphol's supervisory board.

The two airports say the increased cooperation will lead to greater efficiency. Their combined turnover and passenger numbers make them the world's largest airport group. The synergy between the two groups is to come from the exchange of knowledge and technology and mutual investments in third companies. The management of the two firms expects the partnership will lead to €71 million in savings by 2013 and €18 million in savings a year thereafter.

Schiphol and Charles de Gaulle airports had already been cooperating more closely following the merger of KLM and Air France in 2004. The two have, for instance, been using each other's hubs to facilitate traffic between the two countries. The partnership between AdP and Schiphol is less far-reaching than the complete merger between the two carriers but basically follows the same lines.

Many in the airline industry were skeptical about the merger, which has been a major success. Air France-KLM is now the largest airline in the world and one of the most profitable, while the rest of the sector is struggling.