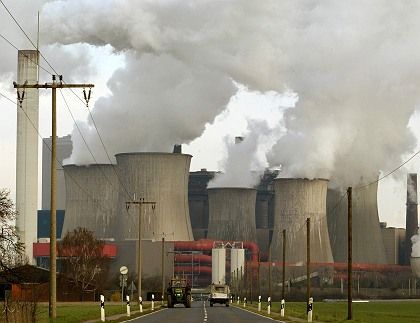 Armani-clad investment bankers usually don't get much credit for saving the world. But the success of Europe's thriving market in trading carbon emission credits highlights a major area of innovation there -- and a rare instance where making money and helping the planet go hand in hand.

This is no feel-good charity scheme. Enticed by the possibility of high returns from the European Union's Emission Trading Scheme, financial institutions, including Barclays and Morgan Stanley, have flooded into the Continent's cap-and-trade carbon dioxide market since its creation in 2005. Now, an estimated $78.6 billion in carbon credits -- the right to emit a specific amount of carbon dioxide -- are traded annually on the EU ETS. And trades in other carbon-related financial products, such as derivatives and futures, are posting double-digit gains each year.

Helping to fuel the market's rapid expansion are a host of new products and services revolving around carbon trading. Perhaps no company has jumped on the opportunity more than Dutch startup European Climate Exchange, whose platform handles 85 percent of the 1.2 billion carbon emission trades made annually in Europe via exchanges. (An additional 800,000 or so carbon credits are traded bilaterally between companies, not via exchanges.) Now ECX is looking to expand into the fast-growing futures market.

"The EU ETS is an emerging market, so there's high risk and high returns," says Sara Stahl, ECX's business development manager. "There's a lot of liquidity in the market as financial players have entered either as brokers or have looked to trade [for themselves.]"

One key to ECX's success was how fast it was able to get to market. To accelerate its product launch in 2005, the company banished not-invented-here syndrome and joined with Atlanta-based Intercontinental Exchange, a maker of electronic trading systems widely used for futures, derivatives, and commodities. That gave ECX the necessary infrastructure, such as trading software, as well as entrée to ICE's base of more than 9,000 clients.

"A lot of these players were already trading energy-related contracts, so our carbon product was a logical fit," says ECX's Stahl. "If you're trading oil, for example, looking at the carbon contracts just makes sense."

The Incumbent in a Mature Market

This ready-made approach has given ECX an early advantage over rivals such as NYSE Euronext. In partnership with French bank Caisse des Dépôts, the transatlantic stock exchange launched spot emissions trading on its Bluenext platform on Jan. 22, 2008, and futures contracts on Apr. 21, 2008.

According to analysts, about three-fifths of EU ETS trading occurs on exchanges such as ECX and Bluenext, while 40 percent is brokered directly between buyers and sellers of carbon credits. By launching its exchange first, ECX is now the incumbent in a market that has expanded sevenfold to 2 billion emissions credits over the last three years. "Emissions trading has grown up very fast and is now well established," says ECX's Stahl.

On Mar. 14, the company launched a new financial product tied to carbon emission reduction credits, a U.N.-approved program that allows companies to generate carbon credits through CO2 reductions in the developing world, which can be sold on the EU ETS. While only 135 million CERs have been traded so far, analysts reckon there's significant growth potential: Between 2 billion and 3 billion such credits are expected to reach the market by 2012.

The expansion of carbon contracts also has created a demand for financial intermediaries to help European companies navigate the emissions trading scene. Heavily polluting industries, such as energy, cement, and metals production, must buy and sell credits under the EU ETS, but smaller companies often lack the resources to trade CO2 on their own. Where oil producers such as BP or utilities such as France's EDF already have deep experience with trading, a small-scale glass manufacturer in Spain could be caught out by the complex carbon markets.

In response, outfits like Britain's Carbon Capital Markets (CCM)have stepped into the void. Offering to shoulder companies' commitments under the EU ETS, CCM trades emissions credits on behalf of small industrial clients and simultaneously finances carbon projects in the developing world to create CER credits. Since opening its doors in 2005, the company now has more than 350 clients across Europe and trades up to 50 million emissions credits each day.

"We act as a sort of stockbroker for players in the emissions trading market," says CCM Chief Executive Officer Lionel Fretz. "The market is here to stay -- the EU really stepped out on its own by creating this market-based mechanism."

To be sure, not everything has gone smoothly for Europe's attempts to reduce CO2 emissions. An overallocation of carbon credits caused prices to drop almost to nothing in the first phase of the EU ETS, which ended in 2007. At the same time, consultancy Point Carbon estimates the Continent's emissions actually rose by 1.1 percent last year.

Polluting industries also say the extra costs associated with carbon have given a competitive advantage to rivals located in emerging countries that don't have to offset their CO2 footprint. "At today's prices, buying carbon adds 10 percent on to industry production costs," says Ian Rogers, director of UK Steel, an industry body.

Market watchers expect these problems to iron themselves out as Europe's carbon markets mature -- especially after 2011, when the aviation sector joins the EU ETS. Other parts of the world also are taking a page out of the European playbook: Australia will launch its own cap-and-trade scheme in 2010, and analysts reckon a federally regulated market in the US could get approval soon after the November elections.

Despite a few early teething problems, Europe's solution to climate change stands as a global model of applying market-based innovation to a tough social and environmental problem. And nimble companies like ECX and CCM have led the way.