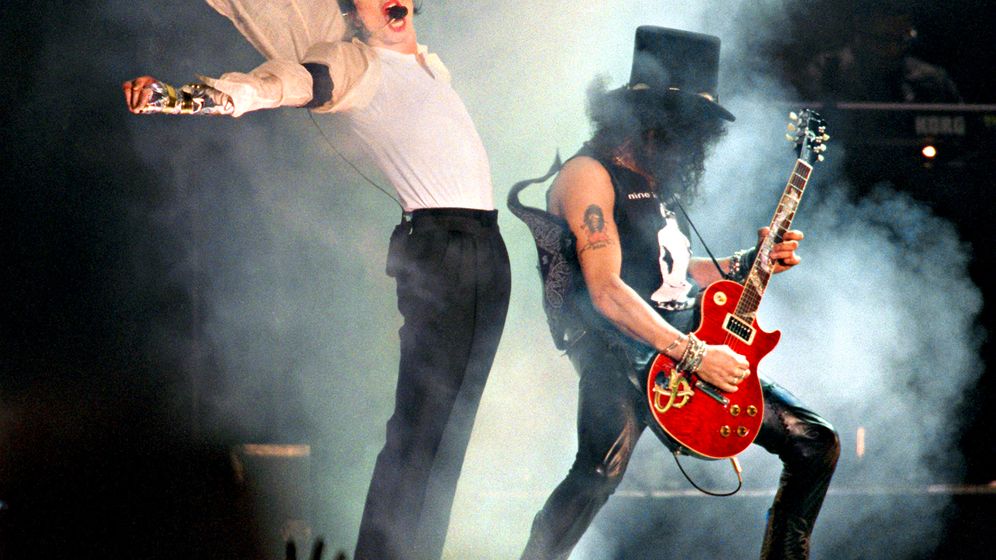 On the website of music manager Dieter Wiesner, Michael Jackson seems as full of life as ever. A multitude of colorful pictures show the singer alongside a tall, slightly heavily built German man from Rodgau near Frankfurt. "Wiesner worked with Jackson on the majority of all his concerts and in 2002 ... became Michael Jackson's personal manager," it says online.

At that point, Michael Jackson's best years were well behind him. "I took care of everything for Michael," Wiesner says today. "We weren't just business partners; we were also very, very good friends." The music manager says he even lived in his own guesthouse on Jackson's Neverland Ranch, near the children's train.

Michael Jackson died on June 25, 2009, leaving the justice system to deal with the pop star's glitzy world -- as well as a world of shadows in Rodgau.

Conrad Murray, Jackson's personal doctor, is facing trial in Los Angeles. The district attorney's office accused the doctor last May, in front of TV cameras, of having negligently caused the singer's death by prescribing Propofol and a cocktail of other sedatives.

Public prosecutors in Frankfurt, meanwhile, are investigating Wiesner. A former German business partner claims Wiesner cheated his celebrity friend, and above all the business partner himself. He alleges that Wiesner illegally acquired rights to Michael Jackson's global brand name, purchased a decade ago by the German company MJ Net AG.

Wiesner met Jackson in 1994, when he got the singer interested in a peach-flavored energy drink called "MJ Mystery Drink." The music manager repeatedly managed to gain close access to the singer, who was increasingly known to be suffering from illness and prescription drug abuse. Wiesner eventually became Jackson's manager.

On Sept. 30, 2000, the Frankfurt-based company MJ Net Entertainment managed to obtain a licensing agreement with Jackson and his company Triumph International, possibly through Wiesner's intercession. The artist, a famous individual in the entertainment industry, wishes to produce and merchandise certain products which bear his name, his symbols, logos, brands, designs and images or photographs of him, the introduction to the contract states. MJ Net, as the license holder, the contract continues, retained the sole and unconditional right to enter into third-party contracts concerning production or matters relating to licensed products. Any T-shirts or other items bearing the artist's image would garner royalties for MJ Net and Jackson himself, according to the company's business plan, was to have a stake in the company.

The licensing agreement also drew interest in MJ Net from German Internet entrepreneur Klaus Landefeld, 42, who quickly discovered that contact with Jackson's company went through Wiesner. Landefeld couldn't believe his luck when Wiesner quickly obtained approval from Jackson's company that additionally allowed MJ Net the global online use of Jackson's name. Landefeld gave the company a loan and purchased a block of the company's shares from Jürgen Bachus, chairman of the board at MJ Net.

Several other private individuals in Germany invested as well, and Jackson's company, Triumph, reportedly received millions of dollars through the licensing agreement. The star was deeply in debt and could certainly have used the money at the time. It appears, though, that the whole business of royalties was never carried out entirely correctly. Signature Network, an American company, claimed similar rights -- apparently Jackson had sold off his rights at least twice.

"Bachus and Wiesner kept the difficulties with the licensing agreement from us for a long time," Landefeld says. Instead of informing Landefeld of the problems, Wiesner, now a board member at MJ Net, arranged a meeting between him and Jackson at the latter's hotel suite in the Waldorf Astoria in London in spring 2002. "The pop star came in without makeup, in his bathrobe," Landefeld remembers. "He ate a croissant and hugged Wiesner like an old friend." The entrepreneur, whose specialty is computer security, not show business, was relieved, imagining this meant his money was secure and Wiesner indeed had the star's trust.

That euphoria was short-lived. MJ Net had to be dissolved in 2004 and the district court in Frankfurt declined to open insolvency proceedings against the company due to a lack of sufficient assets. The company had made just €871 ($1,270) in revenue in 2002, according to an expert insolvency review.

The injured parties in Germany weren't willing to leave it at that, however. One of them pressed charges against Wiesner and his colleagues in 2005, for fraud and delaying insolvency proceedings. The courts were unable to ascertain whether fraud had occurred, but in January 2007, Wiesner was sentenced to a fine of €25 per day for 90 days, for delaying insolvency proceedings.

It's unlikely the fine caused Wiesner many sleepless nights. After Jackson fired him as an advisor, Wiesner sued the musician and his company Triumph in a Los Angeles court, asserting his right to compensation for unpaid work performed in his role as manager and calculated that the pop star had received a total of $9 million from MJ Net under false pretenses. In the statement of his claim, Wiesner asserted that MJ Net had sold all rights, titles and shares of the agreement with Jackson to him before the suit was filed.

To settle the disagreement, both parties signed a confidential settlement agreement and mutual statement, not previously revealed to the public, on Sept. 14, 2007. With his large, looping signature, Jackson agreed to pay Wiesner a total of $3.48 million.

But the squabbling over the pop star's money first began in earnest after the singer's death -- Michael Jackson is one of the most lucrative deceased performers in the history of pop music, trailing only Elvis Presley and perhaps John Lennon. The two executors of his estate had officially earned $310 million by the end of 2010 and Sony alone paid $250 million for the right to release multiple new albums by the King of Pop in the coming years. More than 31 million records of the musician's music were sold in the 12 months following his death.

The matter of Michael Jackson's debts, amounting to over $400 million, hasn't been entirely resolved. The unwell artist had lost track of the situation by the end of his life. By late 2010, a total of $159 million had gone toward settling some of his debts and to an inheritance for Jackson's three children and his mother Katherine, who is now raising them.

The German investors didn't become aware of Wiesner's confidential deal until after the singer's death. "As a major shareholder of MJ Net AG, I never heard about or authorized relinquishing the rights," Landefeld says. Those rights were in fact the company's only assets, he adds.

Landefeld pressed fraud charges against Wiesner and Bachus through Frankfurt's public prosecutor and in the course of the proceedings was able to view his former business partner's criminal record. This shows that Wiesner had been convicted not only of delaying insolvency proceedings, but also other charges, including tax evasion and fraud. "Our investigations are still ongoing," states the Frankfurt prosecuting attorney in charge of the current case. The court is looking into whether to request legal assistance from the US or turn the proceedings over to the Americans entirely, because of possible false evidence given by Wiesner.

Wiesner himself prefers not to comment on the allegations. First he needs to travel abroad, he said in a short telephone conversation a couple weeks ago. His lawyer writes that the confidential agreement with Jackson doesn't affect MJ Net's rights. "Mr. Landefeld is not restricted in his rights or their implementation" and thus there is no basis for his legal complaints, according to the lawyer. In his legal action against Jackson, however, Wiesner claimed otherwise: He said that MJ Net sold, relinquished and conferred all rights, titles and shares of the agreement to Wiesner before bringing the suit.

Bachus, former chairman of the board at MJ Net AG, also declined to comment for this story, "since legal proceedings are still pending." Bachus filed a claim for $5 million with Jackson's executors in Los Angeles in March 2010. It seems the revenues created in the US by Jackson's tragic death won't let him rest either.

"The licensing rights we paid for are being unfairly exploited a second time," Landefeld believes.