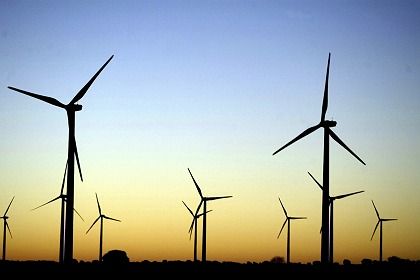 Don't accuse Spanish entrepreneur Miguel Salis of tilting at windmills. He co-founded Jazztel, a telecom startup that had the audacity to take on home market champion Telefónica. Now he is tackling Spain's national utility giants with an ambitious, independent, wind and solar power company that's scheduled to go public on the Madrid exchange this year with a $1 billion (€680 million) valuation.

Eolia Renovables de Inversiones, which Salis co-founded with Spanish investment bank N+1 in 2003, is pursuing a novel business model. Over the past two years, it has gobbled up more than 20 small wind and solar companies around Spain, creating in the process a kind of renewable energy mini-major. It has also bought two companies in Mexico and recently added wind farms in France and Germany.

Taking on the Goliaths of the Industry

The next step for the holding company -- which was originally code-named "David," as in David and Goliath -- is to kick up international expansion. Eolia aims to snap up medium-size independent wind companies elsewhere in Europe, the US, Mexico, and Latin America. Along the way it will be competing for choice properties with some of Europe's biggest utilities, which are racing to buy assets to meet exploding global demand for wind capacity.

"We are trying to compete against the biggest elephants in the world, very large industrial groups," says Salis, who serves as Eolia's chief executive. "We have a relatively small team, but we are very flexible, have capital, and can move very quickly."

Indeed, Eolia is taking part in what William Young, a wind analyst at London-based consultancy New Energy Finance, calls an "enormous global buying spree." Today wind represents less than 1 percent of energy generation capacity in big markets like the US. But the sector grew by 44 percent in 2007 and is expected to grow by at least another 28 percent this year, Young says. Capital expenditures for wind farms are expected to top $37 billion this year, jumping to more than $46 billion by 2009.

The Spanish startup isn't alone among players looking to roll up independents into portfolios. One rival is New York-based energy investment group Riverstone Holdings, which is seeking to raise some $4 billion to form a new alternative-energy company. Riverstone has hired John Browne, the former chief executive of BP, to help lead the charge.

But it is European companies that are so far dominating wind energy, says Mike McNamara, a senior analyst at brokerage Jeffries in London. "There are a few US players, but European companies have a fairly commanding position and are also increasing their position by buying assets in the US," says McNamara.

Eolia also brings a twist to the portfolio model. Rather than taking over companies outright -- and potentially losing their entrepreneurial leaders in the process -- Eolia swaps its own stock for shares in its takeover targets and then gives the businesses as much autonomy as they want. As a result, some 130 of its 180 shareholders are entrepreneurs whose wind projects are now part of a larger vehicle preparing to go public. (The remaining 50 are institutional investors, wealthy families, and individuals such as serial tech entrepreneur and Jazztel co-founder Martin Varsavsky.)

It's a formula that appeals to entrepreneurs, says Salis, a trained nuclear engineer who worked as an investment banker before starting Jazztel. While Eolia is still tiny compared to big utilities, by putting wind pioneers -- the people who grabbed the best land and industrial permits early on -- on the same team it can attain the scale needed to negotiate for scarce turbine equipment and win contracts to generate clean energy in countries under pressure to meet green targets, he says.

Eolia is competing for wind developers against European utilities such as Energias de Portugal, that country's biggest electricity utility, which purchased Horizon Wind Energy in Texas for $2.15 billion in March of last year. Another big rival is Spain's Iberdrola, which merged with Scottish Power and may itself be the subject of a takeover bid by French giant EDF.

Staying Ahead of Deregulation The need to go green is only part of what's fueling the wind frenzy. As the European Union deregulates the electricity market, utilities are expanding across national borders and looking for takeover targets. But many of the best wind farm sites have already been nabbed by small, local outfits.

Eolia aims to roll up as many of them as it can before the big boys arrive. In addition to giving entrepreneurs a piece of his growing business, Salis says one of the advantages he can offer them is access to capital and turbines, which are in tight supply. Eolia has signed contracts for turbines through the end of 2010 -- an advantage that analysts say could give it additional market power.

It also helps to be based in Spain, which ranks No. 3 worldwide in wind power production behind the US and Germany. In part that's due to government subsidies that have guaranteed operators of windmills and solar installations above-market prices for their power. But now Spain aims to reduce the subsidies -- one reason Eolia is casting its eye further afield. Jorge Mataix, chairman of Eolia investor N+1, says the company may target midsize wind developers in Germany, Denmark, and Britain, as well as in the Americas.

For all their ambitions, Eolia and other midsize renewables companies aren't likely ever to be as large as the oil majors or former state-owned utilities. Indeed, Eolia and its peers may be swallowed up someday by yet-larger firms. But in the meantime Salis is having a blast building his dream. "Wind is fast growing but very fragmented," he says. "We're well positioned to capture some of that growth."