Among economists, Marcel Fratzscher is considered to be particularly creative. As head of the German Institute for Economic Research (DIW), Fratzscher publishes more than almost any other economist in the German-speaking world and even politicians come to him for expertise. Indeed, he has been tasked by Economics Minister Sigmar Gabriel -- who is also German vice chancellor and head of the center-left Social Democratic Party -- with heading up a working group to examine how investments in Germany can be boosted.

Fratzscher's report, to be released on Wednesday, will likely garner the economist even more high-level attention. The study shows how Europe might be able to mobilize the kind of investment it badly needs, despite empty state coffers and the shackles imposed by the debt and deficit limitations of the European Stability Pact.

"We need an impulse to trigger growth in the crisis countries and to prevent the return of recession in the euro zone," Fratzscher says. He believes the recent proposal from France and Italy, which have insisted that stability rules be adjusted to allow for more investment, have merit as long as the debt rules are not weakened.

The DIW proposal adheres to the long-held economic axiom that today's investments ensure future growth -- that money left unspent on new technology or facilities today will not still be available tomorrow. Since the beginning of the financial crisis, gross fixed capital formation -- a macroeconomic measure of investment -- has dropped by 14 percent in the European Union and by 15 percent in the common currency area, DIW researchers have determined.

But simply ratcheting up public expenditures, as some Southern European governments have advocated, is not a sound strategy for improving the situation, the institute believes. "One of Europe's biggest weaknesses is the lack of private investments," Fratzscher says. "We have to close the gap by way of a European investment agenda."

At stake, according to the institute's calculations, are significant sums of money. The complex formula they used initially involved ascertaining on a country-by-country basis how much money would have to be spent on machines, factories, highways and bridges to generate decent growth improvement. They then compared that number to the total amount actually disbursed. The difference is the investment gap.

Germany too invests far too little. The gap, as DIW researchers determined last year, represents fully 3 percent of German gross domestic product (GDP). In other words, companies in the country, together with the state, would have to spend an additional €80 billion a year to improve the country's growth perspectives.

DIW's current study takes a look at the entire euro zone. The result: Many other countries have fallen short on private and public investment. By far the biggest gap can be found in Ireland, with the Netherlands in a distant second. Germany's gap between 2010 and 2012 averaged out at 3.7 percent of GDP. Belgium and France came out with the lowest gaps in the DIW study.

One particularly interesting aspect of the study is that deficient investment is not a problem reserved for euro-zone countries in crisis, rather it is prevalent across the common currency area. Taken together, the euro zone's investment gap is 2 percent of GDP, or around €200 billion annually.

The roots of weak investments in Europe stretch well back into the past. Even before the outbreak of the financial crisis, DIW writes in its study, "the modernity and expansion of Europe's capital stock in almost all sectors remained well behind that of other OECD member states." The deficit was particularly large in the areas of health and education. "But even industry, which is supposed to play a key role in the re-strengthening of Europe, is affected by weak investment."

The DIW believes that ongoing uncertainty about economic developments can be blamed. Many banks have refused to hand out loans out of fear that they will never see the money again. And deeply indebted states, prevented from going even further into the red by the Stability Pact, cannot jump into the breach.

Instead, the institute recommends that the European Union take the lead in addressing the problem. Essentially, the DIW plan is akin to a double bypass, seeking as it does to circumvent both impoverished governments and ailing banks by creating a vast European investment fund. It would be temporary -- limited to, say, five years -- and would make money available to companies in need of investment loans.

The hurdles to bank loans are particularly high in places like Spain and Greece, but the DIW does not believe that investment funds should be concentrated there. "The fund should work with neither regional nor sector-related restrictions," the report reads. Instead, the institute continues, it is decisive that productive private investment be boosted, "irrespective of the EU country."

Fratzscher and his team envision a fund worth at least €100 billion and administered by the European Investment Fund (EIF), which is situated in the European Investment Bank. Currently, EIF activities are limited to distributing venture capital to financial institutions that are involved in small and mid-sized companies. DIW believes the new fund could take advantage of the EIF infrastructure that is already in place.

National development banks, such as Germany's state-owned KfW Development Bank, would then be responsible for distributing the money to loan recipients. In places where such banks don't exist, private or state-owned banks could take on the task.

'We Have to Mobilize It'

But where is the money supposed to come from? Fratzscher proposes that the fund be allowed to take on debt by issuing its own bonds, which would then be backed by the countries that take part. That would result in top ratings on capital markets and would grant the fund cheap access to liquidity. The interest-rate advantage would then be passed on to loan recipients.

But it is likely to come paired with significantly higher risks and a greater number of defaults. Liquidity problems tend to sneak up on companies much more quickly than they do countries. Nevertheless, Fratzscher doesn't believe that the new fund will result in losses for the stakeholders. "I believe that such a fund would at least break even in the end," he says.

DIW also doesn't think that the fund would encounter difficulties finding enough investors to snap up its bonds. Taken together, some €300 billion is saved each year in the euro zone, representing some 2.5 percent of its economic output. "The financial resources are there for a significant increase in private investment," Fratzscher says. "We just have to mobilize it." 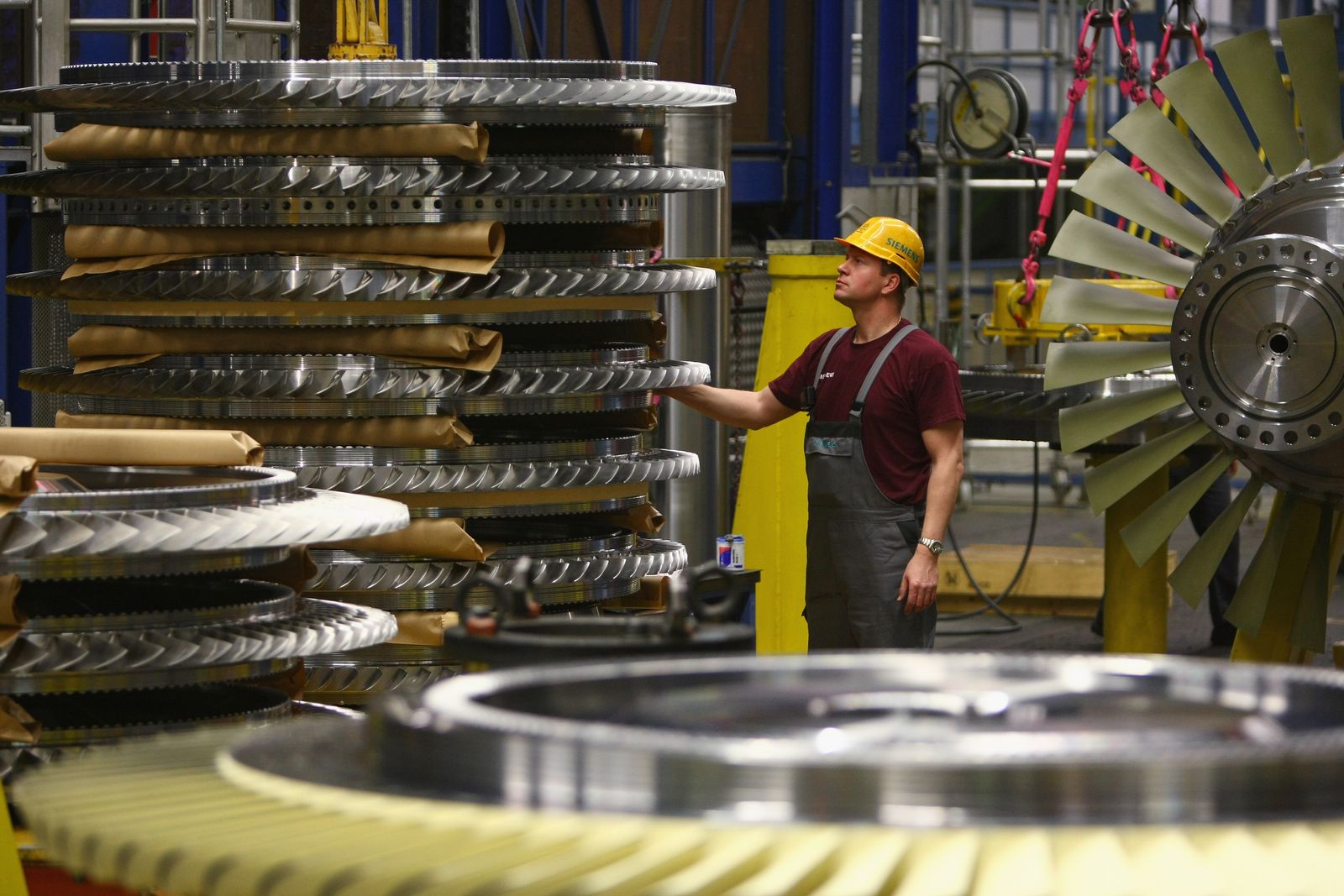 A worker in a gas turbine factory in Berlin: Even German companies aren't investing enough. 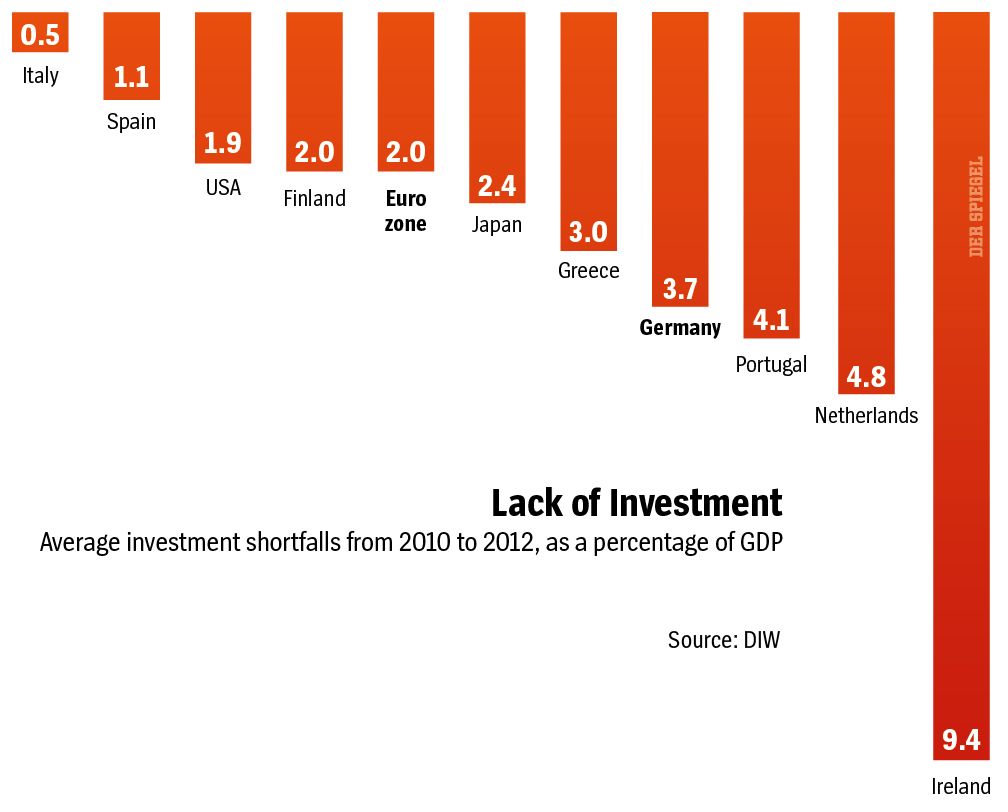 Graphic: Investment shortfalls around the world.