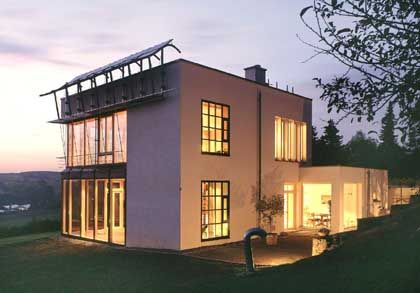 Passive homes have little need for conventional heating systems: they use no more than three liters of heating oil per square meter each year.

At first glance, the row of homes in Mannheim's Gartenstadt neighborhood looks anything but spectacular. The buildings along Freyastrasse in the German city are classic two-story, pre-war architecture: 24 apartments with a total of 1,300 square meters (14,000 square feet) of living space, built during the early 1930s. The complex has since been renovated -- but the changes are technical rather than aesthetic. The building has become an energy-efficiency wonder -- a three-liter house.

Heating the apartments requires no more than the equivalent of an annual three liters (0.8 gallons) of heating oil per square meter (10.8 square feet). It's a striking degree of energy efficiency for a historical building. Even newly constructed homes are legally allowed to consume twice as much under German law.

The working class housing complex in Mannheim is a pilot project. The GBG construction company wanted to show just what can be achieved through the renovation of historical buildings. Scientists at the University of Stuttgart provided their expertise during the planning and construction of the apartments.

Under German law, buildings are required to have a minimum of 12 centimeters (4.8 inches) of insulation on their facades, but for this complex, GBG used 20 centimeters. The insulation on the cellar ceiling is four times as thick as the legal requirement. The windows are also more rigorously insulated than building regulations demand.

When the basic construction was completed, the building's energy efficiency was even tested by means of a so-called "blower door test." It involves artificially reducing the air pressure inside the house relative to the air pressure outside and then testing how quickly air enters the building. The test ultimately shows the degree to which the air-permeability of the building's walls has been reduced.

The building's energy needs were reduced by an astounding 90 percent, GBG announced proudly. But that kind of efficiency is still rare when it comes to historical buildings, which often consume between 20 and 25 liters (5.36.6 gallons) of heating oil per square meter each year. Consumption levels of 30 liters or more are not unusual.

Cutting heating oil use to 3 liters may sound like an amazing achievement, but there is still room for yet greater energy efficiency. The Viebrock construction company in the German state of Lower Saxony, for example, is now building houses that consume only two liters of heating oil per square meter. About two-thirds of the roughly 1,300 new buildings Viebrock constructed last year were energy-efficient.

In recent years, building planners and architects have shown tremendous creativity in the competition to provide the greatest possible independence to consumers from rising energy costs. 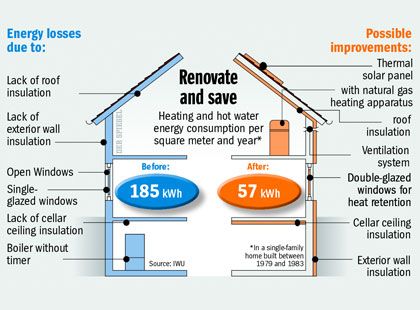 Graphic: Renovate and save

So-called "passive" houses, for example, make do with less than an annual 1.5 liters of heating oil per square meter. The name "passive house" derives from the fact that the homes hardly require regular (active) heating anymore. The heat released by small appliances and the body heat of the inhabitants -- which amounts to no less than roughly two kilowatt hours per person and day -- is largely sufficient. Automatic ventilation -- with a built-in heat retention system, of course -- ensures that the rooms don't get too stuffy.

The term "passive house" was coined by construction physicist Wolfgang Feist, who directs his own Passive House Institute in Darmstadt near Frankfurt. These days the term is widely used in the German construction business.

Feist built Germany's first passive house in Darmstadt in 1991. Then, in 1999, he began building multifamily homes, followed by entire energy-efficient housing complexes. The world's largest passive office complex is called "Energon" and was built in Ulm in 2002. Today more than 6,000 passive buildings exist in Germany, Austria and Switzerland. They include residential complexes, office buildings, factories, day-care centers and schools.

Passive homes are by no means the only energy efficient houses in Germany. The government also promotes energy efficiency by providing financial incentives to consumers who build homes that conserve. Like "passive houses," the abbreviations "KfW 60" and "KfW 40" are also a regular part of construction industry parlance these days. They stand for new homes that have annual energy needs of below 60 or 40 kilowatt hours per square meter, and Germans who set out to build homes meeting these requirements are eligible to apply for subsidized loans from the government-owned KfW bank.

Homes that give rather than take

The country has also seen a new trend in the construction of so-called "positive energy" houses, a term that has its own registered trademark. First developed by Freiburg-based solar panel architect Rolf Disch, "positive energy homes" refer to buildings with negative enery consumption: They actually produce energy."

Of course these houses also need to be heated during the winter. But that's done in a highly energy-efficient manner: Their annual heat energy requirements amount to just 11 to 14 kilowatt hours per square meter (10.8 square feet).

Positive energy houses produce their surplus of electricity by means of solar panels installed on their roofs. And electricity that is not used by the resident is then fed into the power grid. These buildings fully deserve the "positive" in their name, since they provide more energy in the course of a year than they consume in the form of gas, electricity or other energy sources.

Disch emphasizes that such buildings are financially attractive too: Their inhabitants receive a " monthly energy income." That income may not be very high, but it certainly is attractive in times of rising energy prices: "Additional costs turn into an additional income."