It's a proud building with a height of 259 meters -- 300 meters including the antenna --making it the highest skyscraper in Germany and the third-highest in Europe. It was designed by Sir Norman Foster, the star architect. This building exudes the ambition of a company that wants to display its wealth and its power, and that wants to play in the big league. 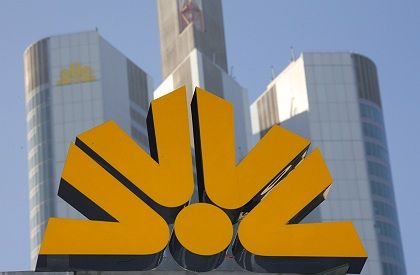 But things have gone wrong for Commerzbank. Its proud tower is about to become the tallest branch of the federal government since last week's announcement that it will be partially nationalized.

Berlin is taking a €10 billion stake in Commerzbank, an investment that will it direct influence in the business operations and structure of a major German commercial bank. The government will also become the guarantor of the planned merger between Commerzbank and Dresdner Bank, acquired by Commerzbank in a deal arranged last year.

The financial crisis has reached a new level. Until now, the government had administered its capital injections as cautiously and selflessly as it could in a bid to revive the ailing banking sector.

Now the maxim has changed. The Commerzbank deal has turned the government into the most important shareholder in Germany's second-largest private sector bank. Berlin will have two representatives on the supervisory board and its 25 percent stake gives it the power to block every major decision Commerzbank's management board takes in the future.

"I can only congratulate Herr Steinbrück," Chancellor Angela Merkel said in a speech to business leaders last Friday, referring to Finance Minister Peer Steinbrück. "At last the banking package is working."

That's a pretty euphoric interpretation of a rather sobering development. After all, Commerzbank has had to be rescued twice in the space of just a few months.

European bank stakes acquired by governments so far in the financial crisis.

That might explain why the deal got a muted response in the financial markets. Commerzbank's stock plummeted at the end of last week and rival banks grumbled about "competitive disadvantages in the credit business," while many people saw the government's stake purchase as a disturbing sign that the financial crisis is getting worse.

The last time the state bought a stake in Commerzbank was 80 years ago, in the summer of 1931, at the height of the global economic crisis. At the time the government wanted to demonstrate that it remained capable of taking action, and it's no different today.

The government wants to prove that its rescue package for the financial sector can effortlessly master even the biggest challenges. The message is that if the banks don't provide the economy with enough credit, the government will step in and find alternative ways to get credit flowing.

The government's stake purchase shows that nothing is impossible in this crisis now. Only half a year ago it had seemed inconceivable that a major German bank would be partially nationalized. And only recently, Steinbrück had declared that the government would under no circumstances exercise "strategic influence on the banking sector."

When Commerzbank first asked for government assistance last November, the government's financial market stabilization fund, known for short as Soffin, provided €8 billion without taking a stake in the bank.

But just before Christmas it became clear that that injection would not suffice. Dresdner Bank in particular had just finished a disastrous fourth quarter. It has so many bad securities on its books that government experts described the bank as "toxically charged." At the end of June the bank still had structured securities worth at least €31 billion. The subsequent writedowns narrowed its capital base to such an extent that the merger with Commerzbank was suddenly in danger.

Merger Was in Jeopardy

The government wanted to prevent the collapse of the merger at all costs because that would have caused fresh panic in an already nervous financial sector. In addition, the Allianz insurance group, which still owns Dresdner, would have been hit by billions of euros in losses.

At 3:30 p.m. they agreed to provide Commerzbank with a fresh cash injection of €10 billion. According to Blessing, that money will make Commerzbank "even safer", but it's not an especially attractive deal for taxpayers. In return for a direct capital investment of €1.8 billion and a silent deposit totaling €16.4 billion, the state is merely getting a stake of 25 percent plus one share, even though Commerzbank's current market value is less than €3.6 billion.

The government doesn't just see the stake as a way to build trust in the new bank. It's also intended as a precautionary measure. "We want to protect our and the taxpayers' money," one finance ministry official said.

The government was worried that private speculators could buy up Commerzbank and plunder the state's investment of €18 billion -- with the government's blocking minority, that's no longer possible.

The government is convinced that it has invested its money well. The bank is committed to repaying the silent deposits as soon as it's able to. But that's likely to take some time. In its best year, 2007, Commerzbank earned a net profit of €1.9 billion.

The government wants to sell its 25 percent stake when Commerzbank has recovered and its share price has risen significantly from last Friday's level of €5. High-ranking government officials estimate it will take at least three years for the stock to recover.

Until then, the government wants Commerzbank to do something that Germany's banks are singularly failing at -- lend money. Commerzbank has recently been paying out more loans to small and medium-sized businesses than any other bank. "In the last few months it has been aggressively offering favorable terms to woo customers that had been turned away by other banks," said Brun-Hagen Hennerkes, head of the Foundation for Family-owned Businesses.

That's what the government wanted. Blessing recently even launched a special credit program for medium-sized firms. But if the recession begins to bite, the companies' credit ratings will deteriorate and the bank will have to set more capital aside for its loans to meet banking sector regulations. That's why Commerzbank needs more cash from Berlin. "We now have enough of a cushion for the future," said Blessing.

It's certain that the merger between Commerzbank and Dresdner would have collapsed without the fresh money. Allianz as the only solvent partner would have had to inject a lot more cash to prevent Dresdner Bank from going under, and may have even have got into trouble itself.

But worst of all, Finance Minister Steinbrück would have had to abandon his dream of having two internationally competitive German banks. It's true that the new Commerzbank including Dresdner Bank has turned out to be a colossus with feet of clay. But its sheer size has inspired the government's hope that things will get better at some point.

The partial nationalization isn't just aimed at helping Commerzbank The government above all wants to revive its financial sector rescue plan in the face of growing criticism. The problem is that the package with its €400 billion in state guarantees and additional €80 billion in equity assistance has so far failed to restore the banks' trust in each other -- the banks are still refusing to lend each other meaningful sums of money.

As a result, many experts are calling for a fundamental revamp of the government's financial sector rescue package launched late last year. Some are even demanding that banks be forced to participate. But Steinbrück insists that participation remain voluntary.

Even before it received the latest infusion of government cash, Commerzbank had become the government's darling by successfully offering Germany's first state-guaranteed bond with a volume of €5 billion. It can now lend this money to companies.

Steinbrück now hopes that other banks will follow Commerzbank's example and take refuge under Berlin's umbrella. There's no shortage of possible takers, such as regional bank HSH Nordbank. The Hamburg-based bank has already obtained €30 billion in liquidity guarantees from Soffin.

HSH head Dirk Jens Nonnenmacher has little room for maneuver. Insiders expect the bank to report a loss of around €2 billion for last year. The former math professor wants to restructure his balance sheet by ridding the bank of risky assets totaling up to €80 billion. And even if manages to do so it's not clear that the bank will be able to survive.

Last Thursday, HSH executives were again summoned to Soffin to discuss a bond issue and the bank's revamped business model. An equity injection of the type Commerzbank has received wasn't discussed, although insiders say it may happen any day now.

But time is running out, and the bank's owners are getting nervous. The savings banks of the northern state of Schleswig-Holstein that own a stake in HSH are neither willing nor able to pump another euro into the bank. And the governments of Schleswig-Holstein and Hamburg that also own stakes are arguing about who's responsible for the debts.

Nonnenmacher's counterparts in other regional banks aren't much better placed. Analysts say Landesbank Baden-Württemberg may also need a capital injection from Soffin. Two teams of experts are currently scrutinizing the bank and will submit their reports on its financial health at the end of the month.

The biggest unknown is whether market leader Deutsche Bank will need assistance, despite assurances to the contrary from its chief executive, Josef Ackermann. Deutsche Bank had a grim fourth quarter. But Ackermann wants at all costs to avoid asking Soffin for help. His strategists appear to be toying with the idea of getting additional funds if necessary from private investors or foreign state funds. The bank has declined to comment on that.

The German government's purchase of a stake in Commerzbank could now exacerbate Deutsche Bank's problems. How should it respond if its rival uses its new-found strength to gain a competitive edge?

If Deutsche Bank doesn't succeed in getting fresh money, the bank will have no alternative but to ask Soffin for help. "Then Ackermannn would probably have to quit," said one Frankfurt banker.