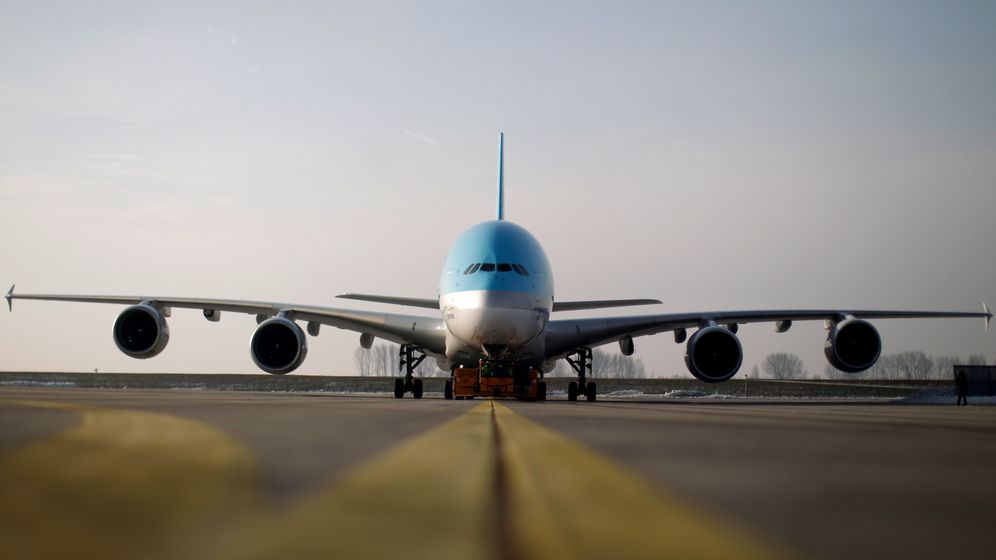 Photo Gallery: Repairing the Airbus A380

The short, wiry engineer scribbles the names of complicated components onto a pad of paper. He cheerfully explains how they work. The warm spring wind of southern France is blowing through the window. But the floral Advent arrangement on the sideboard behind him is gathering dust. The engineer, a Scotsman, has been so busy since Christmas that he hasn't had time to clean up the conference room.

In the middle of the winter vacation period, his technicians alerted him that they had found cracks in the wing of an aircraft -- not just any aircraft, but the A380 superjumbo, European aircraft maker Airbus's flagship model. At that moment Tom Williams, the executive vice president of programs at Toulouse-based Airbus, realized that his holiday was over.

Since then, he has been pushing his engineers to figure out how the cracks could have developed and how they can be rectified. But the real question is: Whose fault is it? "Ultimately, I'm responsible for this," says Williams, 59, as he twists his cufflinks, which feature an engraved horse's head.

His boss Tom Enders was furious. "We screwed that up," the future CEO of Airbus parent EADS said at the Singapore Airshow in February. But it would be easy to assign most of the blame for the wing debacle to Tom Williams. More than 10 years ago, the Scotsman took over a team of 900 people tasked with developing the innovative wings for the world's largest passenger plane. Now Williams has become the victim of a development that makes the construction of airplanes, especially such large ones, a hard-to-predict economic adventure, as airlines are demanding that aircraft manufacturers produce increasingly fuel-efficient planes. This creates a dilemma for engineers, especially with the A380, because they were also expected to design the giant new Airbus to be even bigger than the Boeing 747 jumbo jet.

The laws of physics also apply to experts in aerodynamics, engine engineers and materials scientists at Airbus. When an aircraft becomes bigger and heavier, the size of the turbines and wings also increase, which in turn increases weight and fuel consumption. On the other hand, the European megaliner was also required to be 20 percent more efficient than the competing Boeing 747. This was almost impossible to achieve, given that the giant plane was already substantially overweight before it even left the factory.

As a result, Williams and his creative engineers were told to subject the A380 to a radical diet. They used innovative composite material and extremely lightweight aluminum alloys, even for important parts of the wings. But now the results of this effort to economize are coming home to roost, as hairline cracks, some as long as a centimeter, are forming in the connecting elements between the inner frame and the outer skin of the wings.

From his office, Williams can see the buildings in Toulouse where the final assembly of the A380 takes place. At the site, known as Station 45, heavy hydraulic legs lift the wing, which is almost 40 meters (131 feet) long, and bring it into position against a two-meter seam on the fuselage. The plane being assembled on this morning is numbered MSN089. But before the wings are attached to the aircraft, engineer Paul McKenzie stops the hydraulic system. McKenzie is responsible for production and is feeling a little uneasy at the moment, because his workers are installing parts with a built-in material defect. "All the wings that we are now delivering will have to be repaired later on," says McKenzie.

The gaunt British engineer sticks his head into a porthole on the underside of the wing and shines a flashlight inside. A cross strut becomes visible in the light beam, one of the 60 ribs that support the aerodynamic shape of each wing. "These are precisely the ones that are causing all this trouble," says McKenzie.

The ribs are made of innovative composite materials containing carbon fibers. "The corresponding brackets are the real problem," McKenzie explains. They connect the cross strut with the outer skin of the wing and are made of an especially lightweight aluminum alloy, which has the unfortunate drawback that it is subject to cracking in this particular location. By using these high-tech materials, the Airbus engineers were able to reduce the weight of the aircraft by a few hundred kilograms, which is considerable. They did not see the use of the materials as a risk. "We've used this alloy in many other aircraft in the past," says A380 designer Williams.

The problem is that the aluminum in the brackets begins to crack after a few hundred takeoffs and landings. A somewhat larger gap between the base and the outer skin also plays a role. "We're talking about less than a millimeter," says McKenzie. But this apparently resulted in the excessive strain. The wing of the A380 is exposed to tremendous forces so that, during flight, the tip can bend upward by more than two meters or downward by one meter. Huge temperature differences are also a problem. "When the aircraft is sitting on the tarmac in Dubai, the material heats up to 70 degrees Celsius (158 degrees Fahrenheit)," says Williams. "And while flying at cruising altitude, it cools down to minus 50 degrees Celsius (minus 58 degrees Fahrenheit)."

According to Airbus, the damage to the wings is not very dangerous, because there are 4,000 of the brackets in question. Nevertheless, the hairline cracks have to be repaired, and the large number of defective brackets makes it a costly and complex procedure. First the kerosene has to be drained from the tanks. Then the mechanics climb through the small portholes and into the wing. "With my narrow shoulders, I can get in, but people who are too broad can't do the job," Williams says.

Before the repair begins, the wings have to be jacked up to relieve any structural tension. "Then we cut out the parts and insert new ones," the engineer explains. But simply replacing the brackets is not a permanent solution to the problem, he adds, because hairline cracks can also occur in the new brackets. Because the same alloy is still being used in production, the repair remains a patchwork solution. "We will be dealing with the entire problem for years to come," says Williams.

He and his engineers are under a lot of time pressure. More defective wings are constantly being produced at a plant in Broughton, Wales -- wings that McKenzie and his team then attach to the fuselages in Toulouse -- and later have to repair. Williams plans to present management with a permanent solution in April. That solution will presumably involve the use of a stronger alloy, although it will first have to undergo the usual approval procedure. Installation of the new parts is expected to begin by the end of the year. The A380 will gain about 90 kilograms as a result.

How much the troublesome wing cracks will ultimately cost Airbus parent EADS remains to be seen. The company has currently earmarked in its budget more than €100 million ($131 million) for the costs of repairing all aircraft produced by the end of 2012. But that amount could quickly double or even triple if the planes, which are very popular among passengers, require further repairs. Mechanics at Australian carrier Qantas assume that the procedure will take two weeks, which Airbus is unwilling to confirm. Dubai-based Emirates has already demanded €60 million in damages for the amount of time already lost for repairs. Competitor Qantas states: "Qantas has no plans to ask for compensation from Airbus." Secret negotiations over compensation are allegedly underway with Singapore Airlines, but Airbus had no comment.

Executive Vice President of Programs Williams portrays the cracks as one of the typical growing pains that always afflict new aircraft. "You just have to get through it," he says. "Boeing faces similar challenges." But the A380, as the representative of a new class of aircraft, was under more scrutiny from the start. Is the obsession with bigger and bigger aircraft worth the trouble? "Don't get in your rival's way when he's making mistakes," the legendary former Boeing executive Harry Stonecipher said when Airbus decided to build the A380.

Boeing is convinced that the future belongs to the somewhat smaller long-range aircraft that carry 300 passengers, and not to the giant, 600-seat superjumbo, because passengers prefer to be flown directly to their destinations instead of to major hubs like London. In fact, things could be better for the A380. The bad news began with problems in the wiring of the giant jet. At the end of 2010, an engine exploded on a Qantas Airbus near Singapore. The shrapnel from the disintegrating turbine penetrated the wing, and shocked Qantas mechanics later discovered marks showing that it had also scraped along the fuselage. It was a stroke of luck that the fragments did not slice through the cabin like a knife cutting through butter.

After that near-disaster, the hairline crack issue has become the latest of the superjumbo's problems. The A380 has not even contributed to the company's bottom line yet. At first, Airbus officials said that it would have to sell about 250 aircraft to recoup its costs. That number was later almost doubled. Now Airbus executives aren't even citing a break-even sales figure anymore, and for good reason. According to the latest estimates by aviation experts, the company will have to sell at least 600 units of the world's largest aircraft to make a profit. But with a total of 253 orders on its books so far, Airbus is still a long way from that target.

The order books also reveal a major weakness. Although Airbus sells large numbers of smaller aircraft like the new A320neo, it is having trouble finding buyers for its long-range aircraft. Last year, airlines ordered only 19 A380s. Contrary to Airbus's expectations, no orders at all were placed for the A380 at the most important Asian aviation convention in Singapore in mid-February. Instead, the airlines ordered their large aircraft from Boeing, especially the B777, a top seller among long-range aircraft.

Airbus executives find some comfort in the fact that Boeing is currently having trouble selling its 747. But the US competitor also appears to have drawn the consequences from weak sales of the 747, announcing plans to develop an even longer version of the twin-engine 777. It would carry more than 400 passengers, or about as many as a jumbo jet.

With few comparable models in its current lineup, Airbus is working on a redesigned A350 long-range model to fill the gap. But the new aircraft will not be ready for delivery until at least 2014. Meanwhile, the struggle to reduce aircraft weight continues, as does the conflict between two engineering cultures: Should engineers use even more of the new high-tech materials to save weight? Or should they stick with tried-and-true materials to avoid unpleasant surprises like the hairline cracks in the A380 wings?

Williams warns against erring too much on the side of caution because of just this one disaster. "If we had never dared to embark on new paths, aircraft would still be made of wood and canvas."