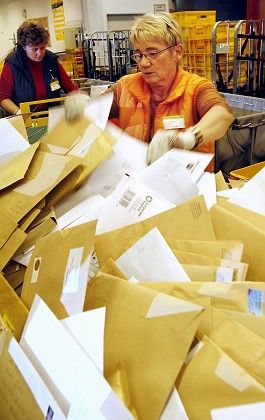 Deutsche Post employees sort letters in the Erfurt mail center. Thousands of staff at the former monopolist could lose their jobs as a result of market liberalization.

Sending a letter in Germany used to be such a simple thing. You put your letter in an envelope, slapped on a stamp, and popped it in the familiar yellow Deutsche Post mailbox. End of story.

But not for much longer. Deutsche Post is about to lose its monopoly on the postal service. And after that, customers will be able to choose from new green, red and blue postboxes on the street as well as old yellow.

As part of a European Union move to introduce greater competition in letter delivery services, Germany on Jan. 1, 2008 will abolish Deutsche Post's exclusive right to deliver letters under 50 grams -- the last monopoly left for what used to be the only game in town.

Putting their Stamp on the Business

Firms are lining up to get a piece of the action -- and it is considerable. Around 72 million letters are posted each working day in Germany -- almost one for each member of the population -- and the domestic letter delivery market is worth a total of €23 billion ($31.4 billion) a year, according to the German Association for Post, Information Technology and Telecommunication (DVPT). Delivery of letters under 50 grams -- the segment affected by the end of Deutsche Post's monopoly next year -- accounts for just over €10 billion of that total.

Deutsche Post's competitors have been multiplying -- and growing in strength -- over the last few years as the postal services market has become incrementally liberalized. The former monopolist currently has a staggering 750 competitors for letter delivery, who have about a 10 percent share of the market for letters under 50 grams. At the moment they can only deliver this class of letters under strict conditions -- for example, they must offer extra services, such as collecting mail directly from the sender.

Most of the competing firms are small regional operators. In terms of the big boys, analysts expect that only one or two companies will be able to succeed in competing with Deutsche Post on the national level. The contenders are Luxembourg-based Pin Group, whose green-clad employees are already a familiar sight in Berlin, and TNT Post, a joint venture between the former Dutch monopolist TNT Post BV and the German Hermes Logistics Group.

Both groups are currently building up their postal networks in Germany, buying up regional operators and integrating them under their brands to ensure blanket coverage.

And Deutsche Post is taking them seriously. The firm has warned analysts that it could lose up to 20 percent of its market share by 2009 or later. To cover lost revenues in the future, it is expanding into other European markets and offering value-added products such as direct marketing services.

The company is also slashing costs. And in an industry where personnel costs make up 60 percent of total expenditures, that can easily translate into job losses -- which is why tens of thousands of Deutsche Post employees took to the streets in Berlin in May to call for the company's monopoly to be retained if other EU states did not open their markets. 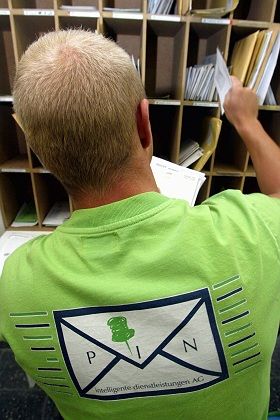 Deutsche Post spokesman Dirk Klasen told SPIEGEL ONLINE that the firm is hoping to avoid making any job cuts. But if the company can't make up its lost market share elsewhere, then heads will have to roll. And 20 percent lost market share means 20 percent fewer staff -- in other words, 30,000 jobs from Deutsche Post's 150,000 staff in Germany are potentially at risk.

There is little love lost between the former monopolist and the new competitors. For Deutsche Post, the newcomers are money-grabbing exploiters, while the new kids in town see Deutsche Post as a lumbering dinosaur with high prices and outdated bureaucracy.

All the companies say that they just want a level playing field -- but they differ about what that means. In the Deutsche Post corner, Klasen complains about competitors engaging in "wage dumping." "Many of our competitors pay very low wages of €5-€6 per hour," he says, pointing out that an employee starting out at Deutsche Post makes €10.40 an hour. Similarly, German services union Ver.di recently accused TNT Post of using "child labor when it advertised for teenage delivery workers in the state of North Rhine-Westphalia.

Klasen would like to see a minimum wage introduced in the letter delivery sector to ensure fair competition. Germany already has minimum wages in certain industry sectors but not across the board. Chancellor Angela Merkel's government recently decided against introducing a national minimum wage.

He is also critical of a recent European Union decision to postpone complete market liberalization until 2011 -- two years later than the European Commission had proposed. "It's not fair if we have an open market here in Germany but France or Spain close their markets to foreign competition," he says. Deutsche Post is already present in the letter delivery market in the United Kingdom and the Netherlands and has plans to expand into other countries.

Meanwhile the competition complains about unfair advantages for the former monopolist. They bemoan the fact that Deutsche Post's letter services are currently exempt from value-added (sales) tax, because of the company's obligation to provide a "universal service" -- in other words, to guarantee that a letter will arrive to any address in Germany.

"We just want to operate under the same conditions as Deutsche Post," Pin Group CEO Günter Thiel told SPIEGEL ONLINE. Pin may be disappointed though -- according to a report Monday in SPIEGEL, the German Finance Ministry plans to keep the tax break for Deutsche Post even after market liberalization.

Irrespective of how level or not it becomes, the playing field is certain to be a bloody one. All the big players are busy planning their strategies for the postal free-for-all and looking for creative ways to make more money. One company in the city of Bremen, for example, is trying to attract customers on the move by providing special postboxes in buses and trains.

And Pin is looking at innovative ways to expand its outlets. SPIEGEL reported recently that the company is in talks with the Sparkasse banking group with the aim to opening up counters in bank branches where customers can use postal services. Pin is not commenting on the ongoing negotiations, however.

The company could certainly do with a few more branches. Although Thiel says Pin's goal -- as part of its plans to achieve "two-digit" market share -- is to have a network "at least as dense" as that of Deutsche Post's, the company still has some way to go. Founded in 1999, Pin Group currently has over 7,000 employees in Germany and delivers about 2.3 million pieces of post everyday. The company has around 500 branches in Germany, while Deutsche Post has a massive 12,500 -- and, with an eye to taking on the competition, has just announced plans to open another 600.

A Race to the Bottom?

The one thing that everyone is agrees on is that services will be cheaper after market liberalization. "We are assuming that prices will come down," says Elmar Müller from the German Association for Post, Information Technology and Telecommunication (DVPT), which represents the interests of consumers.

Mind you, the difference in price for letter delivery will only be a few cents -- which means that for private individuals, the changes may not actually mean that much, seeing as an average German household only spends €4.50 a month on letter post. But for business and institutional customers with large volumes of mail, a few cents saved on each letter makes a big difference -- which is why Pin has already snared desirable customers such as the city of Berlin.

Müller told SPIEGEL ONLINE that he fears a race to the bottom. He says a price war between competitors would lead to a decline in quality, given that letter delivery is so labor intensive. "If you pay badly, then it's difficult to get good staff," he says. "We hope customers will not just differentiate on price but also on quality and reliability, and we hope companies do not compete with price dumping in order to make a quick profit."

However, Thiel has another explanation for Pin's prices, which he says are up to 20 percent lower than Deutsche Post's on average. He attributes Pin's low prices to synergies with the company's shareholders -- German publishing giant Axel Springer recently acquired a majority stake -- and the company having lower administration costs and lean management. "We don't have the same 'civil servant' apparatus as Deutsche Post," he says.

It is a charge that Klasen vehemently rejects. "That might have been true 20 years ago, but things have changed a lot since then," he says. The majority of the company is now privately owned, he points out, and the company only has 60,000 civil servants left, out of 520,000 staff worldwide. "If we had a 'civil servant' culture, then we couldn't compete on the global market," he says.

But before everyone gets too excited about the profits to be made from letter delivery, they should bear in mind that the letter delivery market won't grow forever. Klasen points out that letter post is being replaced internationally by e-mail and mobile phone text messages, as part of a trend known as electronic substitution.