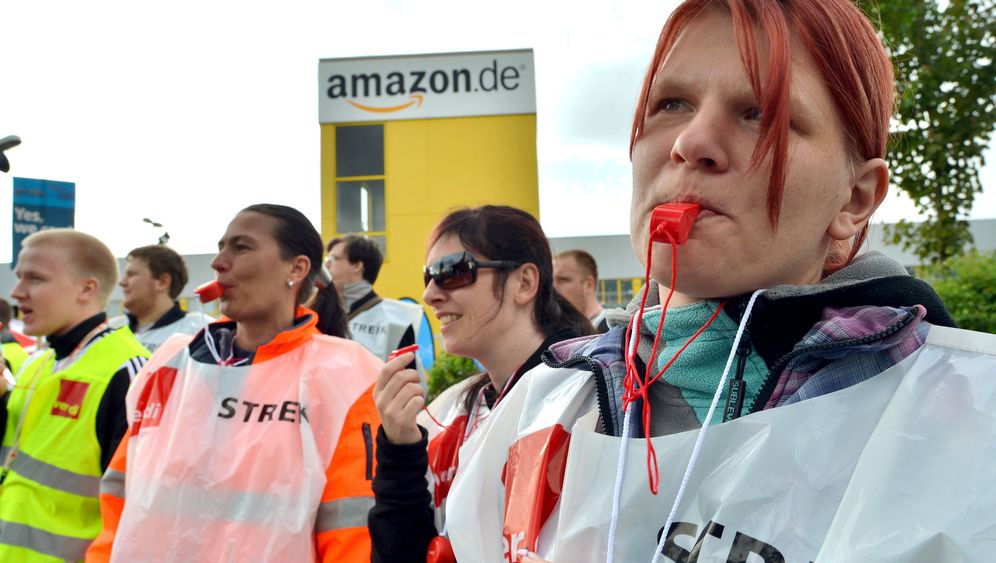 Steffen Jacob recently had an odd encounter with management. The 49-year-old has been working for online retailer Amazon since 2008. Jacob is a warehouse stower at the company's logistics center in the eastern German city of Leipzig -- and he represents the employees' interests.

It was these interests that were supposed to be on the agenda of a meeting called by workers to urge Amazon to commit to a wage agreement. But company management didn't bring along any wage experts or accountants from the controlling department. Instead, they showed up with a lawyer who said point-blank that there would be no wage deal. The German employees of the US company refuse to accept that. Last Tuesday, workers walked out in protest at Amazon's two largest distribution centers in Germany: at Leipzig and in the central German town of Bad Hersfeld. It was the first strike in the online retail giant's history.

It's not as if employees are being paid peanuts. During their first year of employment, they earn over nine euros ($11.55) per hour, and employee representative Jacob receives €10.56, plus bonuses and shares after two years with the company. But there's a catch: Amazon can cut these wages at any time. Although the company currently gears its pay scale to Germany's sector-wide wage deal for the logistics industry, it is not bound to maintain wages at that level and has refused to join a collective bargaining agreement for the country's retail sector. In other words, employees have no reliable guarantee for their income.

US Firms vs. German Labor Laws

Amazon is playing according to its own rules, and thus finds itself in the best of company with numerous other US corporations that have difficulty accepting Germany's so-called "social partnership," which is the traditional relationship that exists between employees and employers.

US technology giant Apple tried for months to prevent works councils -- the powerful bodies that represent employees inside a company -- from being established at the firm's own sales outlets. And even after the works councils were set up, its members dared to make only anonymous statements in the public sphere.

US retail chain Wal-Mart failed in Germany in part because it misjudged German labor laws. Wal-Mart banned its employees from having romantic relationships, or even flirting with each other. They were also urged to wear a permanent smile, and the company didn't understand why this was perceived as an infringement on their personal rights.

US conglomerate Honeywell put plans in place to close a plant in the eastern German city of Fürstenwalde -- without consulting the works council or giving any thought to severance schemes, both of which are required by the Works Constitution Act, the legislation that governs the system of workplace labor relations in Germany.

Fashion chain Hollister, which is owned by Abercrombie & Fitch, used cameras to monitor its employees -- and paid no attention to the issue of whether this was compatible with German data protection guidelines. After each shift, employees are frisked and their bags are checked as if they were potential shoplifters.

All of these companies have one thing in common: They have their problems with Germany's particular brand of capitalism, known as the Soziale Marktwirtschaft, or social market economy. They view employee representatives with suspicion, and they see the worker participation enshrined in the Works Constitution Act as a hurdle that has to be sidestepped. Furthermore, they get around Germany's dismissal protection laws by giving short-term contracts to as many workers as possible.

"In contrast to Germany's old and well-established industry, many of these companies are relatively new to the market," says Christoph Dörrenbächer, a professor for international business organization at the Berlin School of Economics and Law.

"It took Siemens 150 years before they conquered the international market, whereas Amazon and Apple did it in 15 years. They are not about to allow the side issue of worker participation to diminish their competitive edge," says the researcher.

Most US companies approach this challenge according to a strict regimen: Just as some supply the entire world with an identical product, they also intend to apply the same personnel policy worldwide. "Personnel is still the most local function in a multinational company. This kindles the desire for standardization and diminishes their determination to intensively deal with national specifics, such as in the area of worker participation," says Dörrenbächer. "Some ride around like cowboys and promulgate an anything-goes attitude that the Germans have a hard time dealing with," he contends.

American companies operate some 1,400 German subsidiaries, and roughly 3,000 US companies have invested capital in Germany. Approximately 10 percent of all companies in Germany with foreign participation come from the US. The hamburger chains McDonald's and Burger King alone employ nearly 90,000 people in Germany. Amazon, with 9,000 employees, reported sales of €6.7 billion last year in Germany.

Fred Irwin sees a key problem in that "many new US companies that are active in Germany don't have a German personnel department." Irwin knows all about economic relations between Germany and the US. As the president of the American Chamber of Commerce in Germany and vice chairman of the German subsidiary of Citigroup, he has access to German politicians and numerous companies and CEOs on both sides of the Atlantic.

But the US companies Irwin deals with are primarily traditional ones like IBM and General Electric. "When it comes to new companies like Apple and Amazon," he admits, "I don't know a single German representative." That's hardly surprising. Apple Germany, for example, is managed from London. Hollister is run out of Amsterdam in the Netherlands.

'The Company Belongs to Us'

With its subsidiary Opel, General Motors is a prime example of how companies that have been active in Germany for decades still have trouble with the rules of the game according to Rhine capitalism. While everyone was scrambling to save the German car brand in the wake of the financial crisis, the Americans tried for months to play the various production plants against each other -- along with their influential works councils.

GM executives in Detroit were flabbergasted at how the head of the Opel works council, Klaus Franz, acted as if he were running the company and desperately fought to keep Opel from being drawn into the US parent company's financial turmoil.

"The Americans say: the company belongs to us," said Franz after he left Opel. "In the US, trade unions have a protective function. They are there to negotiate wages and working conditions," says Franz. "Here in Germany, though, they play a key role in the area of products and their quality, along with each company's growth potential, and thus employment," he explains. "We are highly professional members of the supervisory boards and we get involved. American (corporate) culture has a problem with that," argues Franz.

US company executives also view the German model with suspicion because the US economy is strongly oriented toward shareholder value. Budgets are often only made on a quarterly basis, and rarely for more than a year at a time. By contrast, German companies tend to pursue long-term plans.

"US managers don't see the advantages of worker participation according to the German model," says the head of the general works council at Harman Becker, Klaus Rupp, referring primarily to the aspect of social satisfaction.

Although it is based in Karlsbad, Germany, Harman Becker is a division of a US automotive supplier. Until recently, the US company still employed some 2,800 people in Germany. Five years ago, the heads of the company ordered strict cost-cutting measures and pushed them through with an iron hand, without consulting the works council. Nearly 1,000 jobs have already been shed. Employee representatives made alternative proposals, but the German managers were not receptive. After all, their job was to execute the orders from America. "We can demonstrate until we turn blue in the face," says Rupp.

It will probably be a similar story at Amazon.