The last few weeks had gone well for 55-year-old Peter Löscher -- perhaps a little too well. The CEO of electronics giant Siemens was no longer in the limelight, and for once there was no bad news to report. The tiresome discussion over whether the native Austrian might not be up for the job as head of Siemens, Germany's fourth-largest industrial company had also largely fallen silent.

That was the situation at the beginning of last week, at least. But then an old nuisance that the company had supposedly overcome caught up with him again, as did the question of what exactly is going wrong at the deeply traditional German high-tech company.

At that time, the public learned that the already overdue delivery of 16 ICE trains to German national rail provider Deutsche Bahn would be delayed even further, possibly until early 2015. The vehicles, at a price tag of more than €500 million ($653 million), were originally scheduled for delivery at the end of 2011. The delays have already triggered losses in the triple-digit millions for the company.

Perhaps even worse is the fact that the company will also be unable to complete a prestigious order for the construction of 10 high-speed trains for Channel Tunnel operator Eurostar on schedule. Ironically, the Germans spent years fighting a bitter battle to secure the contract.

Once again, Löscher and his managers became the targets of scorn and derision. The incident is reminiscent of "theater of the absurd," scoffed the Frankfurter Allgemeine Zeitung. The tabloid Bild came up with a new nickname for the multinational corporation's finished but not yet approved high-speed trains: "IC-Steh" ("IC-Standstill").

But managers at Siemens certainly have nothing to laugh about, because the company is also plagued by similar problems in other areas, such as power engineering.

Overly zealous salespeople in the division had already accepted four orders to build electrical substations for offshore wind farms in the North Sea, in addition to the corresponding cables. The giant steel structures transform the AC current generated at sea into DC current before it is then transformed again on land. But now the company has also run into delays of more than a year in the completion and start-up of some of the substations.

In seeking to explain the humiliating breakdowns, the company says that it underestimated the complexity of the orders. It also blames the delays on complicated requirements, approval procedures and overwhelmed suppliers. While this is true, it's only half of the story. In fact, the company's management structure and a lack of experienced, skilled personnel are responsible for most of the problems.

Until the second half of the 1990s, Siemens had, in addition to its career ladder for commercial employees, a system to promote the advancement of engineers. Ambitious newcomers with a talent for management could advance from low-level administrative jobs, through interim stages as group and department heads, to positions as division managers. Technicians and engineers, for their part, could maneuver themselves in a sort of parallel universe from positions as subject specialists to more senior tasks. The system was put in place so that, in addition to business aspects, technical issues would play an equally important role in key decisions and new developments.

The dual system extended all the way to upper management. The goal was to ensure that the executive board would include engineers, technicians and scientists, as well as lawyers and executives with business administration backgrounds.

The principle remains in place to this day, at least within senior management. Half of the 10 members of the Siemens executive board still have training in physics, mechanical engineering and electrical engineering.

But the dual structure was eliminated at the lower levels of the hierarchy. From then on, anyone with a scientific or technical background who hoped to advance within the company had to switch to the administration-oriented career ladder, and after that usually had only limited interaction with day-to-day problems in production.

Many Siemens employees passionate about technology lost interest and left the company on their own because they felt deprived of their career prospects. Other experienced specialists were forced out through cost-cutting measures such as early retirement or partial retirement programs over the years. As in many other large companies, they were replaced with younger budget analysts, management experts or marketing managers. This is now taking its toll.

In the case of the delays in delivering ICE trains to Deutsche Bahn, the relevant department noted early on that the company might encounter problems with the approval process for the trains, given their intended design, reports a Siemens insider. But these internal experts were apparently unable to impress the urgency of the problem on their more business-oriented superiors. A company spokesman denies such claims, also stressing that technical staff still enjoy good working conditions and advancement opportunities at Siemens.

It is clear that Siemens already has a shortage of older, experienced employees in many areas, people who, if push comes to shove, are capable of improvising and consulting with colleagues from other departments. And the problem is only likely to get worse, at least for now.

To increase profits, CEO Löscher wants to cut €6 billion ($7.9 billion) in costs by 2014. As a result, Siemens is currently undergoing a large-scale reorganization, complete with layoffs and transfers. More than 5,000 jobs will likely be cut in the industry division alone, including about 2,200 positions in sales and administration.

By 2014, the company is expected to eliminate almost 10,000 jobs in Germany, in some cases through agreements to terminate existing contracts or through partial or early retirement offers to older employees. But this will also spell the loss of additional know-how.

Members of the shop council and labor representatives have gone along with the bloodletting, albeit with great reluctance. But that is now changing. Löscher's executive board likely got its first taste of this new resistance on Tuesday, when the supervisory board, newly formed in January, held its first working meeting.

The agenda included a review of figures for the first quarter of 2013. The company could face new exceptional charges of up to €500 million, partly as a result of delays in the rail and wind divisions, as well as the establishment of reserves for the current cost-cutting program.

"The patience of Siemens employees is not infinite," he added. 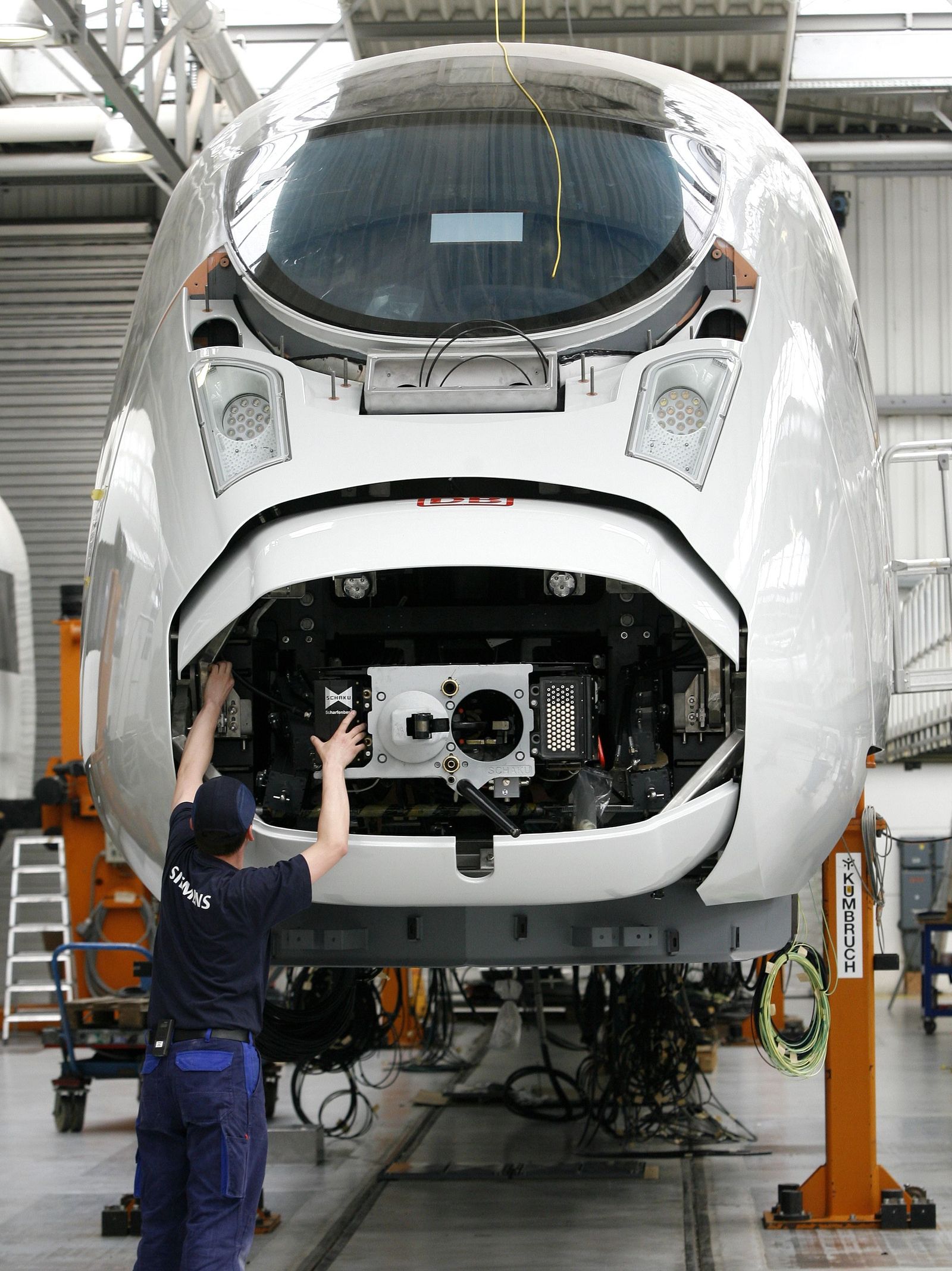 A Siemens worker in Krefeld assembles an ICE train this April.