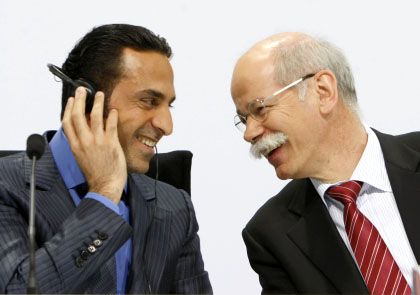 It was the kind of news the German stock market had evidently been waiting for -- after the emirate of Abu Dhabi said on Sunday evening it was taking a 9.1 percent stake in German auto maker Daimler, the stock leapt as much as six percent. By midday on Monday, the stock was still up around two percent. Analysts said the investment by the oil-rich sheikhs would stabilize the Stuttgart-based company which is suffering from the global slump in auto sales. Daimler, they said, had found a new strategic investor with a long-term focus.

While Daimler AG is world-famous, its new shareholder, Arab state fund Aabar, is little known in Germany. The company belongs to a complex web of state-owned and semi-state-owned investment vehicles set up by the sheikhs of Abu Dhabi to multiply their petro dollars.

Aabar is controlled by the state fund International Petroleum Investment Company (IPIC), which has an investment portfolio estimated at more than $14 billion. Daimler could use liquidity at this time of crisis in the global auto sector.

Daimler's sales of Mercedes luxury cars have dropped sharply and it hasn't been able to benefit much from the German government's €2,500 scrapping bonus -- a tax-free cash payment to all new car buyers who agree to scrap vehicles older than nine years of age -- which is helping to boost sales of mass producers such as Volkswagen. Last year Daimler's profit dropped by almost two-thirds to €1.4 billion, and Daimler CEO Dieter Zetsche has said the group will make an operating loss in the first quarter of 2009.

Little wonder then that Zetsche was pleased with the Abu Dhabi deal. "We are delighted to welcome Aabar as a new major shareholder that is supportive of our corporate strategy. We look forward to working together to pursue joint strategic initiatives," he said in a statement on Monday.

Aabar, which means "the fountain," is furnishing Daimler with €1.95 billion of fresh capital in exchange for its stake. "A possible increase in the stake must be reviewed at a later date. At the moment we're pleased with 9.1 percent," said Khadem Al Qubaisi, the chairman of Aabar. The fund wasn't aiming for a seat on the supervisory board "at the moment," he said, adding: "Perhaps at a later date."

Zetsche said there were three reasons for the cooperation with Aabar: The company was getting a new "key investor", improving its capital base and getting a strong, long-term partner who would help it weather difficult times in the auto industry.

Al Qubaisi said: "It's always good to buy in times of crisis." He said Aabar had a long-term interest in Daimler. Abu Dhabi is the second Arab shareholder in the venerable German automaker -- Kuwait has owned a stake in it since 1974, and that shareholding will slip to 6.9 percent from 7.6 percent as a result of a capital hike taking place under the new deal.

Stefan Bratzel, an auto industry analyst at the Economy College in Bergisch Gladbach, said Daimler had urgently needed a new investor. "Daimler lacks a strategic partner, unlike other premium manufacturers," he said. Audi was backed by its parent Volkswagen, while BMW had the Quandt family as a financially strong backer. "Daimler had until now lacked a strategic safety net," said Bratzel, adding that the Abu Dhabi deal was a "stroke of luck."

Aabar plans to get more involved than Kuwait in Daimler's business and wants a say in its corporate strategy, mainly in the development of electric cars and innovative compound materials. Concrete projects are currently being discussed. Zetsche said Daimler would support an academy for the auto economy in Abu Dhabi.

But Bratzel said it was doubtful whether a stake of less than 10 percent would suffice for a significant say in Daimler's management. Nevertheless, the acquisition sent out a good signal. "The new investors, like Kuwait, are interested in a long-term stake," he said.

The purchase had averted the danger of a hedge fund with short-term profit goals buying into Daimler, said Bratzel. That was a very real danger given that Daimler's current stock market valuation of just over €20 billion is relatively low, which made the company an attractive takeover target. After all, a majority stake would cost just slightly more than €10 billion, said Bratzel.

There's little prospect of Daimler's stock rising significantly anytime soon, said Marc-René Tonn, an analyst at Warburg-Bank in Hamburg. "If one assumes that the automakers of the future will return to the kind of profitability they had before the crisis, then Daimler is very cheaply valued," he said.

But he added that it was unlikely that the market would return to its old levels, especially in the company car business, which is Daimler's strength.

"In the current situation the new investor gives Daimler far more financial flexibility," said Tonn, adding that it was hard for automakers to get capital these days.

Aabar started out as an energy fund, and its staff still answer the phone saying "Aabar Petroleum." But the company has gradually shifted its focus to financial services. In early March, Aabar acquired around €50 million worth of bonds issued by European bank Unicredito.

MAN celebrated the purchase as a major success, but the new owners were no less pleased -- analysts say the $500 million price tag for the German engineering company was pretty low.

Al Qubaisi said Germany had no reason to fear that key technological knowhow would be seized as part of the deal. "We don't plan that at all. On the contrary: We need German technology to make us sustainable for the future," he said.