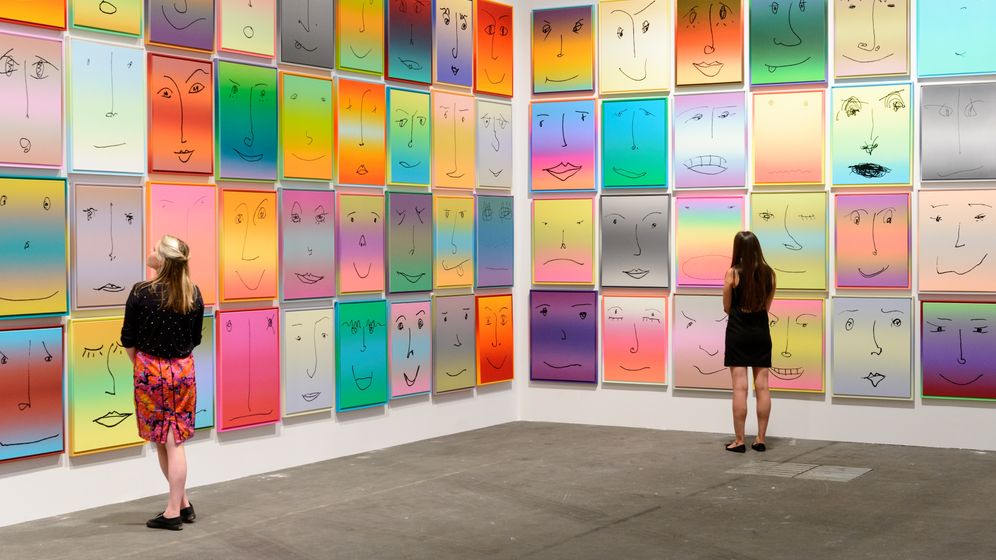 One of the world's most valuable art treasures is being stored in an extremely ugly place, a six-story concrete building known as the Geneva free port. Instead of windows, much of the façade of this giant safe for the world's wealthy is covered with gray panels.

Anyone hoping to get into the walk-in lock boxes of this very special Swiss tax haven must first surmount a number of hurdles. At the first door, an employee has to type the right combination of numbers into a small screen. The next hurdle is a large steel barrier that has to be rotated counter-clockwise until it snaps into place, followed by a heavy steel door that resembles a submarine bulkhead. Behind it is a drab corridor with doors on both sides. Only the renters have keys to these doors.

The employee of Geneva Free Ports & Warehouses Ltd. remains discreetly in the background while the owners of the locked-up treasures count their gold bars or examine their collection of paintings being stored in the warehouse.

The Nahmad dynasty of art dealers reportedly has 300 Picassos in storage in Geneva. Countless Degas, Monets and Rothkos are also stored on the inhospitable premises. The estimated value of the works is in the billions. Hardly any museum can boast such a valuable collection.

Those who use the warehouse are genuinely wealthy. According to the Capgemini World Wealth Report, there were 12 million millionaires in the world last year, with combined assets of $46.2 trillion (€35 trillion), or 10 percent more than in the previous year.

But even if the world's rich are getting richer, many of them are also worried. The financial crisis isn't over yet, and tax havens worldwide are under pressure to disclose the identities of people whose assets are parked in their banks.

Recently, even Swiss bankers have been sending letters to their clients, asking them to cooperate with tax authorities and consider turning themselves in. This only heightens fears of the tax authorities. "We assume that a total of hundreds of billions of francs will flow out of Switzerland," said the head of the asset management division of UBS, a major Swiss bank, in late 2012.

From Banks to Warehouses

But not everything the banks are losing is actually leaving Switzerland. Customers are admittedly emptying out their accounts and safe deposit boxes. But partly as a result of the many uncertainties in the financial markets, a growing share of the money is being invested in tangible assets, such as art, wine and classic cars. A total of $4 trillion has reportedly been invested in "treasure assets," a category including various kinds of precious objects.

This requires warehouse space that satisfies the most stringent security requirements. Swiss military bunkers blasted deep into Alpine rock are in great demand. But the free ports in Geneva and Zurich are even more popular because they offer what Swiss banks used to: the freedoms of a tax haven and maximum discretion.

"Scared customers are currently transferring their assets from the banks to the city's warehouses," says a pleasant woman at the Geneva free port. So far, she adds, only Swiss customs has shown an interest in the contents of the warehouses, while foreign tax authorities' chances of gaining access to lists of stored property are slim. Tax evasion, she notes, is not a crime in Switzerland.

For renters, the real challenge is getting adequate insurance coverage for the riches being stored in the warehouse, with its 140,000 square meters (1.5 million square feet) of storage space. "We have no additional insurance capacity for the warehouse. It's a huge problem for our customers," says Ulrich Guntram, chairman of Axa Art Insurance Corporation, the leading art insurer. Other Swiss insurance companies are also declining to offer coverage.

No one knows the exact value of the property being stored in the warehouses. A fire in Geneva is seen as the greatest potential loss scenario in the art world. Partly in response to pressure from insurers, an additional six-story building that will be reserved exclusively for art is now being built in the Geneva free port.

The warehouse company, of which the Canton of Geneva owns 86 percent, offers a special Swiss service: The country's customs agency, which has an office in the warehouse, doesn't charge import duties, export duties or even value-added tax. The valuable objects are brought to the warehouse directly from Geneva's airport. Later, they can be sold and sent abroad discreetly and without additional costs at any time.

In fact, the facility offers a solution for every problem. Classic car aficionados can rent special garages, while wine lovers are offered storage space with controlled temperature and humidity. Providers like Stockbridge, a British asset management company, advertise that gold is completely safe in Switzerland, even when a country can confiscate other types of assets held there. Switzerland is the world's largest importer of gold, bringing in even more than huge countries, such as India. Four of the world's major refineries for the precious metal are in Switzerland.

Partly as a result of its duty-free warehouses, Switzerland has developed into a commercial hub for anything that glitters and is expensive. This has not escaped the attention of big- or small-time criminals. On February 18, heavily armed thieves disguised as police officers held up an armored security truck parked in front of a Helvetic Airways plane at the Brussels airport. They carried off $50 million in diamonds en route from Antwerp, the Belgian gem center, to Zurich.

Insiders refer to the planes that travel between Belgium and Switzerland as "diamond bombers." The police have managed to arrest most of the Brussels airport thieves, and a portion -- albeit a tiny one -- of the loot was located in Geneva.

Massive amounts of money are involved. German citizens reportedly have up to €200 billion in undeclared earnings in Swiss bank accounts. "Withdraw the money in cash and put it into a private box," bankers advise their customers. In fact, Swiss National Bank, the country's central bank, can hardly keep up with the demand for new 1,000-franc bills, the most popular currency denomination among tax evaders.

But the truly wealthy prefer to invest in art.

Now that the Chinese have discovered the art market as a way to invest their money, the global art business has grown exponentially, reaching estimated sales of €43 billion in 2012. "In the top price segment, art functions as an investment. The rich want to protect their assets," American collector and author Ethan Wagner ("Collecting Art for Love, Money and More") said in an interview with the German weekly newspaper Die Zeit.

There is no better place to do this than in Switzerland, where, unlike in Germany, exported art is exempt from value-add tax. This is one of the reasons Art Basel has become a global hub for art and home to its most important fair.

Every year, in mid-June, up to 300 private jets touch down at the Basel-Mulhouse-Freiburg Airport for the first day of the fair, when galleries invite customers to their exclusive previews. This year, many of the billionaires interested in art, such as Russian business tycoon Roman Abramovich, had to make a detour to a nearby airport because French air traffic controllers were striking.

But even that didn't hurt business. The works of artists who have become global brands in their own right are especially successful at art fairs known for attracting large amounts of money. On the preview day, a mobile by Alexander Calder sold for $12 million. Each of the five copies of "Not Yet Titled (Kleine Marokkanerin)," the new sculpture by German artist Georg Baselitz, sold for just under €1 million.

New York gallerist David Zwirner asked $3.5 million for an early painting by Gerhard Richter -- and it sold immediately. "We are undoubtedly in a high-price period," Zwirner says, "and yet the market seems absolutely healthy and sound."

Sam Keller, director of Fondation Beyeler, a Basel museum, is also stunned by the development. "Artists now attract the same attention as rock stars used to get," says Keller, who headed Art Basel for a long time. But he also sees nothing wrong with the global elite's choosing to spend their money on art.

A Vehicle for Money Laundering

It is widely acknowledged that many of these artworks promptly disappear into art warehouses. Dealers are also quietly aware of how the international art trade can be used to launder money.

In April, the FBI searched the Helly Nahmad Gallery on Madison Avenue in New York. US authorities accuse Nahmad, one of the members of a family of collectors, of money laundering and other crimes, which he denies. The New York gallery had a prominent booth at Art Basel this year, as it does every year.

In 2008, the Swiss federal police office summed up its assessment of how well-suited the art industry is to money laundering: "On the whole, discretion and a lack of transparency prevail in the art trade, and transactions are often settled in cash." The issue is also frequently addressed in the Swiss National Council, the lower house of the country's parliament, but nothing has been done about it yet. Proposed legislation that would make the Swiss art market subject to the country's money laundering law has been repeatedly delayed.

UBS is the main sponsor of Art Basel. It has the largest lounge in the VIP area, where it invites its best customers to special exhibits. Art is big business in Basel. "The target audience falls within the highest segment of the wealthy," says Swiss attorney Karl Schweizer, who has developed the business for UBS. "You can make incredible customer ties with art."

Deutsche Bank, Germany's largest bank. has also entered the business of art warehouses. It already has its own large art collection and is the main sponsor of London's Frieze Art Fair, which also has a sister event in New York. Now the bank is building its own warehouse in London and, like UBS, has leased storage space for 200 metric tons of gold in Singapore.

Getting In on a New Business

The Christie's auction house maintains a presence at the Singapore Freeport, a sleek, futuristic building located at the airport. The Asian city-state has copied Switzerland's successful strategy with the help of a Swiss adviser. It also offers complete discretion and tax exemption.

The Luxembourgers are also vying for a spot in this lucrative business. An upscale high-security warehouse with an elegant stone façade is currently being built at Luxembourg's main airport. Instead of a six-story, uninspired structure like the one in Geneva, the warehouse in Luxembourg will make the world's wealthy feel comfortable by being an object of art itself. "It will be a fortress of art," David Arendt, the head of Luxembourg Freeport, promised at a presentation in June. It will be surrounded by three-meter (10-foot) walls, he added, and its guards will of course be armed.

The Luxembourgers have also amended their tax laws to accommodate their freeport, which is scheduled to open in September 2014. In the VIP area of Art Basel, officials from Luxembourg sought to entice a well-heeled clientele by touting the new facility -- in various languages, including Russian -- as "your tax-free emporium."

Indeed, this tiny country in the heart of the European Union has big plans. At a conference on the future of Luxembourg as a financial hub, Arendt said: "We no longer wish to focus on the Belgian dentist and the German butcher."