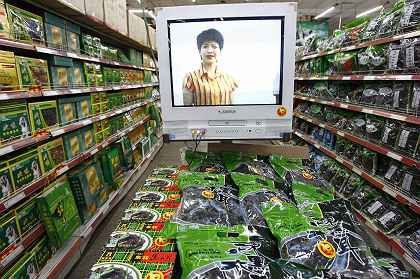 Video promotions in a brand-new supermarket in Shenyang, China. China's economy continues to expand at a rapid rate, with 11.5 percent growth in the third quarter of this year.

China's economy is continuing to surge ahead in double-digit growth figures and is due to overtake Germany as the third largest in the world within the next few weeks.

The country announced 11.5 percent growth for the third quarter of 2007, down on the 11.9 percent of the second quarter thanks to government efforts to cool the boom.

The country's National Bureau of Statistic announced Thursday that efforts to keep the expansion under control were succeeding. "Due to macro-economic controls, we have turned the economy from being an overheating one to being one of speedy growth," spokesman Li Xiaochao told a news conference in Beijing.

China's communist government is facing a delicate balancing act between maintaining high growth to ease poverty while avoiding runaway expansion which could provoke a financial crisis. Beijing increased interest rates five times this year alone and inflation was down to 6.2 percent in September, from a decade-high 6.5 percent in August.

Government spokesman Li said China did not expect the credit crisis in the United States to have an impact on economic growth but he added that rising oil prices and a possible global slowdown could hit the economy next year.

China is now on track to overtake Germany as the world's third largest economy. In 2006, the Chinese economy was already worth $2.7 trillion, just slightly behind Germany's $2.9 trillion. By late 2007 or early 2008 at the latest China will usurp Germany's place behind the United States and Japan.

And another German title is soon to be snatched away: that of global export leader. According to the German Chambers of Industry and Commerce (DIHK) China is expected to overtake Germany as the world's biggest exporter by 2008 at the latest.