For the first six months of this year, car sales in Germany had managed to steer around the industry crisis hitting other European markets. But now the Continent-wide slump appears to have begun moving north. On Tuesday, the Federal Motor Transport Authority (KBA) announced that new car registrations in Germany were down some 11 percent in September against the same month last year.

The steep drop marked the third consecutive month that new car sales have fallen in Germany, following 5 percent drops in both July and August. But the KBA was quick to note that, because this year September had two fewer work days than it did in 2011, the actual drop was closer to 2 percent. Nevertheless, the new data shows that the European-wide car crisis is no longer confined to the south.

The automotive industry in Germany remains much stronger than elsewhere in Europe, though. Luxury brands continue to do well, with both Porsche and Audi registering increased sales over the first nine months of the year. Overall, some 2.4 million cars were registered in Germany from January to September, a slight drop over the same period last year.

Many German brands have been able to rely on strong sales in both the United States and Asia. However, that is not the case for many European car companies, which focus almost exclusively on markets closer to home. The result so far this year has been a dramatic industry plunge that looks set to result in the worst annual car sales in Europe in 17 years.

"I've never seen it this bad," Sergio Marchionne, head of Italian carmaker Fiat, told the New York Times in a summer interview. Referring to the discounts that many manufacturers have been offering, he added: "It's a bloodbath of pricing and it's a bloodbath on the margins."

The numbers back up that assessment. On Monday, France indicated that car registrations there dropped by 18 percent in September against the same month a year ago. In Italy, the drop was 25.7 percent, whereas Spain saw registrations plummet by a whopping 37 percent. Overall, the European Union has seen a 7.1 percent drop in new registrations over the first eight months of the year, with final numbers for September still pending.

While both Mercedes and Porsche both recently announced that, after strong first halves for 2012, they were forced to revise downward projections for the year, most of the industry agony has been felt by mass producers such as Fiat, Renault, Ford and Peugeot. Indeed, the latter two carmakers are on track to lose €1 billion each in Europe this year. Renault expects to sell 7 to 8 percent fewer cars in Europe this year than last, having suffered a 36 percent sales plunge in France in September. And Fiat factories in Italy are operating at just 50 percent capacity, according to Marchionne.

Germany's Volkswagen is the only major European mass-market manufacturer to have thus far avoided significant problems from the downturn on the Continent. The company has benefited from both a German market that has been strong until now and its significant share in markets abroad such as China and Brazil. "Despite all of the headwinds, we are sticking to our ambitious goals for 2012," CEO Martin Winterkorn said last week at the Paris Motor Show. Still, Tuesday's numbers showed that VW's September sales in Germany had dropped by 20 percent relative to September 2011.

Most industry observers do not believe the situation in Europe will improve in the near future, with slow sales expected through the end of 2013. Indeed, many have reached a consensus that the European automobile market needs to undergo fundamental restructuring, focused primarily on eliminating the overcapacity that has dogged the industry in recent years.

Some carmakers are addressing the problem. Peugeot is closing a factory near Paris and cutting 8,000 jobs, Fiat is planning to slash 110 of 550 managerial jobs in Europe, according to a recent Bloomberg report, and Opel is widely expected to close down its plant in Bochum by 2016.

But rapidly cutting back on capacity has remained a significant problem in Europe, due in large part to laws that tend to favor employees, making it hard for companies to close factories. The situation now has automotive executives asking for help. Fiat's Marchionne has repeatedly called on the European Union to come up with a coordinated plan to cut auto manufacturing across Europe. Wolfgang Schneider of Ford Europe echoed the sentiment recently, telling the New York Times: "We have to deal with overcapacity; politicians need to understand this."

The crisis could engender more changes in Europe as well. Italian media is reporting on Tuesday that some 1.75 million bicycles were sold in the country in 2011. It was the first time ever that cycle sales exceeded that of automobiles. 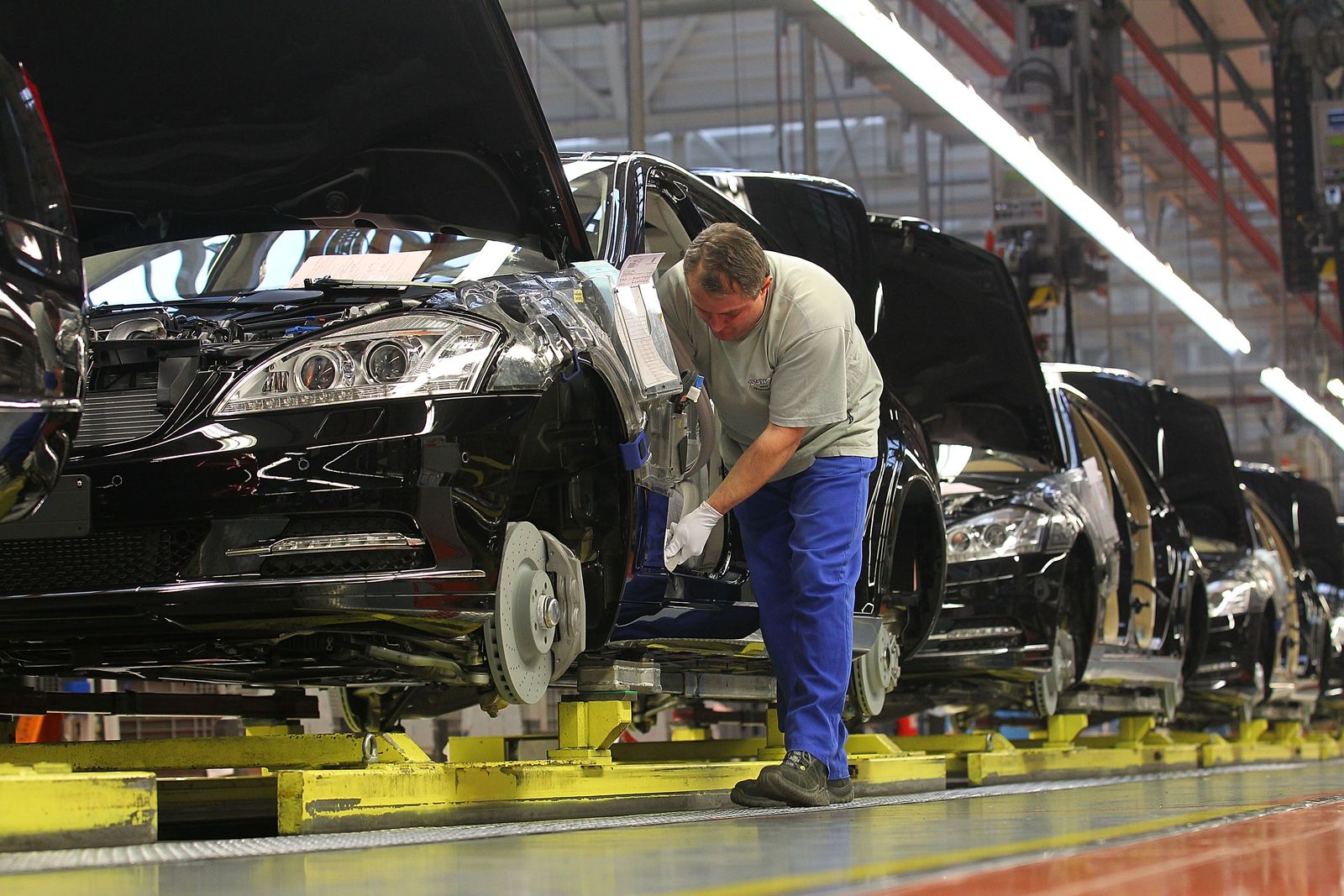 A worker at a Daimler factory in Germany. Auto sales in Germany dropped in September.