German carmaker Opel is seeking to become largely independent of its American parent company General Motors. In the future, GM Europe chief Carl-Peter Forster said on Friday after a board meeting at Opel's main plant near Frankfurt, Opel should operate far more independently than it has up until now. At the same time, he warned, Opel must remain part of the GM group of companies.

In recent weeks, Opel and GM Europe have been working together on a plan for the beleaguered German carmaker's future. According to the proposal put forward on Friday, the firm would operate as an "independent business unit," Forster said. 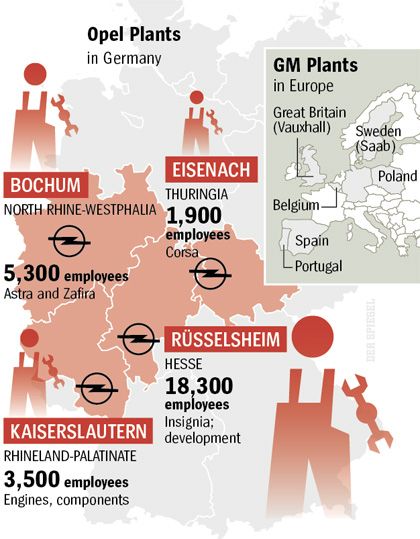 Graphic: GM in Germany and Europe

But as an independent European enterprise, the company still wants to remain under GM's corporate umbrella, he said. This would preserve access to new technologies and also enable Opel to profit from the company's sheer size. The enterprise, he said, would also be open to third-party investors. It would also help it get around prickly issues like the fact that the rights to Opel patents are held by GM.

Forster said Opel would present its plan to the German government on Monday. He cautioned, however, that the company would require "considerable financial means." He said Opel would need a €3.3 billion infusion -- money that could come not just from Berlin, but also the governments of all the countries and states where Opel and its British sister company Vauxhall are produced.

The GM Europe chief said negotiations were continuing over ways to prevent plant closures and layoffs, however, he pointed out that the company needed to take considerable cost-cutting measures of just short of €1 billion.

According to the plan put forward, GM itself would need to provide several billion euros to help rescue its European operations. It calls for GM Europe, of which Opel is the largest operating unit, to receive a cash infusion of €3 billion from the United States, the German news agency DPA reported. 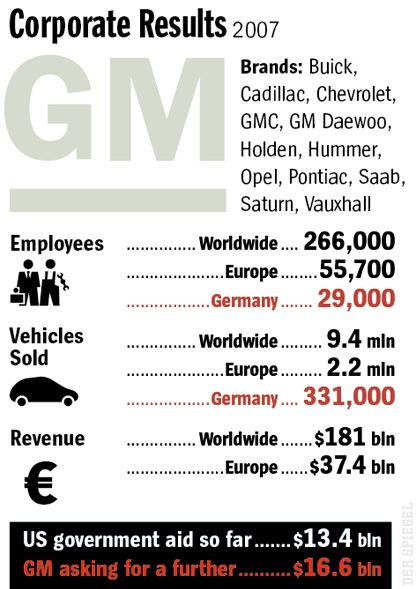 However, industry officials have expressed scepticism over whether GM in Detroit would be able to carry out that kind of investment. The company is currently receiving a bailout from the US government and is threatened with bankruptcy. It's also questionable whether Washington would permit any of the aid money given to GM to be passed on to its European subsidiaries. GM Europe is reportedly seeking credit guarantees and loans from the German government totalling around €3.3 billion.

Regardless of whether the plan is approved or not, workers at Opel are facing deep cuts. As part of the implementation of the rescue package, Forster said, the company's would have to eliminate its excess capacities. He said the company would seek to reach a deal with employee representatives. "We are currently negotiating the issue of ways we can avoid closing plants or laying people off," Forster said. He said it was likely that salaries might have to be cut and that the company might seek "voluntary redundancy packages."

In Hesse, where Opel's main plant is located in the city of Rüsselsheim, Governor Roland Koch of the conservative Christian Democrats said his state was considering providing financial aid to the company. He told a German public radio station it appeared investors might be shy about investing in Opel given the current risks. "We could assume this risk, we have the instruments to do that," he said. "We fundamentally have instruments available with which we can reduce the risk taken by investors."

Koch also said he wouldn't rule out the possibility of a direct investment in Opel. "Ownership by the state in a company is the absolute final means because it raises serious issues, and that's why we should always research other steps first."