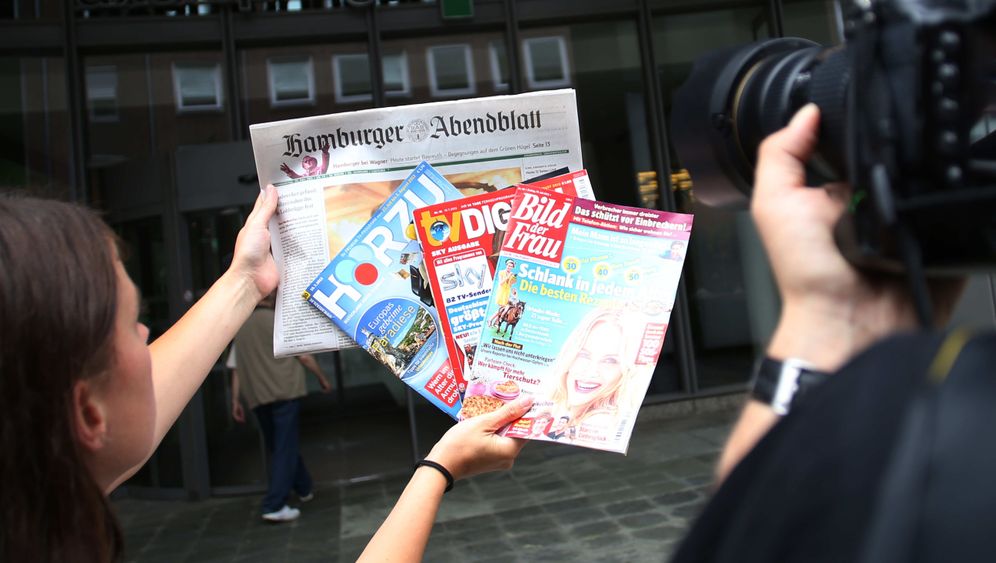 The Big Sell-Off: Springer Pulls Up Its Roots

On Thursday morning, the mood in the foyer of the Axel Springer building in Hamburg was one of disbelief. Staff were gathered in the same lobby where they celebrated their Christmas party just months ago. But this time, they hadn't come to celebrate.

This is not going to be easy, warned Andreas Wiele, a senior executive at Axel Springer, Europe's largest newspaper publisher, before breaking the news that the company will be selling a clutch of its regional newspapers and women's and television magazines to Funke Mediengruppe so that the company can focus on digital media. Bild der Frau, Hörzu and the Hamburger Abendblatt, a major regional daily with circulation of around 200,000, are among the publications included in the deal.

According to staff, Wiele made an effort to show concern for their situation, but many felt the company's decision displayed a complete disregard for its employees. Wiele was booed when he thanked employees for years of successful service, while the works council was applauded when it harangued the managers.

Even many on the executive floor were surprised to hear that Springer is cutting the rope on the print industry, say insiders. In fact, the switch in focus is in keeping with CEO Mathias Döpfner's new strategy. Not only has his revamp of the company, designed to boost returns and stock prices, been so far successful, it also amounts to an affadavit: the third-largest media company in Germany has apparently lost faith in the profitability of journalism.

Germany has witnessed the demise of a number of its traditional print newspapers in recent years, with the Financial Times Deutschland and the Frankfurter Rundschau filing for bankruptcy in 2012 alone, as well as the news agency dapd. Döpfner is keen to avoid Springer's print offerings from suffering a similar fate.

Although most of the publications it has sold to Funke are still profitable -- with the exception of the daily Berliner Morgenpost -- they are all facing dwindling readerships as the public turns to the Internet, as well as falling ad rates. Now, Springer is opting not to come up with ideas to tackle these structural changes but rather to sell off newspapers and magazines at a time when they can still fetch decent prices.

"We can only be pro-active when we're in good shape," Döpfner write in an internal email to his staff which has been seen by SPIEGEL ONLINE.

It's a plan that appears at least partly effective, with Funke paying €920 million ($1.2 billion) for its new assets, although Springer will actually be lending it some of that sum. Privately-held Funke will pay €660 million by June 30, 2014, at the latest, while Axel Springer will lend the remainder of the price to Funke for several years.

But Döpfner gets to top up the company coffers and concentrate on digital publications. "We will remain on track to becoming a leading digital media company," he wrote in his email. He was even more bullish at the company's last general meeting, when he enthused about "a virtual and dematerialized media world."

Döpfner's zeal is rooted in Springer's balance sheets. In 2007, newspapers and magazines accounted for 72.9 percent of turnover, the digital business just 8.1 percent. By 2012, that figure had shot up to 35.5 percent, while only 47.6 percent of turnover came from the print business. Selling off regional newspapers, women's and television magazines will see the print business shrink again. Last year, they earned Springer €512 million -- 15 percent of the company's turnover -- but as of 2014, digital publications will provide the lion's share of profits.

Of its publications, Springer is nevertheless retaining the newspapers Bild -- its flagship tabloid and the highest-circulation newspaper in Europe with a daily readership in excess of 12 million -- national broadsheet Die Welt and tabloid B.Z, which will be merged with Bild Berlin, while it is also holding on to its magazines in the Auto-Bild Group, the Computer-Bild Group, Sport-Bild and the music publications Metal Hammer, Musikexpress and Rolling Stone.

Journeying Away From Journalism

But Springer's strategy is more than a departure from print journalism: It also marks a move away from journalism, period. With the rapidly developing digital business, the companies proving most profitable include the careers platform Stepstone, the housing portals Immonet and Seloger and the price comparison portal Idealo.

In 2012, two-thirds of revenues -- some €787 million -- in Springer's digital business dervived from non-media products, while media products accounted for just €387 million. The company does not reveal how much of that was made by actual journalism, but insiders told SPIEGEL that profits from ads and paid content is "dropping steadily."

The future of journalism at Springer is not looking promising. Even the remaining print business is facing cuts. According to information obtained by SPIEGEL, up to €20 million is to be slashed at Bild, Bild am Sonntag and B.Z., with up to 200 jobs set to be eliminated.

But Döpfner pledged in his email to keep investing in journalism at Bild and the Welt Group -- although many have their doubts.

The Springer company is turning into a "service entertainment consortium in the style of Time Warner," says media expert Michael Haller. Martin Welker, also a media expert, meanwhile calls it "disappointing that Springer is not trying harder to reconcile the digital industry with journalism."

"Axel Springer would not have made this sort of strategic decisions," says Peter Jebsen from the company's works council.

He could prove right. According to Axel Springer's biographer Hans-Peter Schwarz, the entrepreneur, who died in 1985, apparently never stopped missing the company's early years as publisher of the Hamburger Abendblatt.

"(That period) was when I truly loved my job," he is quoted as saying in his biography. In Springer's opinion, the purpose of magazines and journalism was to shed light on mankind, thereby bringing about political change.

Now that Springer no longer owns Hamburger Abendblatt, the one-time newspaper man would surely be none too pleased by the direction his company is taking.

5 Bilder The Big Sell-Off: Springer Pulls Up Its Roots 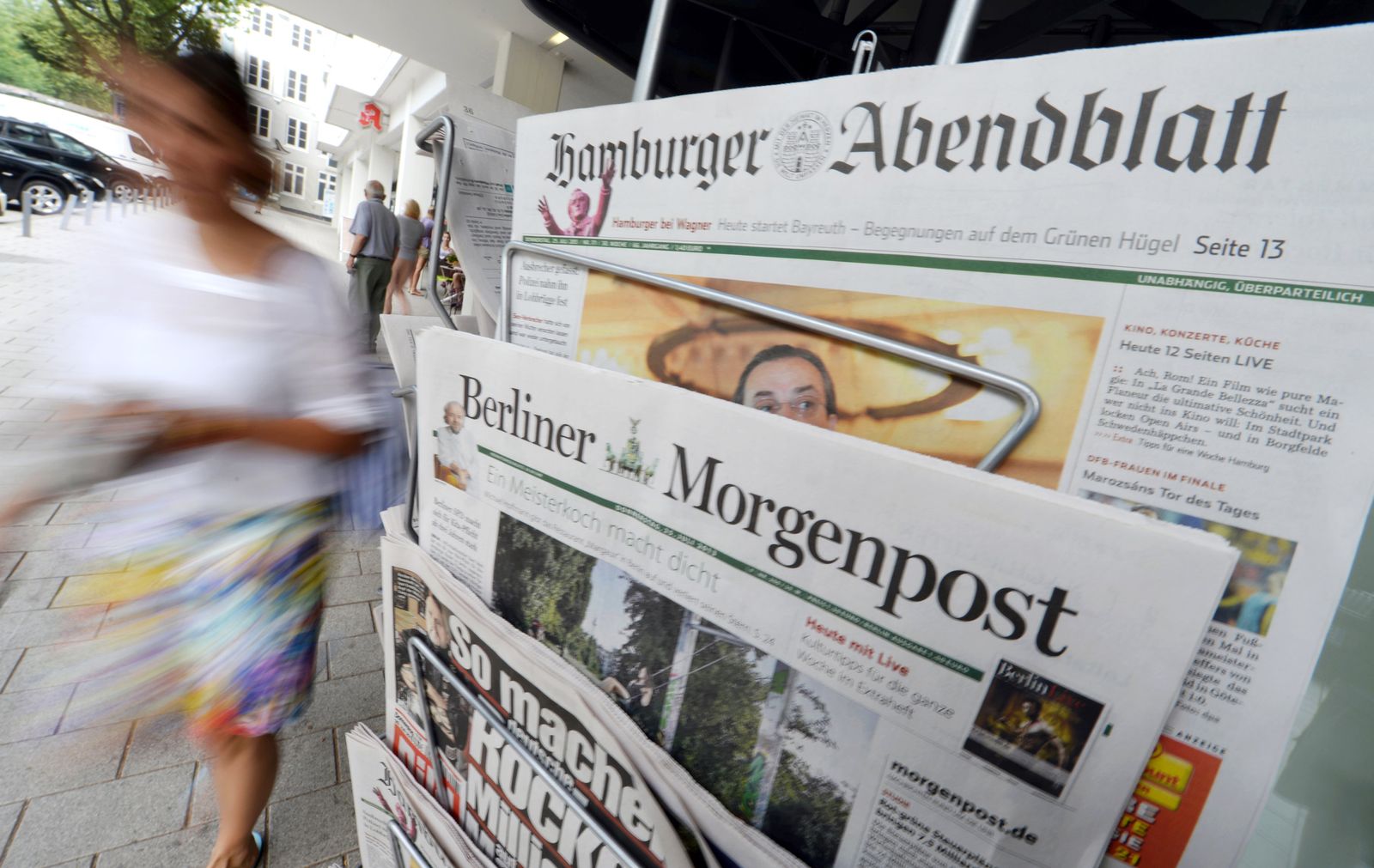 Funke Mediengruppe is buying the print package for 920 million ($1.2 billion) and Springer will actually be lending it some of that sum. Privately-held Funke will pay 660 million by June 30, 2014, at the latest, while Axel Springer will lend the remainder of the price to Funke for several years.