Jannis Papagrigorakis is a man of the world. On his business cards, he uses the English translation of his name: John. Foreign business partners should not be confused by unfamiliar words.

His office in the Athens diplomatic district of Kolonaki is one of dapper prosperity: marble slabs on the walls, a huge map of the Balkans -- an historic original -- behind the desk. Neatly-pruned orange trees grow outside.

The 56-year-old is the founder and chief executive of JEPA, an engineering firm that designs electronics for major projects. The list of projects he has worked on is impressive, ranging from the new Acropolis Museum to London's Heathrow Airport. But the list is no longer growing much. "Over the past two years our business has shrunk by 95 percent," says Papagrigorakis. "We are an office with 43 people -- and not a single phone is ringing!"

The culprit is easy to find. The Greek private sector, which accounted for 97 percent of JEPA's orders three years ago, has collapsed. Back then, the company had business from banks, hotels and restaurants. "The private sector was going well," says Papagrigorakis. But then the Greek state was plunged into financial disaster. And now the government, as so often in the past 30 years, is making a terrible mistake, Papagrigorakis says. "Instead of shrinking the public sector, it is raising taxes."

Greeks like Papagrigorakis find their own state as alien as many foreigners. While some state officials head home even before their lunch break, most private entrepreneurs work hard. At JEPA, 15-hour days are the norm, as is weekend work. Many state enterprises, however, simply have "no reason to exist," complains Papagrigorakis. He refers to the famous example of the office to oversee the reclamation of a lake which vanished way back in 1957.

In Greece, one in four employees works for the state. Industry makes up only about 12 percent of gross domestic product -- about half as much as in Germany. Small- and medium-sized enterprises make up the largest part of the Greek economy. And these medium-sized enterprises do have their strengths. Greek college graduates are well trained -- like the engineers working at JEPA.

"I have been pleasantly surprised by the high level of competence that I have encountered here," says Byron Vargas. He has been the technical director at the Greek subsidiary of Bosch and Siemens Household Appliances (BSH) for a year. The company has been operating in Greece since the late 1970s, manufacturing refrigerators and stoves at two factories.

But while Bosch and Siemens is a German brand with a good reputation, there is a lack of illustrious company names in Greece. There were once strong industries, like textiles. But they lost their competitive edge when Greece suddenly had to compete with Eastern European countries within the EU. There has been little new investment since, and even many Greek entrepreneurs are putting their money in Balkan countries.

Today, the Greek economy has an image problem -- even within its own borders. "Many Greeks don't believe that high production quality is possible here," says Vargas. Some Greek companies even disguise their origin, an industry representative in Athens says, citing a pharmaceutical company which markets its products through a foreign PR firm as an example.

The country's reputation is clearly not the only problem facing Greek companies. The collapse of domestic consumption means there are hardly any profits to be had at home. BSH too saw a decline in sales in Greece last year and was forced to lay off staff. But the German company can at least use production capacity in Greece to supply other European Union markets. Many Greek companies, though, are much too small to have such an international role.

The average Greek engineering firm only has five or six employees, said JEPA boss Papagrigorakis. That is too few to compete for large projects. "Nobody needs a Greek engineer to build a 200-square-meter house in Qatar."

JEPA, on the other hand, is involved in major projects in countries as diverse as Ukraine, Nigeria and Iraq. Papagrigorakis and his team have recently become part of a engineering co-op called Sibraxis. Altogether, some 250 engineers and designers offer their services jointly. The group is likely the first of its kind, says Papagrigorakis, and was born out of necessity. "The government always says that we should go abroad. But it doesn't help us do so," he says.

Companies also see the Greek government as being less then helpful when it comes to domestic investment. "The permit process must be improved. Otherwise the country is missing a golden opportunity," says Vargas. The BSH manager worked in Spain long ago. There too, the permit process was slow. "But there, one knew when the decision was made."

Only for Large Projects

The Greek state has become aware that it must do more to secure new investments. "Overcoming Obstacles" is the telling name of a conference being held by the government organization Invest in Greece on Friday. At the conference, a law passed in February aimed at facilitating investment in Greece will be presented.

But the new rules only apply to large projects, such as the privatization of the former Athens airport Ellinikon. At the beginning of the year, the Greek government appeared to have reached an agreement on the sale of the airport to investors from Qatar. Since then, however, negotiations have stalled. BSH manager Vargas believes that the government shouldn't solely focus on such mega-deals. "There also needs to be an accelerated permit process for mid-sized companies," he says. "The potential is huge."

For Papagrigorakis and his employees, new orders can hardly come soon enough. The company founder says that JEPA has only been able to avoid layoffs by cutting salaries. Furthermore, it has begun eating into company capital built up over the last 10 years.

Papagrigorakis hardly cares what move the government makes next. They should just go ahead and raise taxes, he says with a bitter laugh. "I don't really care about taxation," he says, "as long as we're not making any profits anyway." 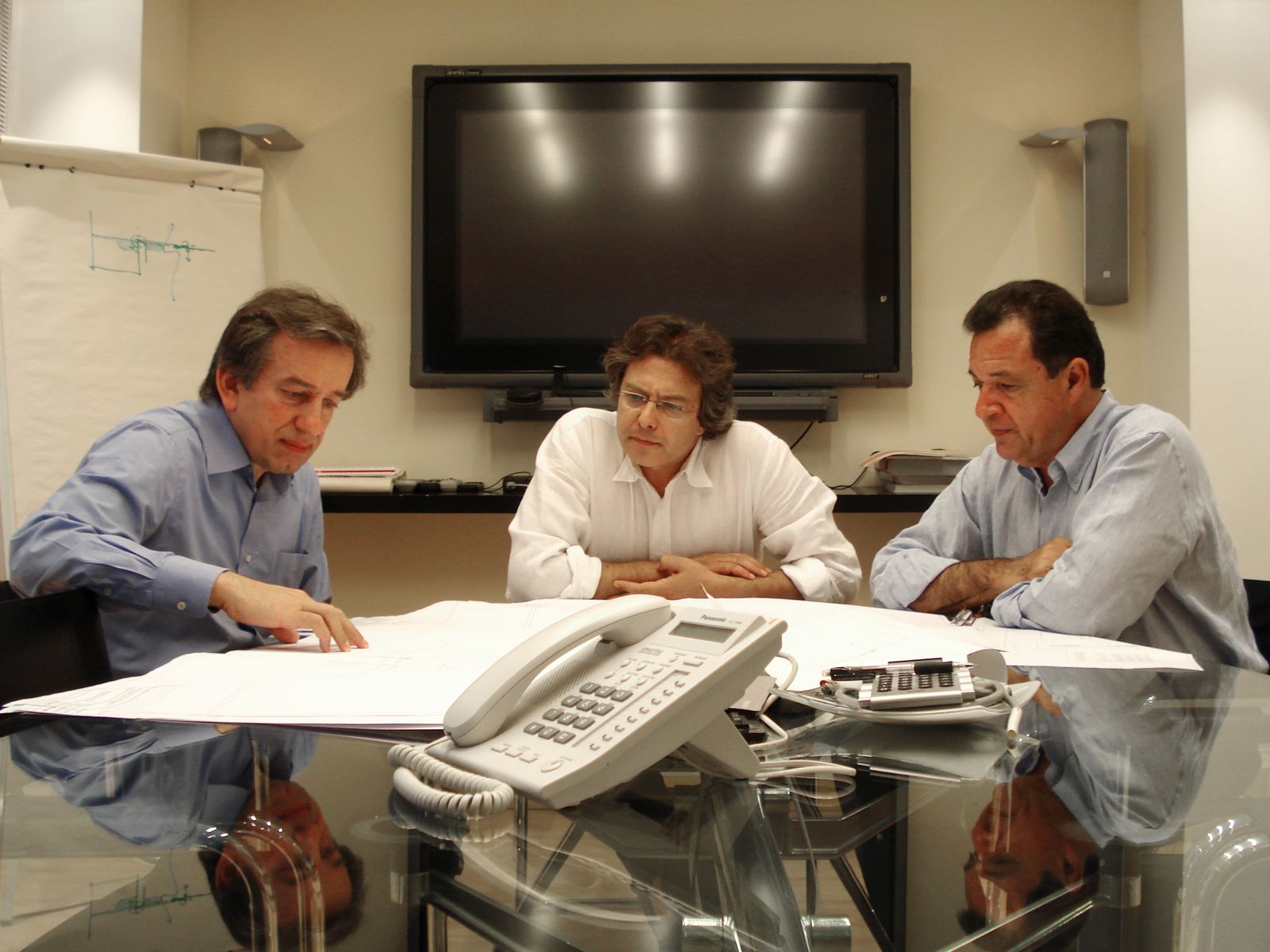 Company founder Jannis Papagrigorakis with two employees: "Not a single phone is ringing."