When it comes to European aerospace giant EADS, the balance of the company between its European partners is always a delicate one. Tail planes for Airbus jets are manufactured in Spain, wings are developed and produced in Britain and aircraft are assembled in Toulouse, France, and Hamburg, Germany. The situation is similar with the company's complicated shareholding -- the partners vie to preserve their state interests. But between no partners is this balance of power as touchy as it is between Germany and France, the two largest stakeholders.

So when Daimler announced a few weeks ago that it intended to shed half its remaining shares in the company, the news sent a collective shudder through the German government. Daimler began unloading EADS shares in 2006, dropping from a 30 percent holding at the time to 15 percent today. Almost five years later, Berlin still hasn't managed to come up with the long-term strategy for retaining influence in the company, which is often described as a European champion, an emblem of the advantages of pan-European cooperation.

Now, German Chancellor Angela Merkel's cabinet is reviewing scenarios under which it could convince automobile manufacturer Daimler to maintain its EADS shares. Although the German government has no direct ownership in Airbus, it does have considerable influence over Daimler when it comes to control of EADS.

A Subsidy for Electric Cars?

In talks last week between Daimler executives and German government representatives, sources familiar with the discussions told SPIEGEL that Merkel's cabinet had suggested Berlin might be prepared to offer a government incentive for purchasing electric cars if it remained a shareholder in EADS.

A few weeks ago, Daimler CEO Dieter Zetsche called on the government to introduce an incentive program in order to spur sales of electric cars being developed at great expense. Those subsidies, however, remain controversial within the government, with Economics Minister Rainer Brüderle of the business-friendly Free Democratic Party firmly opposed to such intervention in the free market.

And it appears the government's chances of convincing Daimler to rethink its decision to sell are slim. Daimler is determined, as announced, to reduce considerably its EADS holdings, although the company will maintain a 7.5 percent share and has also stated that it wants to continue to oversee the industrial aspects of the company as the main German partner.

"At EADS, one has to face the debate about the long-term shareholder structure that will hold the balance between France and Germany," Daimler Chief Financial Officer Bodo Uebber said at the company's annual press conference last week. "We are planning to maintain the industrial leadership on the German side."

This week, the German government is expected to discuss how Germany's influence in the company -- a difficult balancing act between French and German interests -- can be maintained if Daimler withdraws.

According to a report in the German business magazine Wirtschaftswoche published over the weekend, EADS officials are considering a legal option to solve the problem: the introduction of a so-called "golden share." EADS has sought to convince its major shareholders -- Daimler in Germany and industrial giant Lagardere in France, as well as the governments of both countries -- to agree to this system of special voting rights on strategic issues. "That is the only possible solution to the problem," the magazine quoted sources within the shareholding companies as stating. "We are currently working to resolve the existing legal obstacles." EU laws prohibit governments from holding golden shares, which provide crucial veto powers on major strategic decisions, in companies. The German government and Daimler refused comment to the paper on the issue.

On Monday, the Financial Times Deutschland newspaper also reported on another possible scenario -- at least for solving the immediate problem. EADS has enough money that it could simply purchase the 7.5 percent shares that Daimler is seeking to sell. Under the transaction, EADS would also have to purchase a holding of 7.5 percent coming partially from the French state and partially from Lagardere in order to maintain the balance of interests. The paper reported that a 15 percent share in the company would cost about €5 billion at current market rates. The share buyback could take place over time, the paper reported, and, combined with plans for a goldern share, has the potential to provide a longer term solution to the issue of power-sharing.

In addition to Daimler's 15 percent, a consortium of German private and government-owned banks also hold 7.5 percent of EADS shares, but Daimler has control of their voting rights. The consortium purchased the shares four years ago in order to give the government in Berlin time to find a permanent solution to the control issue, but they have only pledged to maintain that holding through 2012.

Chancellor Angela Merkel plans to discuss the new shareholder structure at EADS with Economics Minister Brüderle and Finance Minister Wolfgang Schäuble on Wednesday in order to seek a solution for maintaining the balance between Franco-German interests.

In France, the government preserves its influence in EADS through its own direct holding in the giant as well as through cooperation with media company Lagadere. Now both Daimler and Lagadere have expressed their intent to unload shares and a new solution must be found for this delicate balance of interests between Paris and Berlin in two countries that, while representing the economic motor of Europe, are often pitted against each other in direct political and industrial competition. 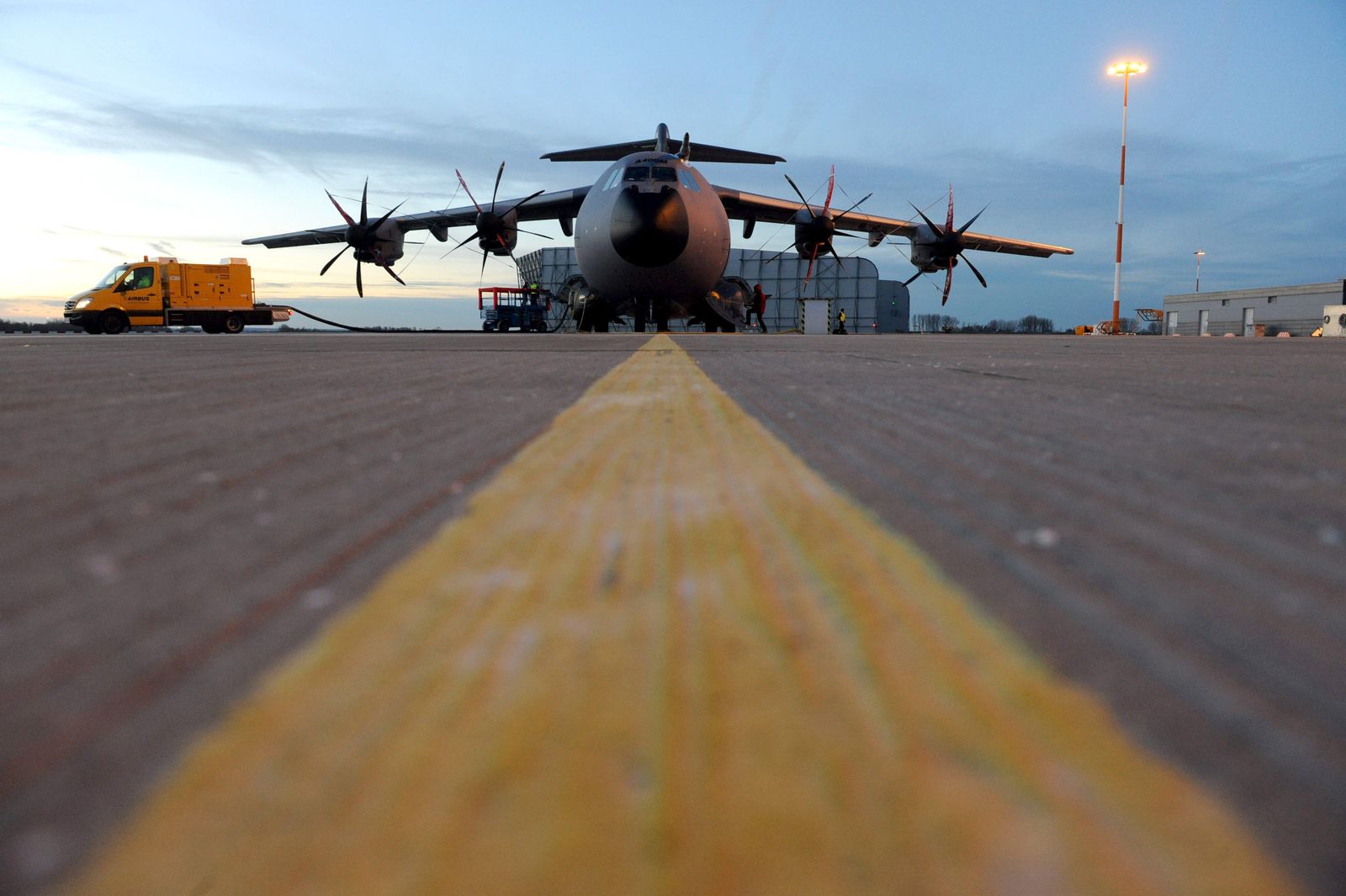 An Airbus A400M military transport plane in Hamburg -- Germany is trying to keep its influence in international aerospace group EADS.