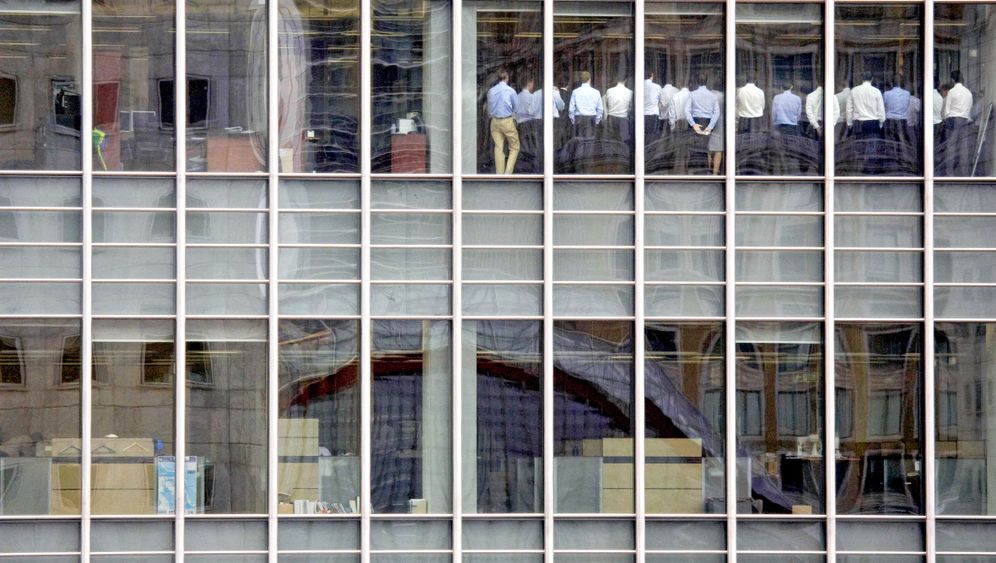 Andreas Dombret has to laugh out loud when he recalls the weekend preceding what some thought would be the end of the world as we know it. It was the weekend before Sept. 15, 2008, and Dombret was the head of Bank of America's German operations at the time. On Friday, Sept. 12, he learned from CEO Ken Lewis that the bank planned to negotiate the takeover of investment bank Lehman Brothers that weekend, and that all top executives were to make the necessary preparations.

Dombret spent that Saturday digging through Lehman files. On Sunday, he received another call from the United States, informing him that Bank of America was not going to acquire Lehman, after all, but another US investment bank, Merrill Lynch, instead. Dombret felt that Merrill was a better fit, but he also sensed that Lehman was about to drag his industry and the rest of the world to the brink of ruin on the very next day.

Lehman declared bankruptcy on Monday. On Tuesday, it was clear that the shock waves from the Lehman collapse were going to affect everyone, including Dombret's Bank of America and Merrill Lynch, which required billions in bailout funds from the US government. In Germany, Hypo Real Estate (HRE) and Commerzbank were also caught up in the turmoil, and throughout Europe entire governments sought to avert the impending meltdown of the financial system by nationalizing banks.

Dombret survived the dramatic events following the Lehman bankruptcy. Today, as a member of the executive board of the Bundesbank, Germany's central bank, he is in charge of financial stability, which makes him one of the country's most important opponents of excesses in the banking industry. When asked whether he believes that the industry and lawmakers learned the right lessons from that tumultuous weekend in September 2008, he concludes soberly: "We would hardly be more effectively protected against a chain reaction today than we were five years ago."

Dombret is critical of the system, saying that many rules and regulations need to be implemented more quickly and written into law. "Lawmakers seem to forget how deeply Lehman and the ensuing turmoil shook confidence in the market economy," he says. That was different a few years ago.

Between 2009 and 2011, the governments of the 20 leading industrialized and emerging economies (the G-20) agreed at several summit meetings that fundamental reforms were needed. They were determined that banks should never again be in a position to blackmail entire countries, because they were too big and too closely intertwined with the rest of the financial world to be allowed to fail. That was the consensus reached by world leaders, from German Chancellor Angela Merkel to US President Barack Obama.

The G-20 resolutions were followed by many attempts to tame what former German President Horst Köhler once called the "monster" of the financial markets. But the results remained tenuous.

While it is certainly true that bank bailouts no longer have to be ironed out in hectic, nighttime crisis meetings, it is also true that large banks, especially in the United States, are raking in billions once again. But the new sheen is deceptive, because banks owe much of their comeback to ongoing support from governments and central banks. Instead of having to launch bailout operations worth billions, they have simply turned to a policy of slowly feeding the financial industry with cheap money.

"In the euro zone, many banks would have trouble refinancing themselves without the help of the European Central Bank (ECB)," says Christoph Kaserer, a financial expert at the Technical University of Munich. According to Kaserer, a number of institutions are not sufficiently profitable to survive on their own in the long term. The euro-zone countries, fearing the potentially uncontrollable consequences of liquidating ailing financial groups, have helped create so-called zombie banks.

European banks are still burdened with massive bad loans left over from the financial crisis -- amounting to €136 billion ($180 billion) at Germany's Commerzbank alone. Analysts with the Royal Bank of Scotland estimate that the banks need to shed about €3.2 trillion in assets in the next three to five years, while at the same time generating €47 billion in fresh capital to be considered stable. If one of these shaky financial giants were to fall, it would likely spell the end of the banking sector's tentative recovery. "Although the domino effect of a large bank failure would occur more slowly than five years ago," says Munich economist Kaserer, "the consequences would still be so serious that a government would bail out an institution like Commerzbank again."

Losing Sight of the Objective

In the last five years, there have in fact been a significant number of new guidelines, laws, drafts and recommendations. The banks were forced to increase the size of their financial cushions, for example, but they still aren't large enough. Regulators devised split banking systems designed to shield customer deposits from risky trading activities, but the concepts are half-baked and have yet to be fully implemented.

The leading industrialized nations agree that banks should be liquidated in accordance with clear rules -- and without adversely affecting taxpayers, if at all possible. Nevertheless, there are still no uniform international principles to achieve this goal. Most countries don't even have an insolvency statute for the industry.

Bankers' bonuses were capped, but then their fixed salaries were increased dramatically. Regulators had vowed to rein in the rampant trade in derivatives among banks by requiring it to be conducted on supervised exchanges. Instead, the over-the-counter derivatives market has grown by 20 percent since 2009.

Over the years, lawmakers have lost sight of the most important objectives of regulation. Secure savings deposits, a continuous supply of credit and a functioning payment transaction system are as important to an economy as intact water pipes or power grids. The point is to ensure that this supply functions properly. At the same time, governments and taxpayers cannot allow themselves to be held hostage by the banks, merely because they can guarantee a basic supply of capital.

"What is needed is fundamental structural change, which, as in other industries, costs money. Lawmakers shy away from that," says Clemens Fuest, President of the Center for European Economic Research (ZEW).

Financial industry executives take every opportunity to warn that if regulators take aim at financial groups, then businesses, savers and investors will ultimately suffer. Take, for example, Anshu Jain. In the early summer, the co-CEO of Deutsche Bank gave a talk to students at Frankfurt's Goethe University. He always takes the same approach at such appearances. He touts the advantages of the universal bank, which, like his company, offers all financial services, from savings accounts to derivative trading. Then he admits that mistakes were made and highlights the need for reforms. At the same time, Jain sends out a warning to lawmakers not to overdo it with new legislation. "If all measures are implemented as planned, it could spell the end of 100 years of universal banking in Europe," Jain said in Frankfurt. His message seems to strike a chord.

Who Bears the Losses?

Capital rules are a case in point. "Contrary to their political rhetoric, Germany, France and even Japan have blocked the acceptance of tougher requirements in international negotiations," says financial expert Harald Hau of the University of Geneva. Their goal, he adds, is to avoid putting their own, undercapitalized banks under pressure.

At the time of the Lehman bankruptcy, many large banks maintained an equity cushion of only 2 percent of their total assets. The remaining 98 percent was borrowed capital. As a result, even small losses could lead to bankruptcy. Today, this cushion amounts to about 3 percent at many banks. "It's still far too little," says Hau, who believes that an equity cushion of 15 to 20 percent is ideal.

Regulators' notions are still well removed from such quotas. Meanwhile, they are fine-tuning complicated regulations that would require banks to maintain larger capital reserves for riskier transactions, and smaller reserves for those that are supposedly safer. This sounds reasonable, but the amount of risk associated with a deal often only becomes apparent in retrospect.

For instance, there are still no capital reserve requirements for many government bonds today, even though hardly anything threatens the existence of banks as much as the sovereign debt crisis. But who else would finance the excessive borrowing of governments?

Part of the job of banks is to assume a portion of the risks of companies, governments and citizens. Banks cannot fully safeguard themselves against financial risks and operate profitably at the same time. But that's why bankruptcies are also necessary, just as in any other industry. Regulation is needed to determine who, in addition to the owners, bears the risk of losses.

"So far, this central problem has been neglected in the reform plans," says Jan-Pieter Krahnen of Frankfurt's Goethe University. Krahnen argues that banks should be required to obtain a certain portion of their debt from non-banks. Insurance companies and pension funds, for example, would be better able to absorb losses, because they derive their revenues from customer funds committed for the longer term. But they argue that bank failures would then affect their customers, putting the pension plans of many people at risk.

In the end, citizens are always left bearing a portion of the risks associated with a good supply of banking services, be it through taxes or losses in their private pension plans. But these risks should be transparent and no larger than necessary. High-risk transactions, such as trading in securities, are not among the risks that broad segments of society should bear. For this reason banks are to be organized in the future so that their consumer services -- deposits, loans and payment transactions -- are largely separated from trading activities and can be spun off at any time.

However, Munich banking expert Kaserer questions whether the solutions devised in Europe and the United States to date will work. "The German banking separation law does nothing to stabilize the system," he says, "because the parent company is ultimately liable for all parts of the bank." It is unclear whether lawmakers will be able to create an effective separated banking system.

However, the banks' escalating trading activities could certainly be made more secure. "The more the trade in derivatives shifts to transparent and regulated exchanges, the more manageable the risks become," says University of Geneva financial expert Hau. But there is still considerable resistance to new rules. "The lack of market transparency is intentional on the part of the major banks, because that's the basis of their information advantage and the profitability of their trading activities," says Hau.

The bigger and less transparent the banks, the more reliable their guarantee that the government will bail them out if necessary. "The banks know that if they're complex enough, they'll be bailed out," says ZEW President Fuest.