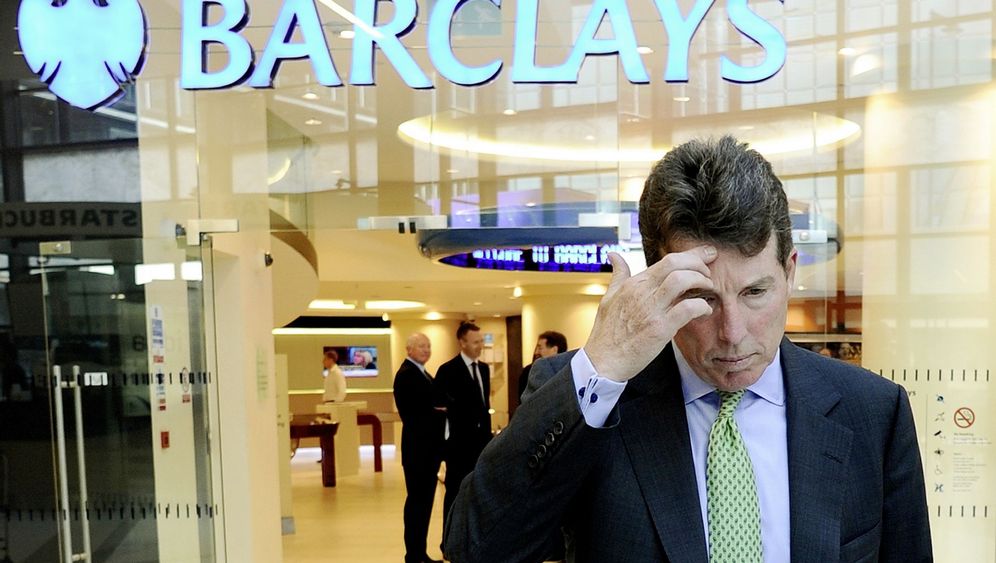 Bob Diamond seemed nervous when he sat in front of the members of the Treasury Committee of the British House of Commons last week. He had been forced to resign as CEO of Barclays, a major bank, the day before. Suddenly Diamond, once such an important figure, seemed very small indeed.

He poured himself a glass of water, cleared his throat and wiped his mouth with a handkerchief. The banker seemed like a stubborn child as he described his view of the scandal over the manipulation of interest rates that had just cost him his job.

Yes, Barclays employees had behaved reprehensively when they manipulated interest rates for years, Diamond said. But he also insisted that he had known nothing about it, and pointed out that other banks had also fudged their financial records. "I love Barclays. History will judge Barclays as an incredible institution because of its people."

Historians are probably more likely to remember Diamond's appearance and the scandal as a milestone in the demise of investment banks.

Barclays was ordered to pay a fine of $500 million (€407 million), because bank employees allegedly manipulated the London Interbank Offered Rate (LIBOR) for years. The rate is determined by a group of international banks, which provide the British Bankers' Association (BBA) with the rates at which they can borrow money from other lenders in the short term on a daily basis.

The rate appears on the screens of securities traders, fund managers and directors of savings banks around the globe. LIBOR is the basis for more than $350 trillion in securities transactions and loans. The scandal meant that one of the most important levers of the global economy had fallen into the hands of irresponsible bankers. Once again, it was a story of greed and inflated egos.

In addition to Barclays, about 20 other banks are suspected of having entered incorrect figures into the LIBOR system between 2005 and 2011. In doing so, they may have inflicted losses worth billions on investors, borrowers and other customers, further destroying confidence in their industry.

Financial companies will now have to get used to stricter regulation. The British government wants to largely separate risky investment banking from the rest of the banking sector, and there are similar plans afoot in the United States. Scandals and shrinking profits have made things difficult for financial industry executives. "You can't invest in the shares of investment banks at the moment, because there's constantly so much junk coming to light," says one of the leading analysts for bank stocks.

Even before regulators announced the first penalty in the LIBOR scandal, investment banks were constantly in the headlines for all the wrong reasons. Just recently, it was revealed that the major US bank JPMorgan Chase had lost at least $2 billion as a result of risky speculative deals.

In Germany, the public was astonished by the chutzpah of Morgan Stanley banker Dirk Notheis. A member of the center-right Christian Democratic Union (CDU), Notheis and his friend Stefan Mappus, the former governor of the southwestern state of Baden-Württemberg, had quietly, and without informing lawmakers, orchestrated the purchase of a stake in the energy group EnBW for €4.7 billion.

And in London, Frankfurt and New York, even major British and American shareholders rebelled against the large bonuses being paid to some bank CEOs. For these reasons, the LIBOR scandal in London, the mecca of high finance, has now triggered a storm of outrage. Mervyn King, head of the Bank of England, abandoned his usual restraint to attack the corrupt "culture in the banking industry and (…) the structure of the banking industry, from excessive levels of compensation, shoddy treatment of customers, to deceitful manipulation of one of the most important interest rates."

According to financial industry sources, not only Barclays, but also the Royal Bank of Scotland (RBS), the Swiss bank UBS and Citigroup are suspected of having systematically contributed incorrect interest rates for the LIBOR calculations, in part with the knowledge of senior executives. The institutions have yet not commented on these accusations. UBS had triggered the investigations with voluntary declarations.

In the case of the other banks, the investigators apparently assume that the interest-rate manipulations were the work of individuals. Emails that securities traders exchanged with bank employees who reported the interest rates for the LIBOR calculation to the BBA illustrate how they did it.

"The big day (has) arrived," one derivatives trader wrote in an email to the Barclay LIBOR submitter in March 2006. He needed a fixed three-month rate, and pointed out that "as always, any help (would) be greatly appreciated." The LIBOR submitter responded that he would report a rate that was lower by one basis point. "When I retire and write a book about this business, your name will be written in golden letters," the grateful trader wrote back.

WestLB and Deutsche Bank are among the banks investigators are targeting. In its most recent quarterly report, Germany's largest financial group states that it is being investigated by several regulatory agencies. The report notes that Deutsche Bank is cooperating with regulators, but that it has no further comment.

"If offences similar to those that apparently occurred at Barclays are uncovered at Deutsche Bank during the course of the investigations, everything will have to be investigated," says Hans-Christoph Hirt of the British shareholder advisory service Hermes. "It would be an opportunity for the new Supervisory Board Chairman Paul Achleitner to prove that he takes seriously the concerns that shareholders have clearly articulated."

The matter could also prove to be uncomfortable for the bank's new co-CEOs Anshu Jain and Jürgen Fitschen. For months now, outside auditors have, at the bank's request, been examining whether its traders were involved in manipulations. Two employees have already been suspended. If the suspicions against Deutsche Bank are confirmed, it could become the most expensive legal legacy from the days of the financial crisis, says one insider. This isn't just because of the investigators, but also because of people like the Frankfurt banker Friedrich von Metzler. Metzler's holding company includes an investment company that has filed an action for damages against Deutsche Bank and other banks in a New York court. Many investment companies are likely to join the suit, because they, as the trustees of their investors, must file claims if there is a justifiable suspicion that they were harmed.

The plaintiffs claim that the LIBOR banks had an incentive to push down the interest rate, especially during the 2007 and 2008 financial crisis. Investors were questioning the stability of banks at the time. It was in the financial institutions' interests to claim that their borrowing costs were as low as possible. Deutsche Bank, however, has always insisted that it never had any refinancing problems.

Last week, it became apparent how explosive the cited reason for the manipulation is. After resigning, Diamond hinted that the Bank of England might have encouraged Barclays to feed lower rates into the LIBOR system. Paul Tucker, the current deputy governor of the Bank of England, allegedly told Diamond in the fall of 2008 that "it did not always need to be the case that we appeared as high (with LIBOR submissions) as we have recently," according to Diamond's notes of the telephone call.

In the hearing before the House of Commons, however, Diamond stressed that he had not understood Tucker's statement as a call to manipulate LIBOR. On Monday, Tucker gave his side of the story, telling the Treasury Committee that he did not tell Barclays to lower its LIBOR submissions in 2008 and that no cabinet minister had asked him to put pressure on Barclays to do so. He said that Diamond's account of the telephone conversation gave "the wrong impression," saying that he regretted not having made a note of the call himself.

But it is noticeable that, up until the now notorious telephone conversation with Tucker in October 2008, Barclays routinely submitted the highest interest rates of the LIBOR banks, whereas its rates were on par with the others afterwards. In the committee, Diamond had expressed surprise that banks like WestLB, which already had problems at the time, were showing lower interest rates than Barclays.

Officials at WestLB declined to comment on Diamond's insinuations. A spokeswoman merely said that the bank is cooperating with regulators.

It could also become costly for WestLB, Deutsche Bank and other lenders if they are proven to have engaged in manipulation. If LIBOR rates were indeed shifted by up to 25 basis points and this actually affected transactions worth $350 trillion, the resulting claims will be staggering. "This could even ruin major banks," says Christoph Kaserer, a capital markets expert at the Technical University of Munich. However, it will be difficult to demonstrate the actual losses for individual plaintiffs.

Deutsche Bank is also coming under pressure from Germany's Federal Financial Supervisory Authority (BaFin). It is examining whether German banks have adequate control mechanisms to prevent or quickly discover interest-rate manipulations. To this end, BaFin has requested a special audit at Deutsche Bank.

Regulators may soon take steps to reduce banks influence on the LIBOR rate. "The existing procedure makes it far too easy for the participating banks to manipulate the reference interest rate, because it is based entirely on self-monitoring," says Andreas Dombret, the member of the Bundesbank's executive board responsible for financial stability. "In this sense, it is susceptible to fraud." According to Dombret, a new method is needed to determine reference rates like LIBOR. But the debate will extend beyond the lending rate.

"In light of the LIBOR case, a fundamental discussion about regulating banks needs to be conducted once again," says Hans-Christopher Hirt of shareholder advisory service Hermes. In fact, investors are already asking themselves whether it is right to have an investment banker at the head of a universal bank, as is the case with Jain at Deutsche Bank.

New rules are already making life difficult for the investment banks. They are now required to provide significantly more collateral for riskier deals, which reduces the rate of return.

While former Deutsche Bank CEO Josef Ackermann boasted of returns on equity of 25 percent and more, his successors recently had to make do with about 10 percent.

A majority of analysts expect that when the investment banks publish their quarterly results starting this week, the profits of most will shrink considerably.

End of an Era

Within the companies, there is an ongoing debate about what a strategy that goes beyond the usual cost reductions could look like. Shareholders are also no longer willing to accept dubious financial wizardry.

"The deals made by investment banks are justifiable, as long as they benefit the real economy," says shareholder representative Hirt. Jain and Fitschen plan to explain their interpretation of this guideline in September.

Investment banks pride themselves for being particularly flexible organizations. Recently, however, this flexibility seems to have consisted of manipulating interest rates when things became difficult.

But such trickery will not allow the financial industry to overcome its current crisis of confidence. The era of the Bob Diamonds of this world is finally coming to an end.