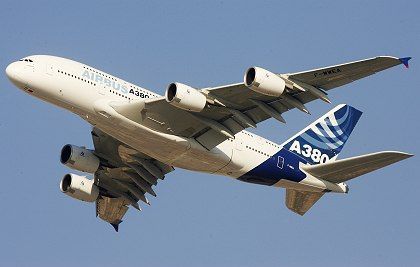 European planemaker Airbus announced Wednesday that it had failed to catch up with US rival Boeing in netting new orders in 2007 but that it had delivered more aircraft during the past 12 months.

Speaking to journalists at the Airbus headquarters in Toulouse, France, CEO Thomas Enders said that the company had secured 1,341 orders last year but was outdone Boeing, which received a total of 1,423 aircraft orders.

But Enders emphasized that, with 3,421 orders on the books, things were looking busy for the next six years or so. "These are enormous numbers," he said. "It was a staggering year. Now it becomes a question of how we manage the backlog."

Enders said that 2007 had been a "challenging but successful year," adding that the company had delivered 453 aircraft, beating Boeing's 441. He predicted on Wednesday that more than 470 aircraft would roll off Airbus production lines in 2008.

The delivery race will be a close contest in 2008, particularly amid reports that Boeing is to announce further delays to its 787 Dreamliner later Wednesday. The Wall Street Journal reported Tuesday that the company was likely to push back flight testing from March to June.

Airbus has had its own string of difficulties in recent years with a whopping 117 orders cancelled in 2007. Many customers were put off by the series of delays in delivering its A380 superjumbo, which finally began commercial flights with Singapore Airlines in October. It also had to come up with new plans for its mid-size Airbus A350 after customers demanded a redesign.

The losses Airbus incurred forced parent company EADS to introduce a program of tough cost-cutting measures, dubbed Power8, which aims to save €2 billion and cut 10,000 jobs by 2010. On Wednesday Enders said that Airbus had exceeded its targets in the first of four years of planned restructuring, with savings of more than €300 million ($445 million).

One of the problems plaguing Airbus that it produces in euros but sells in the increasingly weak dollar. Enders told reporters on Wednesday that the company had to find extra savings somewhere and was now planning to "internationalize" by shifting some of its production abroad to the dollar zone.

Airbus parent company EADS is currently locked in a battle with Boeing for building aerial refuelling tankers for the US Air Force. On Monday, Enders said that it would produce the tankers in the United States instead of Europe if EADS won the contract, which could be worth up to €135 billion ($200 billion).