Plagued with major delays and cost overruns, Germans are taking a very critical look at expensive public works projects around the country. The biggest debacle so far is the Berlin-Brandenburg International Airport, which will now only open several years after its originally planned 2011 launch date. But many are also looking sternly at a massive train station project in southern Germany, called Stuttgart 21, where costs have risen massively in recent weeks.

The German railway plans to build a new station underground to replace the outdated main station in the Baden-Württemberg state capital, but has faced massive public resistance against the project over the past two years. Critics argue it will be overly expensive, be of limited utility and damage the environment.

In addition to placing the station and tracks that currently divide the city underground, enabling the creation of entirely new districts in the city, Stuttgart 21 is also to include a new high-speed rail line to Ulm to speed up the Paris-Munich connection. Courts have ruled against protesters in the area and allowed the project to go ahead, but an old problem has reared its head again in Stuttgart: exorbitant costs.

DB executives conceded in December that the new price tag is likely to be €6.8 billion ($9.14 billion), more than €2 billion over Stuttgart 21's current supposed cost ceiling. The railway is owned by the German government, which, under pressure as a result of other expensive public infrastructure projects, is now distancing itself from Stuttgart 21.

The project was approved by a November 2011 referendum in the state, but it remains a deeply contentious issue. Pollsters believe the regional government's refusal to respond to the demonstrators' demands contributed to the defeat of Chancellor Angela Merkel's Christian Democrats by the Greens and Social Democrats in a state election in 2011.

In a letter to DB executives sent in late December that has been obtained by SPIEGEL, the three representatives of the German government on DB's supervisory board sent a letter demanding an explanation for the latest cost explosions and what should be done about them. "Since when has it been clear to the management board that there will be significant cost increases?" the letter asks.

The senior officials, with the transportation, finance and economics ministries, are critical of "planning and management errors" at DB on the project, particularly "overly optimistic assumptions." In addition, the officials do not rule out the possibility that the project may not be completed. They ask how high the costs will be "in the event of a continuation" and pose the question: "Is the total financing secured?"

They are also calling for new thinking on the part of DB executives. "Has DB explored alternative scenarios? If so, which? And what conclusions were drawn?" the letter, which includes a list of questions, asks. The government officials also refuse to blindly accept statements from DB managers that an exit from the project could be more expensive than continuing to build it. "Have assumed exit costs been externally reviewed?" the paper asked.

The letter was written shortly before Christmas after DB's management board conceded new costs in mid-December. The company is expected to provide answers this week.

Shortly after the announcement of the lofty new price tag in mid-December, German Transport Minister Peter Ramsauer said there was "no turning back" on the project despite the immense cost increases. Now it appears DB is looking for ways to rescue the prestige project.

A Trend in Underestimating Costs

The developments come at a time when Germany is in the midst of a vocal debate over public infrastructure projects. Too often in the past, officials have calculated lower figures for projects, only to concede overruns once it was too late to halt construction. It's a tactic whose days now appear to be numbered.

Michael Odenwald, a senior official in the Transportation Ministry as well as his colleagues from the Finance and Economics ministries, have said they will not accept responsibility for billions of euros in potential liability as members of the supervisory board. They are seeking to avoid a repeat of the Berlin airport fiasco in Stuttgart. In Baden-Württemberg, Governor Wilfried Kretschmann of the Green Party has stated that his government will not be willing to pay for any more than the €930 million it has already committed to Stuttgart 21.

At a Dec. 12 meeting, the supervisory board refused to approve a new financing plan for the project.

In the days leading up to the supervisory board letter, DB executives sought to explain to the members of the board why construction, despite the new cost estimate of €6.8 billion, still wouldn't be a money loser. A company spokesman said the project still "remained positive from a business perspective."

But three years ago, members of DB's management viewed the situation differently. They said the project would still break even at a maximum expense of €4.769 billion. 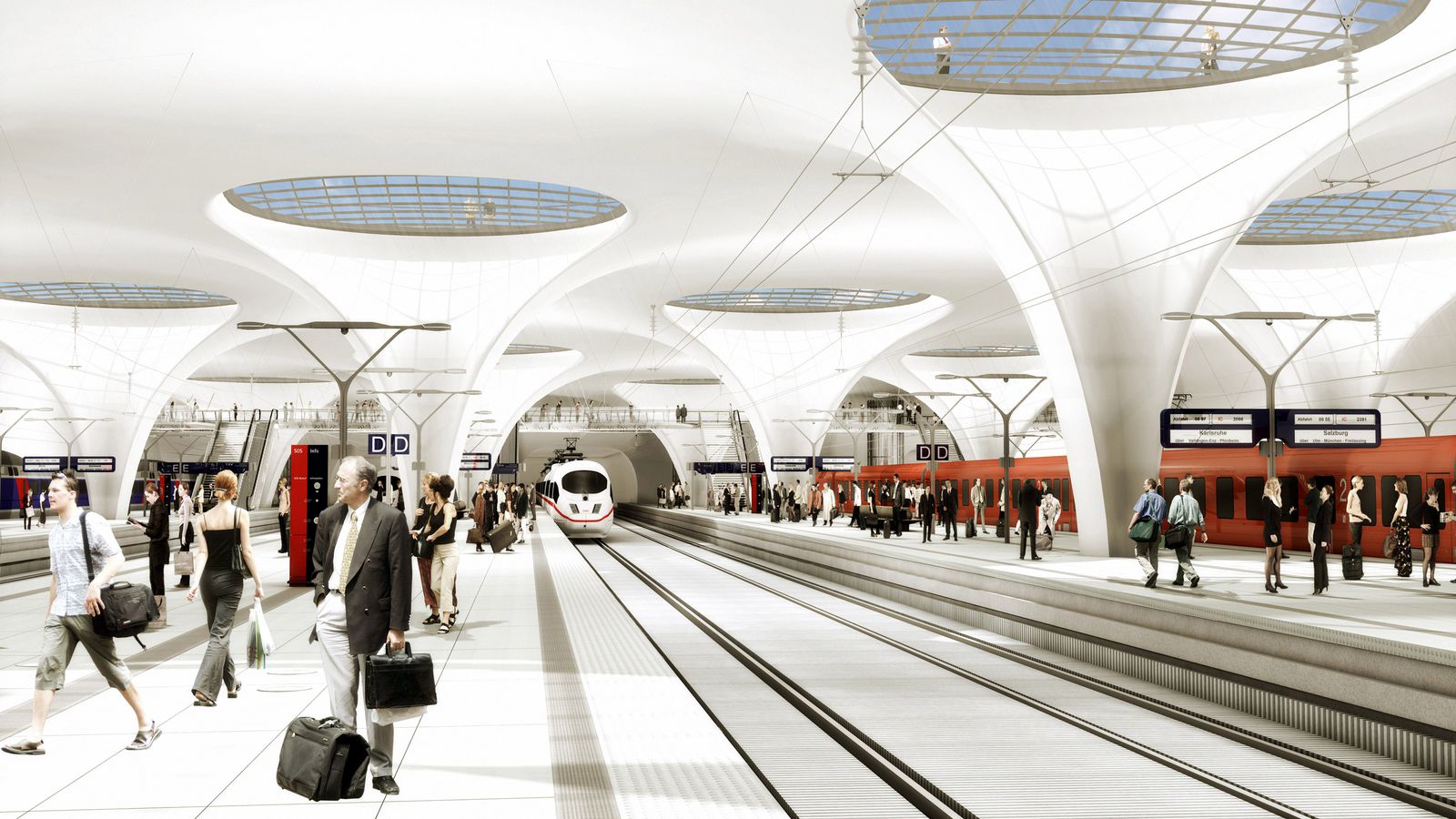 A computer animation of the completed Stuttgart 21 train station: Over 2 billion in new cost overruns.