Luis Ribeiro doesn't know Angela Merkel personally, but he counted on a promise she made. It may turn out to have been a mistake.

"We cannot allow a generation to be lost," Merkel said last July during a crisis summit with the leaders of numerous European Union member states held in Berlin to address the problem of rampant unemployment among young adults in large parts of Europe. At the time, the German chancellor and other EU leaders pledged €8 billion ($11 billion) to address the problem. And Germany already had a program ready to help.

So Ribeiro, who asked that his real name not be published in order to protect his identity, applied for assistance at the end of 2013 through the program, which carries the bureaucratic moniker MobiPro-EU. The program is intended to help young unemployed people, particularly those from Southern Europe, start careers in Germany. At the same time, it aims to help German companies fill vacant job positions in a country where firms in many sectors are having trouble recruiting enough skilled workers.

A Nice Gesture Turns into a Problem

But what was intended as a generous gesture has become a problem for the German government. Ribeiro himself is currently experiencing the program's shortcomings. The 27-year-old, who hails from northern Portugal, studied nursing at a college in Braga, but he hasn't been able to find a job at home. "I have sent out at least 20 applications," Ribeiro says, "but I haven't received a single response." With the economy at rock bottom as a result of the euro and debt crisis, prospects on the labor market for nurses are virtually non-existent in Portugal these days.

Through a private placement company, Ribeiro obtained a contract to work in an old-age home in a town in the Black Forest. For months now, he's been attending daily German classes in Braga; next week, he is supposed to fly to Germany to start his job and complete further language training. The MobiPro program is supposed to pick up the costs of his travel and German classes, but Ribeiro hasn't seen a cent yet.

On March 27, he received a letter from the Federal Employment Agency's International Placement Services (ZAV) office in Germany informing him that his application couldn't be decided on at the moment because the agency hasn't been provided with sufficient federal funding for the program in 2014.

Money So Well Spent There Should Be More of It

Although the program was launched by then-Labor Minister Ursula von der Leyen with great pomp last year, it is dramatically underfunded. The program may make sense, pairing as it does young workers from Southern Europe, with its persistently high unemployment rates, with companies in Germany with acute needs for trainees and skilled workers. In addition to travel and language class expenses, the program also picks up costs for vocational training for young people seeking to build a future in Germany.

But it appears that German leaders have been caught off guard by the sheer number of young people interesting in pulling up stakes and establishing themselves here. Figures supplied by ZAV show that 9,000 young people from around the EU had applied for the program by the end of March.

Berlin budgeted €33 million for the program this year. However, the federal government's 2014 budget is still provisional and only part of the funding has been provided. The amount already disbursed to ZAV had already been spent by the end of February, prompting the agency to suspend the processing of applications.

The Federal Employment Agency also appears to have been caught off guard by the massive demand. Sources at private placement agencies claim that the ZAV's central hotline was getting so many calls that it was often unreachable during the month of February. And people who sent in their applications by email got an autoreply: "The recipient's mailbox is full and cannot receive any additional messages."

Berlin Scrambles to Find a Solution

The budget for the rest of the year has since been increased to €48 million, but the Federal Employment Agency's own internal calculations show that it will be nowhere near enough to cover demand. Officials have calculated that after the costs are covered for the 3,500 youth seeking traineeships and 1,300 skilled workers who have already been accepted into the program this year, only €6.7 million in funding will remain for additional applicants. They estimate that will be enough to cover about 500 youth seeking traineeships for the rest of the year, but the agency already has 2,300 such applications. It hasn't even factored in outstanding applications for people applying for the skilled workers part of the program.

Officials at the Federal Labor Office say their actual funding needs for the program this year will be around €100 million, with an additional €105 million needed in 2015, a sum they assume will continue to grow in subsequent years.

Currently, MobiPro is scheduled to run through 2018, with the government envisioning a total of €359 million in funding. If the demand remains as high, though, the needed sum could swell to €800 million.

Politically, it's a hot button issue for Chancellor Merkel's government, which is scrambling behind the scenes to try to find additional funding. The program was in part intended to improve Germany's image across the EU -- an image which had suffered as a result of Berlin's strict stance in the euro crisis. Furthermore, a promise is a promise. Currently, a meeting in German parliament is set to seek a solution on May 5.

By then, Luis Ribeiro should be busy at work at his new job in the Black Forest -- with the hope, of course, that his bills will someday be paid by the German government. 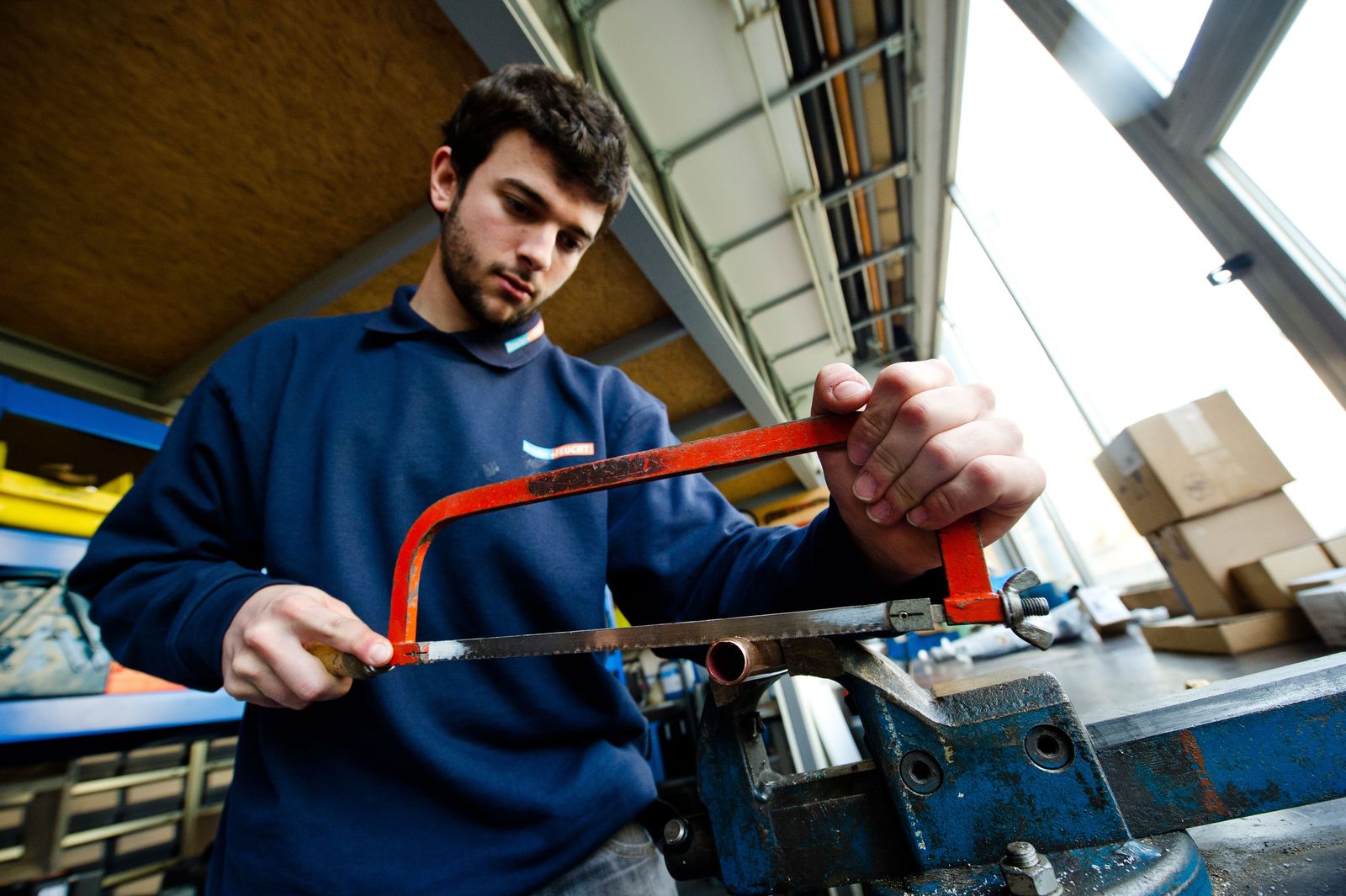 A young man from Spain participates in a traineeship program in Bad Homburg, Germany. Thousands of unemployed young adults have applied for support from a German government training and jobs placement program.