If there's one notion at the core of the planned European banking union, it's that of playing it safe. The union has been designed to ensure that the financial markets will become more stable and that shareholders and creditors will be held more liable than taxpayers. And it is meant to ensure that Europe will be better armed if the European Central Bank comes across unexpected holes in balance sheets when it conducts stress tests this spring on the euro zone's 130 largest banks.

But when German Finance Minister Wolfgang Schäuble of the conservative Christian Democratic Union (CDU) party appeared before journalists just before midnight in Brussels on Tuesday, it became clear that things, once again, are anything but secure. Schäuble negotiated for close to 14 hours with his counterparts in Europe over the banking union, which many champions of the European Union believe is as epochal an event as the launch of the euro.

In the end, though, the issue was delayed until Dec. 18, when the finance ministers will meet again just before the regularly planned EU summit. "We're on the way towards achieving this," Schäuble told reporters, but the "political decision" can only be made in the coming weeks.

By then, it is highly likely that he will be installed again as finance minister in the new German government, to consist of a coalition of the Christian Democrats and the center-left Social Democratic Party. Still, it remains uncertain whether he will be able to present the banking union as some kind of gift marking the start of his new term in office by the end of the year.

The fact that the time frame is so narrow isn't just Schäuble's fault, although he is partly to blame. Tuesday's marathon negotiations were only the latest example of tactics by Berlin to block progress on EU issues. Annoyed EU representatives used the term "Germany's eternal litany" to describe negotiations on Tuesday.

The German government has recently signaled willingness to compromise on the issue of which body would be responsible for deciding if a bank needs to be liquidated. Initially, a newly created committee with representatives of national authorities would assume this responsibility, but the formal decision could then be left to an EU body like the European Commission. In disputed cases, the European Council, the powerful body that includes the leaders of the 28 member states, would be brought in to arbitrate.

Berlin has also agreed in principle to calls for a liquidation fund for failing financial institutions that would have a capacity of €55 billion ($76 billion) within 10 years. But the EU member states are supposed to agree among themselves on how these funds can actually be used, with greater voting weight being given to more populous countries. This idea hasn't gone over well with some governments, because they fear that Berlin, working together with a few small countries, would be able to block decisions. In addition, the money in the fund would not be available for use until it is transformed into an official EU instrument in 10 years' time.

Under the "liability cascade" plan being promoted by Schäuble, however, bank shareholders will be required to pay part of the costs for liquidating a bank starting in January 2016. Owners and creditors would first be required to cover any liquidation costs before any taxpayer money could be brought in. Berlin has had success so far in negotiations on this point. The German government had wanted to introduce this rule as early as 2015. But other member states like Italy pleaded for it to start at the earliest in 2018. They fear the move to start in 2015 might frighten investors.

And there's one additional play to safety: Germany continues to oppose using the European Stability Mechanism, the permanent euro-zone rescue fund, as a backstop for fledgling banks. Other countries have suggested employing the fund's billions of euros as part of a future banking union resolution mechanism.

The amount of caution being exercised in Berlin, as well as the many fundamental legal questions the banking union has created in recent months, has surprised experts. "These details are of course important to Berlin, which fears (the union) could be challenged at the German Constitutional Court," Jacob Kirkegaard of the Peterson Institute for International Economics told SPIEGEL ONLINE. "Amid the institutional skirmishing, it appears as though Berlin has lost sight of the core idea of a banking union."

Among those ideas are that national banking supervisory authorities would no longer monitor national banks -- a principle that would be buried if Germany's savings banks and credit unions are excluded from EU supervisory as Berlin is planning. The second goal was to finally break the fatal link between banking crises and national crises. When Spain and Ireland were forced to back their financial institutions with billions of euros, the moves ruined their government budgets.

So will the planned scope of the banking union be able to fulfil these expectations? That's unlikely. The rescue of Anglo Irish Bank, which isn't particularly big, alone cost some €30 billion a few years back. A bailout on that scale would exhaust a huge chunk of the liquidation fund. "Even if these difficult negotiations finally end next week, what we will get at first is a mini-solution," said Kirkegaard.

German Finance Minister Wolfgang Schäuble met with his EU colleagues until midnight on Tuesday to discuss Europe's planned banking union. Berlin is playing it safe in the talks, but that hesitancy threatens to derail the project's core ambitions. 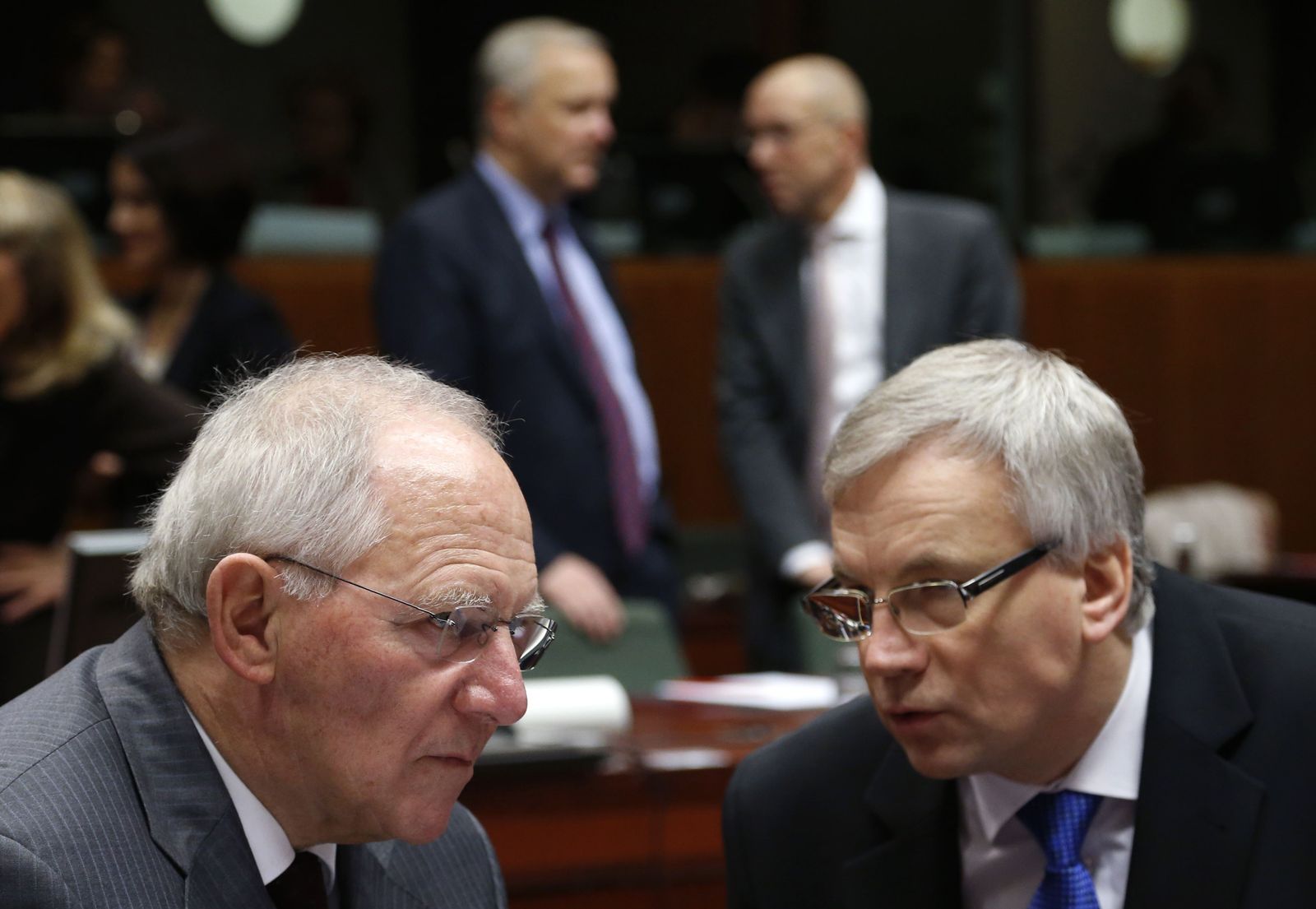