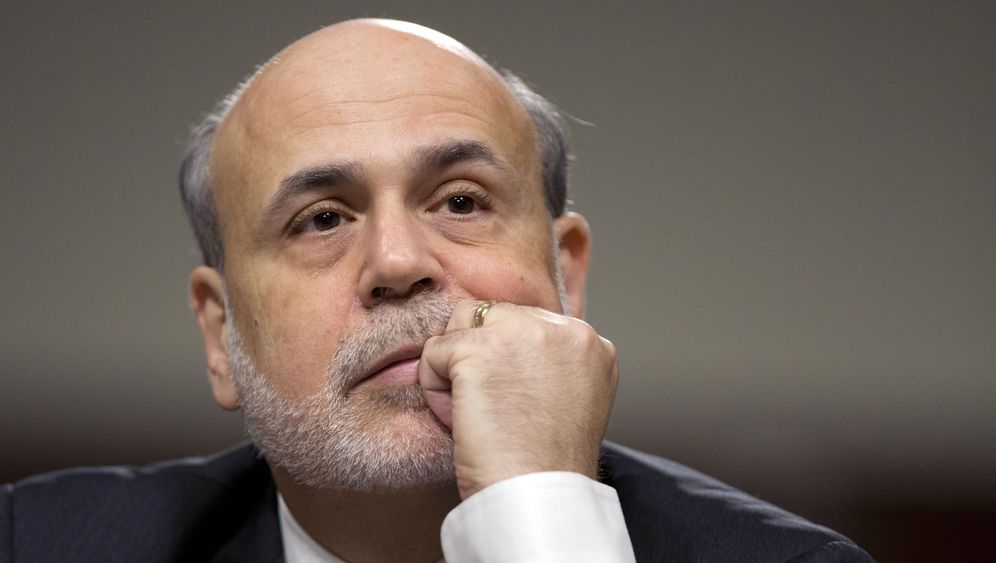 Fuchinobe doesn't look like the kind of place where speculators have struck it rich. The commuter rail station near the Japanese capital of Tokyo is surrounded by drab apartment buildings and small single-family homes. But the neighborhood is also home to Yuka Yamamoto, 44, a star among Japan's so-called shufu toshika, or "housewife investors."

Yamamoto, a chemical laboratory worker by profession, has written about 40 books with investment tips for housewives. She makes television appearances and recently explained what she thinks about the boom that Prime Minister Shinzo Abe and Bank of Japan chief Haruhiko Kuroda have fueled with their relaxed monetary policy known as "Abenomics."

"I think Abenomics is great," says Yamamoto. The woman, wearing a white blouse and blue lacquered shoes, is pleased with herself. She said that she sold a large portion of her shares weeks ago and that she rode out the most recent mini-crash on the Tokyo Stock Exchange. After climbing by more than 80 percent since the end of November, the Nikkei index dropped more sharply in late May than it had since the 2008 Lehman Brothers bankruptcy. The wild swings have continued in June, with the Nikkei plunging 6 percent on Thursday.

Investors have also been shocked at the speed at which prices have risen and then collapsed on markets in Europe and North America recently.

The rapid changes were triggered by a man they sometimes call "Helicopter Ben" in the financial markets because he once flirted with the idea of throwing money out of a helicopter to fight the crisis. While the Bank of Japan has just announced that it intends to pump even more money into the system, US Federal Reserve Chairman Ben Bernanke wants to slowly wean the economy off the cheap money that has intoxicated investors for years. That, at least, is what many investors believe. And because activity in the markets is based primarily on expectations, stock and bond prices have fallen recently, while long-term interest rates have gone up, even though none of the major central banks has made any changes to their current, ultra-low prime lending rates. The monetary watchdogs are also continuing to buy government bonds and other securities in a big way.

But investors are worried about withdrawal. They wonder whether the economies in the United States, Europe and Japan are robust enough to manage without cash infusions, or even with a somewhat reduced dosage.

When the financial crisis escalated in 2008, the Fed, the European Central Bank and other central banks began their cash therapy. Almost in lockstep, they reduced prime rates to close to zero and began buying up bonds on a large scale. To this day, the leading central banks have inflated their balance sheets with such practices to $10 trillion (€7.5 trillion).

But now something is changing. "For the first time, it looks as though one country, namely the United States, is leaving the crisis behind," says Ulrich Kater, chief economist at DekaBank. "And, also for the first time, a central bank, the Fed, is showing that it is thinking about normalization."

But will it also transform the thought into action? Can it even do that without the financial markets going haywire? So far, only the US economy has stabilized to a sufficient extent that a shift in monetary policy seems conceivable. And even there, the recovery is based on cheap Fed money and could collapse if deprived of this foundation.

'A Dead-End Street at Full Speed'

Even if the experiment works in the United States, a shift in Fed policy would also bring about consequences in Europe and Asia -- for banks, governments, investors and depositors. There, too, prices could fall and yields could rise. Crisis-ridden countries could once more run into problems securing financing, and banks could be burdened with new write-offs.

"The central banks have driven into a dead-end street at full speed. They can't turn around. All they can do is slowly apply the brakes," Jochen Felsenheimer says in his assessment of the situation. The Munich native is managing director at investment management firm Xaia, something of a tamed hedge fund that operates in accordance with stringent German rules.

But the central bankers also cannot continue along the current trajectory. "The policy of cheap money inflates asset prices," says Felsenheimer. The later the normalization occurs, the more painful it will be.

And because Bernanke also knows that, the Fed chief began a very gentle withdrawal process in May. "In the next few meetings, we could take a step down in our pace of purchase," Bernanke told the US Congress last month.

The Fed currently spends $85 billion a month to buy US treasury bonds and mortgage-backed securities. This has enabled it to keep mortgage rates low and reinvigorate the real estate market. Merely a hint from Bernanke that the Fed could "take a step down" has caused 30-year mortgage rates to rise from 3.35 percent in early May to almost 4 percent recently. Rates on 10-year Treasury notes went from 1.7 to 2.1 percent. Although these numbers are still very low compared to historical rates, the development scares bankers like JPMorgan Chase Chairman Jamie Dimon, who said last week that while normalization is a good thing, it's also "going to be scary."

Bernanke is familiar with these fears, which is why he added that a restriction on bond purchases is not automatically the end of a relaxed monetary policy. It was his way of bringing calm to the markets while preparing them for harsher policies in the future.

David Folkerts-Landau, chief economist at Deutsche Bank, thinks this is the right approach. "In light of the economic situation, an extremely expansive monetary policy involving securities purchases of this scope hasn't been justified in a long time," says the bank economist. "We are optimistic for the American economy and expect robust growth in the coming years."

That's why Folkerts-Landau expects the Fed to reduce its bond purchases from $85 billion to $60 billion this fall. "The Fed could also raise the prime rate in the second half of 2014." For this reason, he believes that the yield on 10-year Treasury notes could rise to 3 percent by the end of the year.

In contrast to Europe, the debts of banks, businesses and private households have declined in the United States, while government debt has increased. If interest rates went up, it would become more difficult for the government to reduce its debt. On the other hand, the American financial sector could handle a moderate rise in interest rates, says Folkerts-Landau. "There will be losses, but they will be distributed among many investors and will hardly affect banks and insurance companies. The financial system in the United States is much more stable today than it was in 2007."

Experts are more skeptical when it comes to Europe. "If the ECB stops its cash infusions, many banks in the euro periphery will be threatened with insolvency," says Jörg Rocholl, president of the European School of Management and Technology.

Banks are diligently repaying certain ECB loans, ECB President Mario Draghi stressed last week. But he also made no secret of the fact that "unconventional" measures for less favorable times are still being vigorously discussed at the ECB -- additional relief for banks that borrow short-term money from the ECB, as well as longer-term cash infusions. The ECB wants to continue its "accommodative monetary policy" for as long as necessary, Draghi explained. Indeed, the central bank has just extended its full-allotment lending policy to banks in the euro zone by at least a year.

But the Bank of Japan remains especially uninhibited as it continues to flood the markets with money. The central bank's new governor, Kuroda, is buying up more than 7 trillion yen (€54.5 billion) in government bonds each month. That's 70 percent of all new bonds.

Whether Japan will manage to emerge from its ongoing crisis thanks to Abenomics doesn't just depend on the central bank, which has already kept interest rates at close to zero since the mid-1990s without any visible success. The financial markets are waiting for reforms and have been disappointed by announcements to date.

Meanwhile, Japan's celebrity housewife Yamamoto firmly believes in the long-term success of Abenomics. And even if the United States restricts its loose monetary policy, which she expects it will do by the end of the year, it will be good for Japan. "Then the dollar will rise and the yen will fall. And that benefits Japanese export companies."

Just as Yamamoto predicts a favorable outcome for Japan, Deutsche Bank economist Folkerts-Landau argues that Europe could see similar benefits. "The euro will decline to between $1.20 and $1.25 by the end of the year, and it could even drop below $1.10 by 2015."

This could help exporters in the euro zone. But last week it was the dollar that fell, because investors still aren't quite sure when the shift in interest rates will actually happen and what its consequences will be.

This makes it difficult for investors to adapt to the changes. Munich investment manager Felsenheimer anticipates that prices will fall for all risk investments as US interest rates rise. "The markets that recently benefited the most from the glut of money will be the most strongly affected -- in other words, stocks, bonds and real estate."

According to Felsenheimer, yields on government bonds from Europe's debt-ridden countries, which have declined drastically in the last 10 months thanks to Draghi's bailout policy, will likely rise considerably again. "But investors would also pull money out of emerging economies," he says.

A sharper rise in interest rates would give risk-averse savers a reason to rejoice. Interest rates on instant-access savings accounts and fixed deposit accounts might finally go up, so that assets would no longer be consumed by inflation.

More of a Curse than a Blessing?

But for people buying real estate, rising interest rates will eventually pose a problem, because the low rates at which they have borrowed money in recent years are usually locked in for only five or 10 years. After that, the mortgages are generally renegotiated. "Many people don't realize how expensive this can get," says Dorothea Mohn of the Federation of German Consumer Organizations, which for some time has cautioned against the collective real estate buying frenzy to which Germans seem to have succumbed. "Too many loans are calculated on very narrow margins," says Mohn.

Even for life insurance customers, an interest increase, depending on how drastic it is, can be more of a curse than a blessing. Insurance companies have been complaining about low interest rates for years, because it forces them to invest most of their customers' premiums in relatively safe bonds, which are hardly profitable at the moment. On the other hand, these funds are also locked in at low bond yields for years. If interest rates go up within a few months, the investment strategists for the insurance companies have few options. This means that their customers also have little to gain from a boom in interest rates, at least in the short term.

Central bankers know what years of low interest rates and all the resulting cheap money have done to the markets. But eliminating these "sweets" again is difficult, says one expert, who isn't willing to rule out a scenario like the one in 1994. At the time, the Fed's decisions on monetary policy triggered a global tremor in bond markets. Within nine months, rates on German government bonds rose from 5.7 percent to just under 8 percent.

Jaime Caruana, general manager of the Bank for International Settlements, recently outlined what is needed so that central banks can finally regain the freedom to impose tighter monetary policy without shocking the markets: "Banks, households and firms need to redouble their efforts to deleverage and to repair their balance sheets, while policymakers must redouble their efforts to enact far-reaching reforms."

Progress in this area, he added, would also enable central banks to normalize their monetary policy. But how likely is that?