Porsche, the debt-laden German sports carmaker, on Monday rejected Volkswagen's offer to buy a 49 percent stake as the damaging power struggle between the two companies escalated. "It's not a viable option to sell 49.9 percent of Porsche AG to VW," a Porsche spokesman told German news agency DPA. 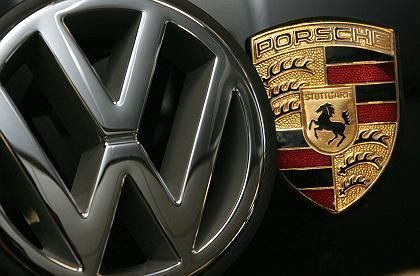 Time is running out for debt-ridden Porsche.

The spokesman said Porsche couldn't accept the offer because it would then have to immediately pay back the €10.75 billion ($15.06 billion) loan it has secured from a banking consortium. Earlier, Christian Wulff, governor of the German state of Lower Saxony which owns a 20 percent stake in VW, called on Porsche to reach a decision soon on the proposed takeover. According to information obtained by SPIEGEL, Wulff and VW's management have demanded that Porsche agree to a merger by the end of June. Under the plan, VW would acquire 49 percent of Porsche for between €3 billion and €4 billion, which would enable Porsche to pay back a large part of the debt it incurred trying to acquire a majority of VW last year.

The supervisory board chairman of Porsche, Wolfgang Porsche, and works council chief Uwe Hück responded to the offer by issuing a joint statement saying: "We will not be blackmailed."

Porsche's tough stance could worsen its problems. According to business daily Handelsblatt, the emirate of Qatar, the last prospective investor that could still preserve Porsche from being swallowed up by Vokswagen, has called for a decision soon and is only interested in buying a stake in a merged VW/Porsche group, not in either of the two companies separately.

The dispute pushed down VW stock by up to to five percent to €237 on Monday. "The quarrelling between VW and Porsche is weighing on the stock," one share trader said. "The investors are worried that the companies are focusing too much on their power struggle and not enough on their business."