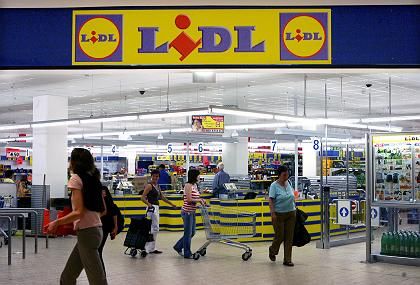 Lidl is a super cheap alternative to the standard supermarket. But critics claim its ethical standards seem to be equally cheap.

The European discount supermarket chain Lidl sells itself with the slogan "Where quality is cheaper." And when it comes to its employee practices, it certainly appears to be cheap, if new allegations turn out to be true.

According to a report by the German weekly magazine Stern, Lidl has been spying for months on employees in several of its outlets. The company has allegedly been hiring detectives to investigate workers, both on the job, on cigarette and coffee breaks -- and even on the toilet.

The explosive report triggered a government probe into the allegations on Wednesday. A spokesperson for the Interior Ministry of the southern German state of Baden-Württemberg described the claims as "unparalleled," telling SPIEGEL ONLINE: "The supervisory authority has launched an investigation into possible violations of privacy protection rules." The ministry has jurisdiction because Lidl's corporate headquarters are located in the city of Neckarsulm in that state. The spokesperson said investigations could take several weeks and wanted to make no predictions about their possible outcome or consequences.

The bulk of the reports cited by Stern come from Lidl outlets in the state of Lower Saxony, plus individual ones from the states of Rhineland-Palatinate, Berlin and Schleswig-Holstein. The observation practices were routine, the report alleges: A detective would install between five and 10 miniature cameras in the store, telling the manager it was an anti-theft measure, and then use the technology to observe employees' behavior.

Stern claims to have obtained hundreds of pages of transcripts that document the movements and conversations of employees, for example: "Wednesday, 4:45 p.m.: Although Ms. N. has not accomplished much in the food and reduced wares department, she takes her break right on time. She sits together with Ms. L.; they talk about their wages, bonuses and paid overtime. Ms. N. hopes that her pay has been transferred already because she desperately needs money for this evening (reason = ?)".

The transcripts also get into employees' private lives ("Her circle of friends consists mainly of junkies") and appearances ("Ms. M. has tattoos on both lower arms"). In their tone and detail, the observation logs invite comparison to those of the Stasi, the East German secret police.

Particularly controversial is a report from the Czech Republic where, according to Stern, female employees were allegedly prohibited from going to the bathroom during work hours -- unless they had their period, which they were to indicate outwardly by wearing a headband. While Lidl denies the report, it has yet to issue an injunction on a citizen's group or a newspaper that are publicizing the case widely.

Although Lidl has not denied the existence of the transcripts, Lidl spokesperson Petra Trabert told Stern they were not intended as "employee observation but rather to detect possible misconduct."

Achim Neumann, retail expert at the service employees union Ver.di, told SPIEGEL ONLINE the dimensions of the allegations were "completely new to me." He said his union would provide support to any Lidl employees who sought to take legal action against the retailer and called Lidl's alleged behavior "a mess beyond compare."

According to Ver.di, the observation logs respresent a violation of both data protection laws and human dignity, as it is defined and protected by the constitution.

In 2004, Verdi published "Das Schwarz-Buch Lidl Europa" ("The Black Book on Lidl in Europe"), documenting what it claimed to be the chain's systematic abuse of its employees' rights. An updated version appeared in an English translation in 2006. It contains allegations of breaches of working-time directives, withheld salary payments and threats against union members, as well as spying and eavesdropping on workers.

With 7,000 stores in Germany, Lidl rivals competitor Aldi as Germany's leading discount supermarket. It operates in over 17 countries across Europe and has an annual sales volume of over €43 billion ($68 billion).

With reporting by Anselm Waldermann.