They were expecting pack ice, icebergs and storms. As a precautionary measure, a Russian icebreaker had been dispatched to protect the freighter MV Nordic Barents from the ravages of the Arctic Ocean.

In the end, though, only a few broken up ice floes drifted by on two occasions. "The nuclear icebreaker was more for decoration than anything else," says Felix Tschudi from the shipping company that chartered the freighter loaded with iron ore concentrate. This week, after traveling 5,700 km (3,500 miles) through the Polar Sea, the ship will arrive in the Chinese port of Lianyungang -- "and we didn't have to stop once," says Tschudi with satisfaction.

With a mixture of hope and suspicion, shipping companies, politicians and environmentalists have observed how far the sea ice has withdrawn towards the North Pole this year. Will the shrinking polar ice cap soon turn global shipping routes on their head?

Just a few weeks ago, the Russian tanker Baltika, laden with 70,000 tons of gas condensate, sailed without problems from the Russian port of Murmansk, through the Arctic and on to the Chinese city of Ningbo. Shipping via the polar route is gradually becoming routine. This brings Asia closer to Europe. The route of the MV Nordic Barents, for instance, from the Norwegian port of Kirkenes to China, was shortened by roughly 50 percent. "That saved us 15 days at sea," says Tschudi.

Is the world's eighth ocean actually becoming a "trans-Arctic Panama Canal," as the delighted Icelandic President Ólafur Ragnar Grímsson recently said? Indeed, in addition to opening up the Northern Sea Route along the Russian Arctic Coast and Siberia to the Far East, climate change is unblocking the Northwest Passage -- and blazing a trail through the heart of the Canadian Arctic. In the 100 years between 1906 and 2006, only 69 ships, primarily sailed by explorers and scientists, ventured the harrowing voyage through these ice-filled waters. Last year alone, however, Canadian maritime law expert Michael Byers counted a total of 24 vessels.

In countries surrounding the Arctic Circle, a new fleet of ships is already taking shape, designed to finally conquer this area and add it to the world's shipping lanes. These ocean-going merchant vessels won't be able to completely forgo ice protection, though. "Even during the summer months, you have to expect isolated ice floes," says climate researcher Lawson Brigham, a former icebreaker captain and now one of the authors of what is probably the most comprehensive study of the new Arctic sea routes.

The Russians are the most ambitious. At an Arctic conference in Moscow last week, they proudly presented their plans for two new nuclear icebreakers with 16 megawatt reactors. Thanks to an adjustable draft, they are also engineered for use in shallow waters.

At the same time, raw-materials magnates have started building ice-breaking ships to transport the wealth of oil, gas and minerals out of the Arctic:

* Gazprom has put the first of two ice-strengthened tankers into service for the Prirazlomnoye oil field. The 260-meter behemoth can grind its way through ice that is 1.5 meters (5 ft.) thick.

* Rival company Lukoil has had three similarly constructed ships built to bring oil from the Varandey offshore terminal in the Arctic to Murmansk.

* The five freighters of the Norilsk nickel-mining corporation can also be used as icebreakers.

Up until now, however, the flattened bows that these ships use to slide onto the surface of the ice and break it open have proven inefficient for moving through open water. This has prompted the Phoenix shipping company in Leer, Germany to design a newly shaped bow. It has been tested in the ice channel of the Hamburg Ship Model Basin (HSVA). "The efficiency is impressive," says Joachim Schwarz.

The highly experienced former HSVA research director plans to collaborate with Russian research institutes to make it possible for captains to sail through the Arctic Ocean. "Based on satellite data, there will be constant predictions for the best shipping channels," explains Schwarz. This is particularly interesting in the spring and fall, when cold and wind create ice barriers with surprising speed.

It is precisely due to this unpredictability that experts like Brigham warn against too much euphoria. He doesn't believe that in the future large numbers of vessels will travel from Rotterdam to Tokyo via the northern transit route. "By contrast, what will really increase is the removal of huge amounts of raw materials from the Arctic," he predicts. This means that rescue and pumping ships are urgently needed to quickly come to the aid of stricken tankers.

The potentially serious nature of such incidents was demonstrated in July by an accident off the coast of the New Siberian Islands. Two tankers, traveling together with an icebreaker, rammed into each other when the lead vessel had to slow down due to heavy ice conditions.

Both tankers were loaded with 13,300 tons of diesel. But the owner, the Murmansk Shipping Company, played it down as a minor fender bender with only a few dents and scratches. It was "no emergency," but merely a perfectly normal "operational situation."

Mehr lesen über
The Race for the Arctic Logistics Transportation 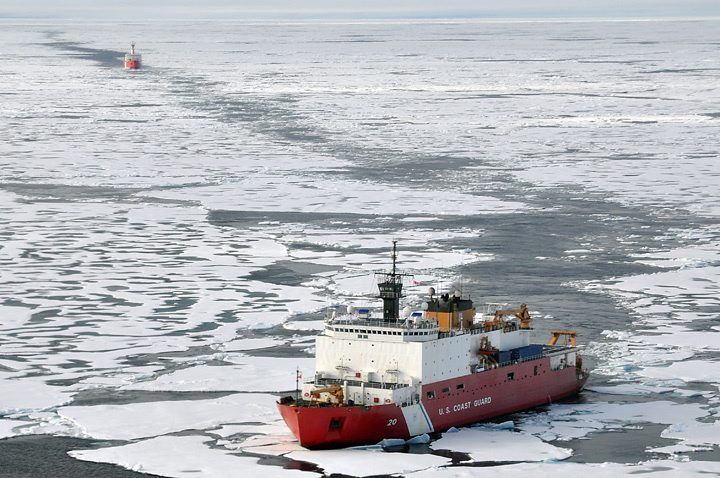