It's about 9,000 kilometers (5,625 miles) from Tokyo to Mulfingen and Künzelsau, but it didn't take long for the shockwaves from Japan to reach these two towns in the southwestern German state of Baden-Württemberg. The region is home to several small and mid-sized companies, including EBM Papst and Ziehl-Abegg, the world's two top producers of fans and specialized ventilation systems.

Normally, the two companies are competitors. Now, however, they share the same fate. One of their key suppliers, a computer chip factory operated by electronics giant Toshiba in northern Japan, is out of commission. Although detailed information about local conditions is hard to come by, everything the German executives have heard suggests that the earthquake and tsunami severely damaged the chip factory.

"If delivery is delayed, it can shut down the entire production process," says Peter Fenkl, chairman of Ziehl-Abegg.

"We expect that our assembly lines could come to a standstill for one to two weeks," says Hans-Jochen Beilke, chairman of operations at EBM Papst.

Although the scope of the catastrophe in Japan is still not fully clear, it's safe to say that the economic damage has been considerable. Japan, the world's third-largest economy, exports its goods to every corner of the earth. Japanese companies supply world markets with modern memory chips, flat-screen TVs, cameras and cars. The French bank Crédit Lyonnais estimates that one-fifth of all high-tech products worldwide are from Japan.

The devastating earthquake and tsunami 12 days ago -- resulting in widespread power outages -- has severely curtailed production. Things could get even worse should attempts to prevent a massive disaster at the nuclear reactors in Fukushima fail.

'Nuclear Winter for the Economy'


Currency speculators are fueling demand for the yen, because they expect the rebuilding effort to cost billions. Nervous investors have sent stock prices in New York, Frankfurt and Tokyo on a roller-coaster ride. Some economic experts fear a global recession, a "nuclear winter for the economy," as a Frankfurt securities dealer put it last week.

Japan once taught the world how a modern factory works. Now, though, it is the disaster in Japan that has brought the global supply chain to a standstill. The transmission Porsche installs into its Cayenne SUV is made by the Japanese manufacturer Aisin, where production has been hampered. A damaged Toshiba plant produces an important memory chip used in Apple's iPad. Automaker Opel has announced plans to cancel some shifts at its plant in Eisenach, Germany this week due to a shortage of components from Japan.

Trade routes have also been impaired. Container ships operated by Hapag-Lloyd can no longer dock at the destroyed port of Sendai. Lufthansa Cargo is no longer offering regular service to Tokyo because of the radiation risk. In a world in which factories no longer maintain large inventories, constant supply is mandatory. Should that supply be interrupted, they can often continue producing only for a few days.

The assembly lines at EBM Papst and Ziehl-Abegg now depend on a handful of electronic components from Japan, often costing little more than a few cents. But they the transformers, resistors and memory chips are vital components in products ranging from fans for laptops and car engines to the air-conditioning systems in New York skyscrapers and hotels in Mecca.

"There will be an impact," says Ziehl-Abegg Chairman Fenkl. His order books are full but his warehouses, unfortunately, are not. And even if he manages to obtain new parts quickly enough, the risks to the economy still exist. "What good would it do if we delivered our fans to an automaker on time, while a supplier of fuel pumps cannot because he is missing parts from Japan?" Fenkl asks.

Experts estimate that it will cost about $200 billion (€142 billion) to clean up and rebuild those parts of the country most affected. Expensive, to be sure, but possible. It cost about $100 billion to rebuild Kobe after the devastating 1995 earthquake -- but the effort proved to be an economic stimulus of sorts for the Japanese economy.

Should the situation become drastically worse in the damaged reactors in Fukushima, the future would look even bleaker. Significant areas in the Fukushima region would become permanently uninhabitable. The shock to the global economy would likewise be considerable.

"The situation would be comparable with Germany after World War II," says Klaus-Jürgen Gern of the Kiel Institute for the World Economy. Michael Heise, chief economist at Allianz Insurance, predicts: "It would shake the financial markets and could bring the recovery of the global economy to a standstill."

Bank Sarasin, a Swiss private bank, expects that in the worst case Japan could permanently lose about 10 percent of its economic strength if large parts of the country become contaminated with radiation. This would curb worldwide growth by about one percentage point.

The stock and foreign currency markets reflect how uncertain the situation is. The benchmark index of the Tokyo Stock Exchange initially lost 15 percent last week before entering a period of fluctuating sharp gains and losses. By the time markets closed last Friday, many companies had made up some of the losses from earlier in the week -- and the rally has continued this week.

Those who had expected the Japanese yen to come under pressure in a time of need were disappointed. In fact, the opposite occurred, as the yen became more and more expensive.

Last Thursday, a US dollar was trading at only 76 yen, the lowest rate since the end of World War II. At that point, the finance ministers and central bank chairmen of the key industrialized nations had had enough. In a joint action, they injected yen into the market, managing to stem the currency's appreciation, at least temporarily.

Japanese companies which rely on exports were relieved at the move. In the current crisis, it is vital that they are able to sell their products at a reasonable price on the world market.

If, that is, they are able to produce any goods at all. 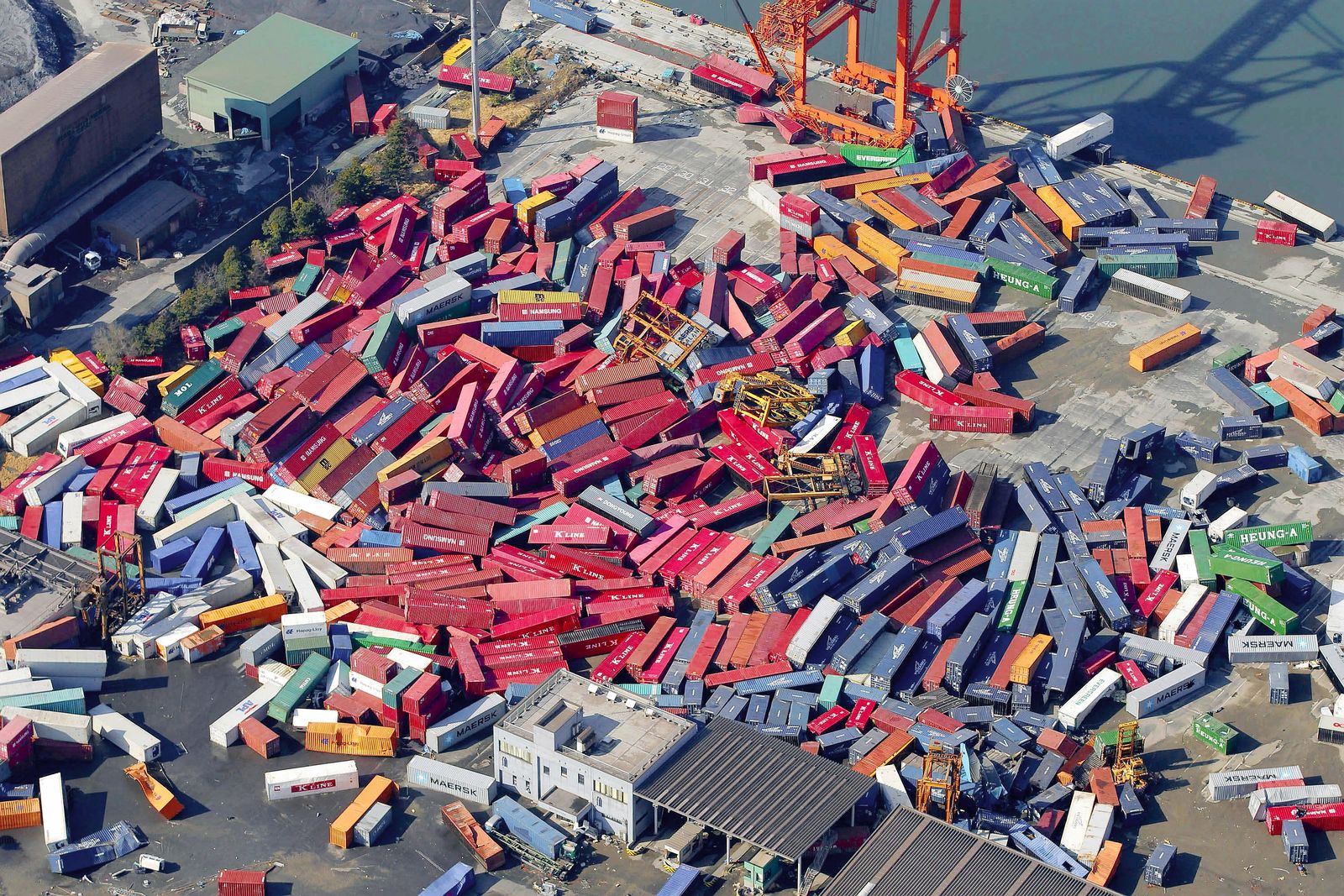 The disaster in Japan has rippled through the global economy.