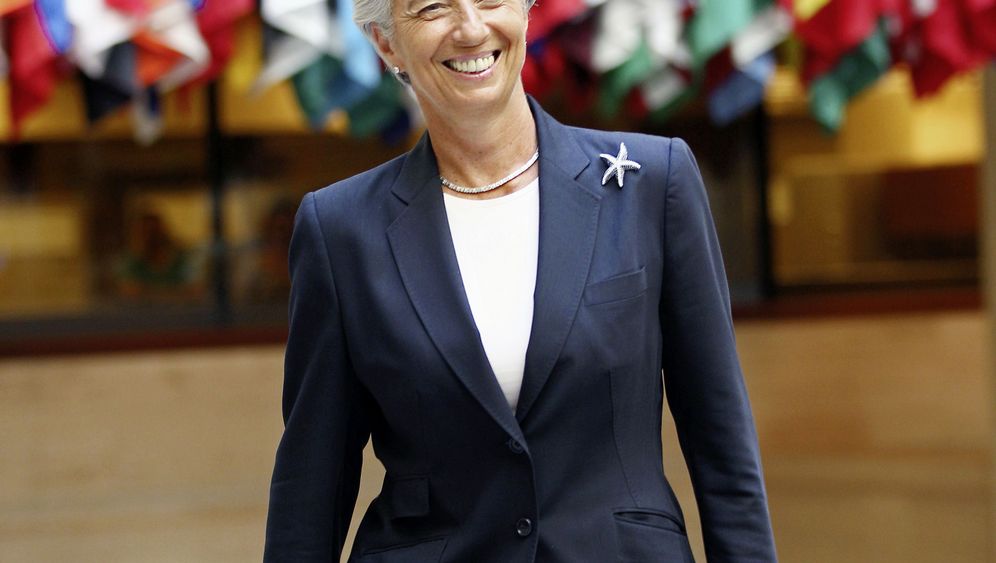 When German Finance Minister Wolfgang Schäuble, a member of the center-right Christian Democratic Union (CDU), leaves for Washington on Thursday for the spring meeting of the International Monetary Fund (IMF) and the World Bank, he'll be bringing plenty of stoicism and satisfaction with him.

"We've done our homework," says the finance minister, heaping praise on himself and his counterparts in the euro zone. There have been few occasions in recent years, Schäuble adds, on which he hasn't felt better on his way to such an important international financial summit.

There is a reason for Schäuble's satisfaction: the most recent decisions reached by the Euro Group, the assemblage of finance ministers of the monetary union's 17 member states. At a meeting in Copenhagen two weeks ago, the group agreed to expand the two bailout funds for the euro. Under the new arrangement, the Europeans will make €800 billion, or more than $1 trillion, available when needed to support ailing member states.

For months, IMF Managing Director Christine Lagarde had urged Schäuble and his counterparts to increase the size of the firewall for rescuing the euro. She promised that if they increased their bailout funds to $1 trillion, the IMF would provide the same amount of money for a global bailout fund. But last Thursday, she dialed down expectations for the fund a little, because the worst fears had not materialized.

Now that the Europeans have delivered on their end of the bargain, they are hoping for more money from Washington. Schäuble and his fellow European finance ministers will arrive in the United States capital with the expectation that there is no longer anything to stand in the way of a greater commitment by the IMF. But their hopes could be deceptive.

The prospect of additional financial aid is anything but a given. Many of the IMF's 187 member states are becoming increasingly resentful of the still-affluent old continent's sense of entitlement. And many politicians in poorer parts of the world resent the well-off Europeans for being so adept at helping themselves.

Particularly irksome to the representatives of the emerging economies is the fact that the IMF has drummed up more money to date for ailing European countries than for the financial crises in Russia, South Korea and Mexico combined. The aid for Greece alone is 23 times as large as Greece's own capital contribution to the fund. Never before in its 60-year history has the fund been so generous with its aid to a country in trouble.

For the group of emerging economies known as the BRICS countries -- Brazil, Russia, India, China and South Africa -- the IMF's largesse is further proof that the old industrial powers of Europe and North America see the Washington-based organization as a self-service shop. A tough wrestling match with these countries is to be expected over any additional aid for Europe.

A Power Struggle over Who Calls the Shots

The meeting in the US capital later this week will also be a showdown. It will revolve around more than the issue of how the world finds its way out of the crisis in the short term. The controversy over additional aid for Europe is merely a symptom of much more deep-seated conflicts. In reality, a power struggle is raging between old industrialized countries and up-and-coming threshold economies over who will be calling the shots in the future in one of the most important institutions of globalization.

For the BRICS countries, the IMF's participation in the second bailout package for Greece and the replenishment of fixed-term credit lines available to the IMF, with which the new aid is to be funded, are welcome occasions for a show of strength. In the long term, their goal is to revise their relative importance within the fund's decision-making bodies to reflect their increased importance to the global economy. A tough struggle is practically guaranteed for the next few years.

At a meeting in New Delhi, India two weeks ago, the leaders of the BRICS countries formulated the strategy they will pursue at the spring meeting in Washington. They agreed that it is "imperative" that their countries play a more important role in the IMF, and that their growing economic importance should also be reflected in their presence and voting power within the organization's decision-making bodies.

They also sent a clear warning in Europe's direction, namely that the efforts to increase the fund's lending capacities could only succeed if reform resolutions that have already been agreed upon are also implemented.

The emerging economies have been striving for more influence in the IMF for years, and in 2010 the established industrial powers finally granted their wish. So far, however, actual practice has belied all major plans.

It has yet to be determined when the increase in the capital ratios for China and other emerging economies agreed at the time will come into effect. And it still isn't clear when the Europeans will comply with their promise to relinquish two seats on the IMF's executive board, its supreme decision-making body, where they are notoriously overrepresented.

'The Europeans Are Not Accommodating Us'

"The Europeans want our help, but they are not accommodating us when it comes to the IMF reform," says Paulo Nogueira Batista, 57, the representative of Brazil and eight other Latin American countries on the IMF Executive Board. "That's very strange indeed."

The Brazilian economist is something of a ringleader for the BRICS countries on the IMF Executive Board. He makes no secret of his skepticism toward the Copenhagen decisions of late March. The Europeans replenished the bailout funds "less than promised," he says. In fact, some €300 billion of the €800 billion have already been earmarked. "The process is very intransparent," says Nogueira Batista.

Not surprisingly, Nogueira Batista and his counterparts are hesitant when it comes to further IMF aid. He stresses that his government has not made any final decisions yet, and that he cannot anticipate any such decisions. Nevertheless, he says, "I don't think it's a done deal that approval will be issued at the spring meeting." It is quite possible, he adds, that the decision will not be reached until the G-20 summit in June.

The BRICS countries are playing for time. They are eager to demonstrate their power, and yet their goals are more far-reaching. They want to shift the voting shares within the IMF in their favor and break the Europeans' traditional claim to the top job at the Washington organization.

"The fund no longer reflects the realities of the 21st century," says Nogueira Batista. "The euro countries are abusing their power within the IMF," he adds, noting that far too much money and, therefore, too much risk is concentrated in Europe. In reality, says Nogueira Batista, the IMF hasn't deserved the title of International Monetary Fund for a long time now. "What we're dealing with here is a North Atlantic monetary fund."

The dispute over the replenishment of funds also offers the up-and-coming powers the chance to drive a wedge between the Americans and the Europeans, who have traditionally stuck together on most issues, including the selection of a new IMF managing director.

This time, however, the alliance seems fragile. The Americans are unwilling to provide additional funding for the global bailout fund, and they are also blocking the implementation of the reform resolutions. US President Barack Obama doesn't dare ask the US Congress to approve more funding for the IMF before the November presidential elections.

"Europe has the capacity to solve its problems. The IMF cannot substitute for a robust euro area firewall," says US Treasury Secretary Timothy Geithner.

This attitude of denial hasn't changed. "The American government is essentially pulling its punches and hoping that there will not be any further disasters this year," say IMF insiders.

Obama is being careful not to expose himself to the accusation that he is wasting American taxpayer money. In addition, the sole remaining superpower often has a tendency to develop a distinct skepticism toward international organizations. Too much international cooperation is incompatible with the country's image of itself as a hegemonic power.

The Republicans in the United States are also using the debt crisis in the old world to support their contention that the European, supposedly socialist economic model has failed. "Europe doesn't work in Europe, and it doesn't work here" Obama's likely challenger Mitt Romney says repeatedly at campaign events, in an effort to strike a blow at Obama, who allegedly plans to introduce a European-style economic model in the United States.

However, there is one beneficiary of the US's restraint: China. Officials with the world's second-largest economy have noted with satisfaction how the Americans have taken themselves out of the game. Any loss of influence by the old hegemonic power suits them perfectly.

With the world's largest foreign currency reserves at their disposal, the Chinese have no trouble coming up with the funds for the IMF. And, unlike Obama, they have no need to take the wishes of a recalcitrant legislature into account.

The government in Berlin views the Americans' restraint with mixed feelings. "It is regrettable that the United States is not making its own contribution," say officials at the German Finance Ministry. Nevertheless, Finance Minister Schäuble's staff is unwilling to abandon all hope. "We are confident that the increase in resources will be approved at the spring meeting, and that the BRICS countries will go along with it."

The Europeans are also betting on the self-interest of the BRICS countries. European countries are not the only ones that could benefit from the additional funds, because they will be available to all member states worldwide. This certainly seems necessary, given the conclusions of IMF studies showing that the euro crisis affects even the most remote parts of the world. In their projections, known at the IMF as "tail risk" scenarios, fund chief Lagarde's experts conclude that the collapse of a country like Spain or Italy could also have a serious impact on countries in Latin America and Asia. The Europeans reckon that the BRICS countries, determined to avoid such aftershocks in their own backyards, will ultimately support the increase in IMF resources.

Meanwhile, the Europeans have lowered their expectations in terms of the scope of IMF aid. They have abandoned the goal of mobilizing $1 trillion. If the increase in resources only amounts to $800 billion, say the negotiators, that too will be "a nice outcome."