The Queen has already cancelled the Christmas party at Buckingham Palace. Now she will now have to suffer further impertinences.

The British austerity measures announced on Wednesday envisage drastic cuts to public spending, including a sharp reduction of the royal budget. Great Britain is facing a "sober decade," according to Mervyn King, the governor of the Bank of England.

The British newspapers have dubbed it "Axe Wednesday," the day that Chancellor of the Exchequer George Osborne finally announced deep cuts to public finances. The Conservative-Liberal Democrat coalition's finance minister wants to reduce the gigantic British public deficit to as close to zero as possible over the next four years. And to achieve this everyone is going to have to bleed.

"Today is the day when Britain steps back from the brink, when we confront the bills from a decade of debt," Osborne said when introducing the measures to the House of Commons. In June he had already outlined in broad strokes the measures he would take. Now came the details.

Ministerial budgets are to be cut by an average of 19 percent, the 39-year-old Tory politician announced. And 490,000 public sector jobs will disappear over the next four years. State expenditures will be slashed by 83 billion pounds (€94 billion, $131 billion), and taxes increased by 29 billion pounds (€32 billion, $45 billion.)

These are enormous figures, and it didn't take long for the public outcry. The labor unions have mobilized their members to oppose the job cuts, while students have hit the streets to protest the increase to tuition fees. However, there is unlikely to be anything like the kind of public unrest currently underway in France. Despite all of the outrage that many groups are expressing, most British people have long since accepted their fate. According to opinion polls, the majority think the austerity measures are unavoidable.

The coalition has been preparing the public for this day since it took office last May. They warned to expect the toughest cuts since the World War II. Ministries were given the task of coming up with two savings scenarios, one with cuts of 25 percent and another with cuts of 40 percent. Only the Health and Development Ministries were exempt.

The cuts announced on Wednesday were "only" 19 percent -- if there was any surprise at all, it was a positive one. And Osborne made every attempt to argue that the measures are fair. The government is even raising the child allowance for the poorest families.

Nevertheless, the shock is huge:

It took an hour for Osborne to get through his list. He said that the only alternative to his radical package of measures would be state bankruptcy. Indeed, Great Britain's deficit is the highest in Europe and ratings agencies have repeatedly warned of a downgrading of the country's credit rating.

Many observers, however, say that a more leisurely debt reduction would have been enough. The former Labour government had envisioned halving the deficit within four years rather than balancing it. Financial markets likely would have been satisfied with such a path.

As it stands, Osborne's policy is nothing short of a massive political experiment, a high-stakes bet with an uncertain outcome. A senior official in the Treasury told the Financial Times that no one knows quite what will happen next. The Labour opposition has accused the Tories of using the debt crisis as a pretext to push through their vision of a smaller national government.

Numerous economists have warned of a relapse into recession. Joseph Stiglitz, a Nobel Prize-winning economist, wrote in the Guardian on Tuesday that "austerity is a gamble which Britain can ill afford." He says that the measures could slow or stop the country's economic recovery. Martin Wolf, a columnist for the Financial Times, estimates that the savings measures could dampen growth by one to two percentage points a year.

There are reasons for concern. Early economic indicators are worse than they were just six months ago. Real estate prices are weak and consumption, both private and commercial, is cautious. Just how economically damaging drastic savings measures can be has been seen recently in the case of Britain's neighbor Ireland.

All the British government can do now is cross their fingers and hope that their plan succeeds. The hope is that the British economy will follow the model of Canada, which saw solid growth following deep spending cuts in the 1990s. Prime Minister David Cameron and his Liberal deputy Nick Clegg hope that the immediate pain caused by the budget cuts will be forgotten by the time Britons next go to the polls five years from now. If all goes well, they hope that the budget will be healthy enough by then to make room for tax cuts.

Cameron is aided by the fact that he has the backing of some of the country's most influential newspapers. "It'll hurt," wrote Britain's largest circulation tabloid The Sun. "But the prize is worth the pain."

And at least the British can take comfort from the fact that watching television won't be getting any more expensive. Licence fees for the BBC aren't to be raised for the next six years. 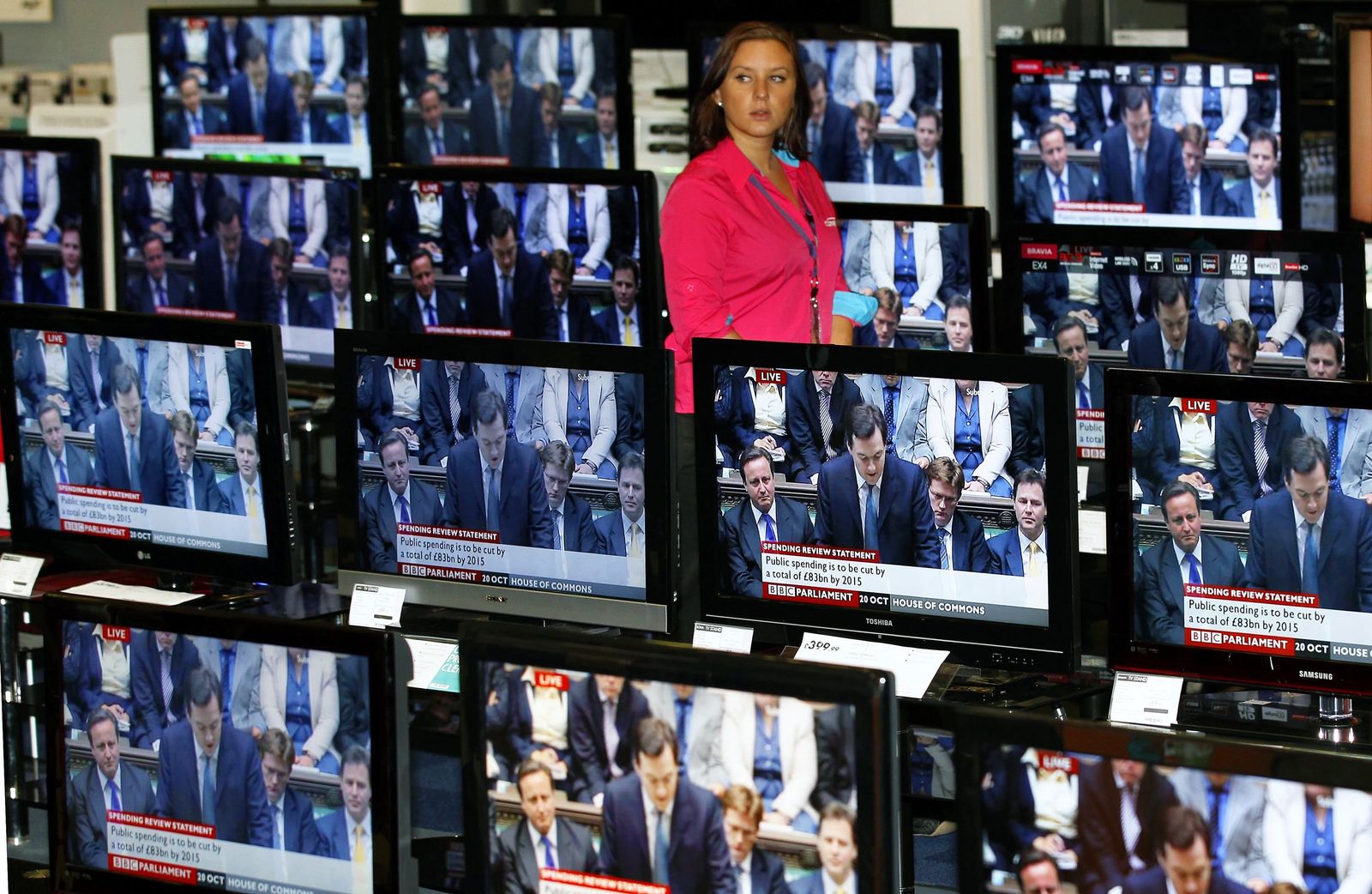 All eyes were on Britain's Chancellor of the Exchequer George Osborne on Wednesday as he announced the details of the government's far-reaching package of spending cuts.