When the US bank Lehman Brothers went bust last September, tens of thousands of private German investors who had bought supposedly safe Lehman securities got burned. Since then, they have held protests and demanded compensation from their banks, claiming they were not warned of the risks. 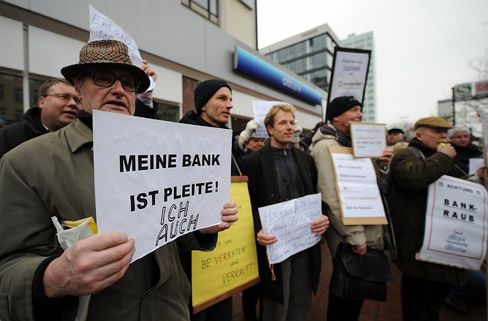 "My bank is broke -- I am too": German investors protest outside a Citibank branch in Hamburg.

Now a German bank has admitted that it gave customers the wrong advice relating to the purchase of Lehman Brothers certificates. According to a report on the German public television station ARD, the savings bank Frankfurter Sparkasse (Fraspa) said it had discovered that "in a very small number of cases the advice did not meet our quality standards."

In a statement confirming the television report later on Monday, the bank also said it had offered to compensate customers as a gesture of goodwill "in a small number of cases of financial hardship."

Fraspa began to compensate individual clients who had invested in Lehman certificates in March. It concentrated on investors who had been particularly hard hit when their securities lost their value after Lehman Brothers went bankrupt.

However consumer rights advocates have criticized the bank's approach to compensation. "Arbitrary compensation given at the whim (of the bank) is unacceptable," Hartmut Strube from the North Rhine-Westphalia Consumer Rights Center told ARD.

Many investors who were sold the Lehman certificates -- which were specially developed for the German market -- are suing their banks because they claim they were not informed that they risked losing all their money should the bank go bust. Many of the customers were pensioners who thought they were buying rock-solid investments. The banks are accused of deliberately targeting unsophisticated older clients who they dismissively referred to as "AD" customers, which stood for "old and dumb" in German. Unlike normal savings accounts, the securities were generally not covered by Germany's deposit protection scheme, which guarantees investments in the event of banks going bust.

Consumer rights organizations estimate that around 40,000 people in Germany lost money when Lehman went under. Some of the banks have already offered voluntary compensation to their clients. The Hamburger Sparkasse savings bank announced in February that it had already compensated 1,000 of a total of 3,700 investors affected by Lehman's collapse.