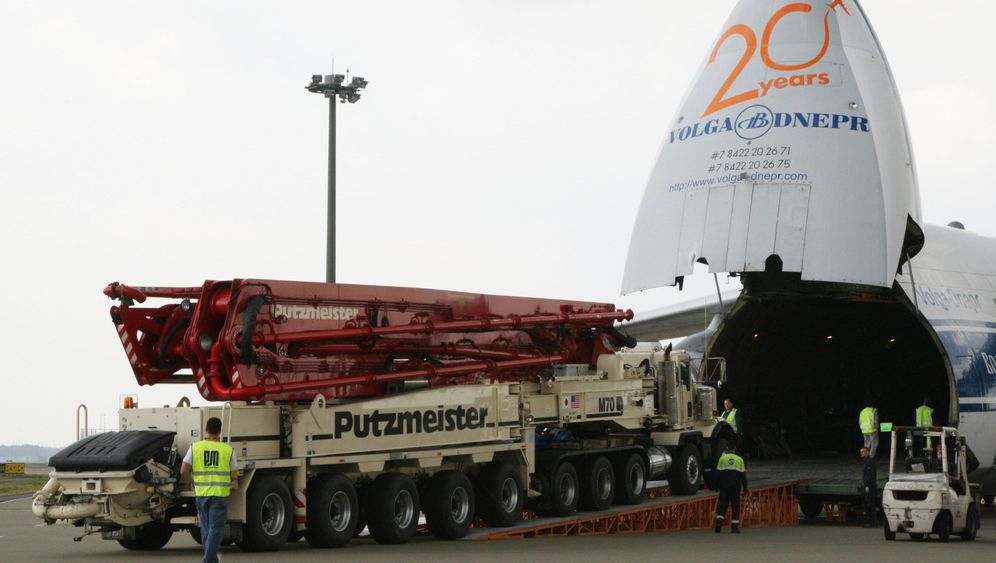 Is there a greater insult for a business owner in Germany's famously house-proud Swabia region than being told its facilities are too dirty? If there is, it would have to be the accusation that he has sold his life's work to the communists.

Karl Schlecht has had to live with this verdict since the Friday before last. Schlecht, 79, has sold the company that he founded, the concrete pump manufacturer Putzmeister Group, to its rival Sany, a construction machinery giant from the southern Chinese city of Changsha.

The deal, hammered out in secret, has triggered a "state of shock" at Putzmeister headquarters in Aichtal near Stuttgart, says a member of the company's works council: "Not even the supervisory board was informed." On Monday of last week, 700 Putzmeister employees gathered in front of the factory gates to protest the sale to the Chinese.

In the meantime, company founder Schlecht went on a tour of China, at the invitation of the purchasers. A butler attended to his needs in a luxury guesthouse in Changsha, and Sany Chairman Liang Wengen put one of his four Maybach limousines, complete with a chauffeur, at Schlecht's disposal. The German guest was also flown in the company helicopter to the birthplace of the former Chinese dictator, Mao Zedong.

Schlecht cannot understand the consternation of his employees in Aichtal. He calls their reaction "monumental stupidity." After touring the Sany plant, Schlecht is convinced that what Sany is doing in China is "something we can only dream of," and that the takeover was the best thing that could have happened to Putzmeister. The Swabian native was also impressed by the Chinese facilities. "It was as clean as a whistle there," he says.

Back in Aichtal, people are more skeptical. The sale of such an important brand is "a disaster for industrial policy," says Sieghard Bender, the head of the local office of the IG Metall metalworkers' union in Esslingen near Stuttgart. He described the deal as a "Götterdämmerung" ("twilight of the gods"), a German expression that means the violent downfall of a system.

Indeed, the sale of the concrete pump maker marks a turning point. The Chinese are no longer just buying up nearly bankrupt consumer electronics manufacturers or second-class solar companies, as has been the case in recent years. Instead, they are now setting their sights on the "hidden champions," the low-profile global market leaders that are typical of German industry.

Putzmeister had, however, lost its global market leadership in recent years -- to Sany. The company made billions in the construction boom unleashed by China's communist leadership. Established in 1989 as a small manufacturer of welding materials, Sany employs 70,000 people worldwide today.

The Chinese company sells a broad range of machines that have German manufacturers shaking in their boots. Sany recently began making tunnel-drilling machines, a specialty of Herrenknecht, a mid-sized company from the town of Schwanau in southwestern Germany. Its founder, Martin Herrenknecht, is pursuing a different strategy than Putzmeister founder Schlecht. He has built a production plant in China to satisfy demand in the country. Last Friday, German Chancellor Angela Merkel and Chinese Premier Wen Jiabao visited Herrenknecht's plant in the southern Chinese city of Guangzhou, during Merkel's visit to China.

Sany's top sellers are still concrete pumps, articulated masts that are mounted on trucks and can pump liquid concrete through internal tubes to floors of buildings as high as 50 meters (165 feet) off the ground. When they are folded up, the telescopic rods look like a carpenter's folding rule, but when they are extended they resemble the legs of a giant spider. Sany sells almost 5,000 pumps a year, but almost exclusively in China. Putzmeister is the market leader in the rest of the world, although the Chinese company, known for copying Western technology, is gaining ground on the Aichtal inventors. "They've even painted their pumps with the same color we use," says a member of the works council.

The world became aware of the devices when they were used to pump water into the danger zone at Japan's devastated Fukushima nuclear power plant. But Putzmeister machines were not the only ones being used in Fukushima. Sany had also sent the Japanese one of its machines.

In contrast to the booming Chinese company, which even built a plant near Cologne in 2010, Putzmeister has recently faced tough times. When the market collapsed in 2008, sales plunged from €1 billion ($1.33 billion) to €440 million. "I've rarely experienced a business screeching to a halt in quite the same way," says CEO Norbert Scheuch. He was brought in to restructure the company, in response to pressure from the banks. "We were sitting on machine inventory worth close to €500 million."

Things are looking much better for Putzmeister today, but the medium-sized Swabian company is still on shaky ground. Besides, says Scheuch, most of its telescopic pumps can be copied "without infringing patents."

From Scheuch's perspective, Putzmeister needed a strong partner. This realization prompted him to quietly offer the company for sale, and in December he chose Sany as a prospective buyer. The Putzmeister founder, who had been skeptical until then, was summoned by Sany Chairman Liang, 55, to the luxury Schlosshotel Kronberg hotel in the Taunus Mountains near Frankfurt in the second week of January.

Liang, once a socialist model worker in a weapons factory, has turned himself into one of the richest men in China, with assets estimated at more than €7 billion. He is seen as a prototype of the new kind of capitalists, and demonstrates that power and money have long gone hand in hand in China. He is likely to become a member of the Communist Party's Central Committee this fall.

When Schlecht and Liang met for the first time in Germany, Schlecht was stunned when he received an oil portrait of himself as a gift from Liang. "You are my teacher," the Chinese businessman said flatteringly. Liang was clearly in a hurry to get the purchase agreement signed. The usual due diligence process was not necessary, he said, and he had no time for a plant inspection.

In the end, it was the money that convinced Schlecht. The takeover will cost Liang €525 million (including about €165 million in bank debt). "It exceeded everything we had hoped for," says Schlecht.

Blueprint for a New Strategy

The Putzmeister takeover could become a blueprint of a political strategy in which China uses German know-how to transform itself from a low-cost manufacturer into a high-tech economy. This was precisely what Premier Wen had in mind last year when he called for combining the technological strengths of German companies with the competitive advantages of the Chinese labor market. Putzmeister represents a breakthrough for this strategy.

In contrast, the previous efforts of the Chinese seemed relatively helpless. First they dismantled decommissioned power plants and shipped the parts to China to rebuild them there. Then they focused on buying up once-prestigious companies that were facing bankruptcy, paying a lot of money to learn bitter lessons from the purchases of hi-fi maker Schneider and regional jet manufacturer Fairchild Dornier. In the meantime, Asian investors have been focusing on individual sectors like the solar industry, in which they now have considerable influence in Germany through holdings and supply agreements.

Thanks to the Putzmeister takeover, the market for concrete pumps is falling into the hands of the Chinese. The Chinese are also very interested in Putzmeister competitor Schwing, based in the western German town of Herne, and they already own Milan-based Cifa. But because the key factor in the future growth markets of Asia, Africa and South America is not necessarily technological leadership but rather low-cost equipment, Putzmeister and Sany could even be a good fit.

"The two companies are a good match, and if the managers can get along we could see the first Chinese-German success story," wrote the respected German strategy expert Hermann Simon in a guest blog post for the Financial Times. Even Sieghard Bender, the union official, admits that the takeover makes sense from a technological standpoint. However, he wants the Chinese to provide a job guarantee until 2020, and he wants the founder to give his employees a share of the proceeds.

Because many companies conceal Chinese investment, for fear that it could damage their reputations, the amount of Chinese money now invested in German companies can only be estimated. Compared with the €20 billion in German investments in China, however, the amounts are still modest. But the standard pattern of copying and then liquidating now seems to be obsolete. On the contrary, managers from China have recently shown greater interest in Germany as a manufacturing location. For instance, Chinese money saved jobs at automotive supplier Saargummi, and the Chinese have even paid for the construction of research centers. Sany President Xiang Wenbo, Liang's right-hand man, says: "We're going to leave Putzmeister the way it is."

Xiang knows that the fascination for Chinese machines is not as great elsewhere as it is in his home country. Last week, worried representatives from an Arab construction machinery dealer already paid a visit to Putzmeister headquarters.

"China is no monster," Sany President Xiang says reassuringly. Nevertheless, he adds, the Germans will also have to get used to a "new Chinese style."