Porsche's situation is worse than was known so far. Banking sources say there's a "time bomb" ticking in Porsche's accounts in the form of options deals arranged to finance the VW takeover. 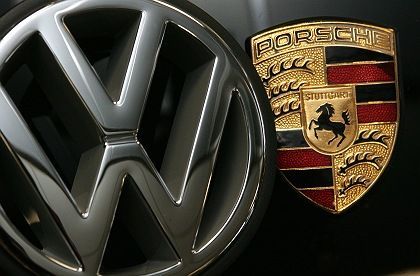 The emblems of VW and Porsche. Will the two carmakers merge?

They options had a nominal value of €57 billion as of July 31, 2008. But if Porsche were to allow the options to expire, the banks would sell VW stock, causing VW's share price to fall sharply. In that case Porsche would face billions of euros in writedowns and would fall into the red.

Porsche could extend the options contracts, but it would incur hundreds of millions of euros in fees if it does. The company can't maintain the contracts indefinitely. It arranged them to secure the takeover of 75 percent of VW shares. But the Porsche and Piech families that own Porsche now have to abandon the VW takeover plan as a result of high debts.

At a meeting last Wednesday, Wolfgang Porsche, the supervisory board chairman of Porsche, and Ferdinand Piech, his counterpart at VW, failed to agree on a way to reduce the debt burden.

Porsche CEO Wendelin Wiedeking and Chief Financial Officer Holger Härter presented a plan to merge Porsche with VW. The merged firm would then obtain fresh capital through a capital hike.

The Arab emirate of Qatar would acquire a stake in the company and become the third major shareholder alongside the German state of Lower Saxony and the Porsche and Piech families. But the families would also have to contribute several billion euros.

A rival concept favored by Piech sees the VW group acquiring Porsche's auto business. The Porsche holding company could reduce its debt with the proceeds from the sale. The Porsche and Piech families have set a new crisis meeting for May 6.