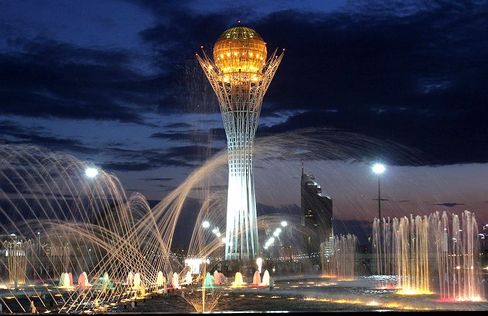 Central Astana is a futuristic mix of Las Vegas, Disney World and Dubai.

On the scorching, scrub-dotted steppe along the east coast of the Caspian Sea, a Chevron-led team is opening up the taps on 50 new wells at the supergiant Tengiz oil field. Fifteen years after snagging rights to the Kazakhstan field, the U.S. oil giant is at last doubling production to 540,000 barrels a day, its largest single source of oil in the world.

Tengiz is a prize, and Chevron has spent bundles to secure it. In the nearby city of Atyrau, the headquarters and logo of Chevron's joint venture dominate the skyline, while company townhouses in the city center include pools, a gym, and schools for the expat oilmen and their families. You would think Chevron's victory in this remote oil patch was complete.

Yet getting the oil out of the landlocked country has always been a tricky affair: Russia has blocked, stalled, and restricted the flow of Tengiz oil through its territory since the first day Chevron took over the field. Teaming up with the Kazakhs, Chevron has resorted to shipping some of its oil across the Caspian Sea to Baku, the capital of Azerbaijan, and then via pipeline and railroad to Georgia's Black Sea coast in an effort to avoid Russia. These days, Chevron does ship most of its oil through Russia, but for safety's sake it hopes to build a long, new pipeline across Georgia and export more through that route.

The plans for the corridor, though, were drawn before Russia's summer romp through Georgia. Suddenly, that tiny Caucasian state -- embraced by Washington in a bold plan to pry it away from Moscow's grip -- seems much less secure. The republics along the route and the companies working there are wearing their game faces, saying it's not clear the conflict in Georgia changed anything. Chevron regional vice-president Ian MacDonald says "it's too early to say" whether the Georgia events will cause transportation problems. But already Kazakhstan has canceled plans to build a refinery on the Georgian coast, and Big Oil is privately scrambling to assess how much of a setback its export plans have suffered.

The face-off with Moscow could affect not only Georgian sovereignty but also the energy business all the way from Kazakhstan to Western Europe. For the landlocked Caspian nations, it could become difficult or even impossible to secure the financing they need to expand the oil-and-gas corridor to the Georgian Black Sea. For Europe, which receives a full third of its natural gas and oil from Russia, the danger is that Moscow becomes far more demanding on political and economic issues. "There has been a decided shift in negotiating power," says Jonathan Simpson, a legal adviser on European gas pipeline deals with Russia. "This excursion has given [the Russians] a big stick at the table . . . . I don't see pressure from the U.S. having any impact at all."

Even before the Georgia mini-war, Russia was playing for keeps in the region. Starting in the 1990s, Russia often got its way by manipulating its oil and natural gas pipelines, which, despite the West's efforts, still dominate Caspian output. Russian pipelines ship more than 85 percent of the 6.3 million barrels of oil exported daily from the former Soviet Union. In its struggles with the republics, Russia has turned its spigots off and on repeatedly. In 1993, for instance, Moscow shut off Turkmenistan's gas exports to the West, forcing the Turkmen to sell at a lower price to Ukraine.

Kazakhstan has been the biggest prize of all. It didn't look that way in the Soviet Union's last days, when the flow of money from Moscow slowed considerably, and Kazakhstan had to take out a loan to feed its cattle. It had Tengiz, with at least 9 billion barrels of reserves, plus 13 billion-barrel Kashagan, the largest oil discovery anywhere in 40 years. Yet it was still hard to picture how a territory lacking a single private office building, in which the biggest business was importing Coke and whiskey, would become a petro-state.

Several deals and almost two decades later, Al-Farabi Street in the old capital of Almaty looks like a miniature version of Los Angeles' tony Wilshire Boulevard. Astana, the new capital, is a mix of Las Vegas, Disney World, and Dubai. The novi Kazakhi -- the oil-rich "new Kazakhs" -- hang out at Chocolate, the night club in the Radisson Hotel and the hottest spot in town.

President Nursultan Nazarbayev has thrown up a new, eye-popping center in another part of Astana, abutting the Ishim River. It's filled with first-class restaurants and hotels and features the Palace of Peace, a glass pyramid designed by architect Norman Foster, and Bayterek, a 318-foot-tall tower meant to represent a tree, topped by a giant gold ball. Inside the observation tower is Nazarbayev's handprint, a symbol of his role as a Peter the Great figure for the Kazakhs.

The country's ability to move forward relies almost entirely on oil. And oil's success depends on Kazakhstan's ability to export. But the overwhelming proximity of Russia makes the Kazakhs hesitant to challenge Moscow's will. Thus the ultra-cautious Nazarbayev has earned a reputation as a skillful balancer of Russia, China, and the U.S.

Yet Kazakhstan and its American partners have still clashed with Russia over the Tengiz field and the use of Russian pipelines to ship oil. Just before Chevron took over the field in 1993, Tengiz was producing 60,000 barrels a day. The company intended to boost that number more than tenfold. But the day the field changed hands from the Kazakhs to Chevron, Moscow ordered the U.S. company to cut the flow in half, citing a strain on the Russian pipeline being used and signs of environmental danger. Russia then stalled the construction of a new pipeline Chevron planned for the transport of Tengiz oil through Russian territory. Frustrated, Chevron turned to that expensive rail route in Georgia.

Eventually the Russians relented and helped Chevron build a 1,000-mile-long pipeline, terminating at Russia's Black Sea port of Novorossiysk. Yet the prolonged sparring with Russia slowed the growth of Kazakhstan's national income. Chevron thinks it eventually can produce nearly 1 million barrels a day at Tengiz. But that could be a decade away, and only if it can ship that volume -- a big if.

The problem is that Chevron wants to double its pipeline capacity through Russia so it can accommodate the increased flow from Tengiz. But Russia has said no, unless Chevron supports a new pipeline Moscow plans that would challenge a U.S.-backed pipeline in Azerbaijan, Georgia, and Turkey, which already is shipping oil. This new Russian route would reach the Mediterranean via Greece.

Initially Chevron refused. But then the company saw that expansion of its own pipeline in Russia could be stalled indefinitely, so it changed its mind. Now the Russians are ready to deal. "We are in favor of increasing the supplies of Kazakh oil," says Mikhail V. Barkov, vice-president of Transneft, Russia's state pipeline monopoly, which helps administer the pipeline Chevron uses. Still, the pipeline expansion Chevron wants so badly in Russia is now at least three years away. So Kazakhstan and Chevron are back to the railroads, an arduous and costly process that will ship some 300,000 barrels a day in 13,000 tanker cars through Ukraine and Georgia.

The Georgia warfare reminded everyone how fragile these networks are. A railroad bridge used for oil tanker cars was blown up, as were a number of oil cars. Some four-dozen Russian bombs fell next to Georgia's main pipeline, causing no damage but leaving huge craters. "Although all the basic transport routes through Georgia resumed operations, the image of the whole South Caucasian corridor has suffered," said Vagif Guseinov of Moscow's Institute of Strategic Studies & Analysis.

The countries and companies involved seem to see in the bombing a message aimed at those operating or using the Georgia rail and pipeline corridor. The corridor's risk profile has risen considerably, says Jonathan Wood, global issues analyst for Control Risks, a consultancy. Insurance for all oil operations, for instance, could rise. And Russia will become a tougher negotiator when it comes to the pipelines. There will be "some reevaluation of what Russia might do, what it is really able to do, what sort of political will it has," says Pavel K. Baev, a senior researcher at the International Peace Research Institute in Oslo. Adds Simpson, the British lawyer: "If you are sitting in Azerbaijan or Turkmenistan, you are more likely to accommodate Putin when he comes knocking."

What might Russia want? In June, Gazprom offered to buy every last cubic foot of the Azerbaijan government's natural gas production. Azerbaijan President Ilham Aliyev has so far resisted, mindful of the West's wish that he sell to Europe and lessen its dependence on Russian gas. Yet if he wants to expand the energy corridor through his country and Georgia, Aliyev might have to yield.

The Kazakhs remain optimistic, especially Timur Kulibayev. The Caspian equivalent of a prince, the 42-year-old son-in-law of the President is the nation's leading oilman. Kulibayev thinks the transit network through the Caucasus will be protected because so many countries use it, thus offering safety in numbers. "We haven't suffered any problems, and we don't expect any," he tells journalists in his Astana office.

Kulibayev also notes that next year China will finish a 400,000-barrel-a-day pipeline from Kazakhstan into its province of Xinjiang. If blockages to shipment through Russia and the Caucasus persist, China may be the only option for Kazakhstan's increased production. It would be ironic if after 15 years of struggle neither Russia nor the U.S. were to be the victor over Central Asia's oil and natural gas, and instead the spoils ended up going East.

With Jason Bush in Moscow, Mark Scott in London, and Dexter Roberts in Beijing.