German Chancellor Angela Merkel hasn't exactly been getting rave reviews from the German business community lately. Executives at corporations and industry groups gripe that the chancellor, who is head of the conservative Christian Democrats, has abandoned her program of reforms and is kowtowing to her coalition partners, the Social Democrats. They call her the "feel-good chancellor."

The captains of industry were, therefore, all the more pleasantly surprised when Merkel took up one of the corporate world's favorite issues at a recent meeting of the party's Economic Council. "I believe it is wrong to rush into shutting down our nuclear power plants," Merkel said to enthusiastic applause. "Whenever possible, we must reexamine the decision to abandon nuclear energy."

The reports of Merkel's latest shift had hardly been released before officials from both parties were presenting the subject as a hot campaign issue for the next federal election in 2009. CDU General Secretary Ronald Pofalla promptly defined nuclear energy as the "eco-energy of the CDU" and released an environmental position paper calling for Germany's nuclear power plants to remain in operation for longer than originally planned. The Social Democrats were just as prompt in opposing the conservative position. Members of the SPD parliamentary group said that apparently the CDU, and its Bavarian sister party, the CSU, had finally mutated "into a nuclear sect."

While oil prices climb to record highs and climate protection is fast becoming a top priority for the government, the coalition parties in Berlin are launching a new campaign of fear over nuclear energy. The SPD is evoking the memory of Chernobyl and Three-Mile Island to stir up antipathy against what it calls an unpopular "monster technology."

The CDU/CSU has also taken up a familiar tune -- that without nuclear energy the lights will soon go out in Germany.

However, while party strategists are animated by the issue, some energy experts fear the worst. In light of the climate crisis, they insist that the German nuclear consensus is in urgent need of review. Instead, an emerging election campaign over reactors threatens to deepen the divisions within the coalition even further. "It will only make things more rigid," warns Stephan Kohler, the head of the German Energy Agency (DENA), an organization subsidized by the federal government.

Of course, at the party headquarters such warnings by experts are filed under the category of "Unwanted Objections." The prospect of using the highly emotional nuclear issue to score points in the upcoming election campaign is far too tempting.

Nuclear Countdown Operational life and anticipated remaining period of operation* of Germany's nuclear power plants * according to the plan, agreed to under Gerhard Schröder's government, to phase out nuclear power

The CDU/CSU, for its part, hopes to back the SPD into a corner in the new debate over reactors. So far, the Social Democrats have lacked a convincing answer to the question of where Germany is supposed to get its electricity after the nuclear power plants are shut down. From coal power plants, which emit large amounts of climate-harming CO2 into the atmosphere? CDU leaders are convinced that the SPD is vulnerable on this issue.

With an unmistakable "Yes" to nuclear energy, Merkel also hopes to regain the aura of economic competency she lost with her many questionable compromises in other areas. Those who support inexpensively produced nuclear power are now attempting to draw a sharp distinction between themselves and the SPD's presumed candidate for chancellor, Foreign Minister Frank-Walter Steinmeier. In a past position as head of the Federal Chancellery, Steinmeier worked out the nuclear phase-out resolution together with then Environment Minister Jürgen Trittin, a Green Party member.

Oddly enough, the prospect of a new nuclear power campaign doesn't seem to trouble the Social Democrats in the least. On the contrary, the SPD sees the conflict as a welcome opportunity to energize its supporters.

According to recent internal surveys conducted at the party's Berlin headquarters, the overwhelming majority of SPD members strongly advocate a nuclear phase-out. Among SPD members, the nuclear phase-out ranks second, behind "social justice," on a scale rating the most important issues. 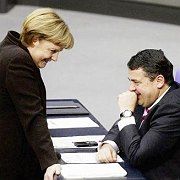 German Chancellor Angela Merkel and Environment Minister Sigmar Gabriel might be all smiles but they don't agree on Germany's nuclear energy policy.

Even now, hardly an SPD event goes by without party leaders preparing their own supporters for the upcoming dispute. Environment Minister Sigmar Gabriel has a stack of plans in his drawer designed to torment the nuclear industry, including higher taxes. In one internal document, Gabriel proposes charging a fuel element tax of 1 cent per kilowatt-hour in the future. This would constitute a significant part of production costs and make nuclear energy much more expensive. "The nuclear phase-out ended a deep social conflict in our country," says Gabriel. "Anyone who wants to reverse this is only reopening old wounds."

In fact, there are strong indications that both the CDU/CSU and the SPD will benefit equally from a heightened conflict over nuclear energy. However, the issue is likely to erect a much higher hurdle to any possible collaboration between the CDU and the anti-nuclear Green Party after the next parliamentary election.

It is also likely that a heated dispute over reactors will ultimately harm both industry and consumers. Experts are convinced that the nuclear concepts of both camps are poorly suited to cover future electricity needs in a way that is not harmful to the climate.

For instance, if the government adheres to the phase-out schedule initiated by the SPD and Green Party coalition of former Chancellor Gerhard Schröder, Germany will already be producing too little electricity by the next decade. Foreign electricity producers would benefit as the German economy became increasingly dependent on them.

On the other hand, if the CDU/CSU prevails with its plans to extend the operating life of nuclear power plants, significant excess capacity would be developed in Germany in the coming years, a study by the German Energy Agency concludes. This would most likely benefit domestic electric utilities, which would be able to fire up or shut down their reactors as needed, thereby shutting out any unwanted competition. It would cement the market power of major utilities like E.on and RWE, which the Merkel cabinet had in fact hoped to break up.

Because of these potential difficulties, experts have long supported a compromise model, in which older reactions would be shut down as planned, while newer ones would be kept running longer. This would not only cover electricity needs more effectively, but would also improve safety. Aging reactors, such as the boiling water reactor in the northern German town of Brunsbüttel, now almost four decades old, are considered especially prone to problems.

A consensus solutions is also required to solve another nuclear energy problem: the disposal of waste. No matter how much longer reactors remain in operation in the future, the government faces an urgent decision over the permanent storage of radioactive waste.

Current problems at the Asse nuclear waste dump in the northern state of Lower Saxony illustrate the fatal consequences of the failure to take appropriate steps to store radioactive waste. In the 1960s, nuclear strategists dreamed of building an exemplary permanent storage model in Asse.

Now, 750 meters (2,460 feet) below the surface, at the end of a long, dark tunnel, a section of the test facility for final storage is sealed off, because of radioactive contamination. Elsewhere in the storage facility, 12,000 liters of brine have been seeping in every day. If the brine is not pumped out, it will corrode the rock serving as a shell for the nuclear waste. One day, say researchers, the entire nuclear waste storage facility will sink, taking with it 89,000 tons of weakly to moderately radioactive waste, including 11 kilograms of plutonium.

The dispute now revolves around whether all of the radioactive waste should be brought back to the surface. The facility's operators propose leaving the waste where it is, encasing it with a "protective fluid" and hoping that all goes well. "There simply isn't enough time left for recovery before the storage facility collapses," says Heinz-Jörg Haury, a spokesman for the Helmholtz Center Munich, which operates the dump. The situation couldn't be more serious.

However, question of how to defuse the precarious situation in Asse is currently at the bottom of the CDU/CSU's and SPD's agenda. The politicians have more important things to do. The coalition parties have devoted themselves to discovering whether the problems began on the Christian Democrats' or the Social Democrats' watch.

This is a common pattern when it comes to the unresolved issue of what to do with reactor waste. In their coalition agreement, the CDU/CSU and the SPD had in fact pledged to determine jointly, once and for all, whether the Gorleben salt dome in Lower Saxony is in fact the best location for final storage. "People always said that only a grand coalition could solve the problem, but now we are observing a standstill in the administration of justice," says Wolfram König, the head of the Federal Office for Radiation Protection. Almost nothing has happened so far, however. Bavaria and Baden-Württemberg, two states heavily invested in nuclear energy, and where especially large numbers of reactors are already in operation, have successfully torpedoed any search for alternatives in recent years.

The positions are now hopelessly bogged down. Gabriel is adamant about starting a new search for sites, while the CDU/CSU wants to see everything remain as it is. The prospects of a compromise are minimal, especially with coalition members who prefer to berate each other. "Describing nuclear energy as eco-energy," says the environment minister, "is a good joke."