Hardly a day seems to pass in Germany without yet another indication that the economy is in for a difficult year. Economics Minister Michael Glos was just the most recent to provide yet more grist for negative headlines. Speaking before German parliament on Thursday, Glos said Germany is in its worst recession in its post-war history. 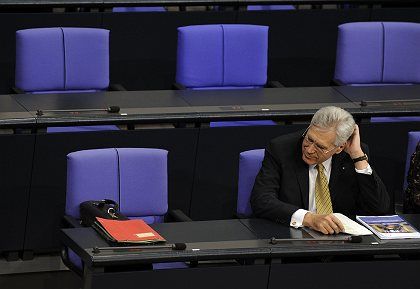 Still, he emphasized, "we don't have a catastrophe -- but we do have difficult economic times." His forecast for the rest of the year even allowed a bit of optimism to creep in. "We are foreseeing an improvement by the middle of the year," he said on Wednesday. He added that Axel Weber, president of the Bundesbank, had already outlined an even more optimistic forecast to the Berlin cabinet.

Nevertheless, even if 2009 were to see a return to postive growth, Germany would still not avert a serious recession this year. Offical forecasts of steady growth every quarter between April and December will not be enough to offset the steep decline in late 2008 and early 2009. Berlin announced on Wednesday that it forecast gross domestic product shrinking by 2.25 percent for the whole year -- forming a gloomy contrast with last October's estimation for annual growth of 1.2 per cent this year.

Speaking to the media on Wednesday, Glos said "we have profited greatly from upswings in the world economy and obviously, when things go the other way, we are an economy that is particularly affected."

He added that the current downturn posed one the "greatest challenges" since unification in 1990. Testament to the severity of the downturn, half a million more people are expected to lose their jobs in 2009 -- a theme that is likely to form the backbone of political campaigning in the run up to the general election on September 27.

Germany, which makes up about a third of economic output among those countries belonging to the single currency, the euro, could see a return to positive growth as early as April and keep growing for the remainder of the year, the government said.

But economists also warn that the onset of economic stabilization will not represent an overnight change of fortunes. "The end of the recession doesn't mean an end to this painful period," Commerzbank chief economist Jörg Krämer told SPIEGEL ONLINE. "I expect the German economy will stop shrinking in the summer but it will show very slow growth for a year from mid-2009. There will be no strong upswing."

Similar predictions are gaining ground for Europe as a whole. On Monday, the European Commission forecast the 27-nation EU economy would shrink 1.8 percent this year but that it would grow 0.5 percent in 2010.

Germany has yet to provide a forecast for 2010, but exports, the lynch pin of the German economy, have put the country on the firing line as the global economy has stalled. As Glos put it: "Germany is integrated into the global economy like hardly any other industrialized country."

But while exports rendered Germany vulnerable to the economic storm, they also mean it could profit from extensive fiscal packages implemented oversees. Most of German trade abroad is within Europe, where economic packages of historic proportions aim to rekindle consumer confidence. That, Glos said, will help lift demand for German products like cars -- which in turn will improve the outlook for the estimated one in five Germans working in the auto industry.

And the government said that Germany's downturn would be softened by the €50 billion ($65 billion) fiscal package unveiled last week by Chancellor Angela Merkel's government. The long-awaited move followed international complaints about Germany's tardy response to the crisis, including personal criticism of the Chancellor, who earned herself the unflattering nickname "Timid Angela." But the measures, which include hefty investment in roads, railways, schools and hospitals, were predicted to cushion the economic slowdown this year. Without the government's fiscal package, the economy would contract by more than 3 percent in 2009, the government said.

And more intervention is in sight. On Thursday, the Handelsblatt newspaper reported that the German government is drawing up a new rescue plan for the country's floundering banks, a bid to help them cleanse their books of hundreds of billions of euros worth of bad assets. The so-called "Bad Bank Light" plan under discussion would mean the state assumes bad assets from the banks but would also get a claim on future gains. A similar model had been successfully employed with East German banks after German reunification in 1990, the paper wrote.

The new lifeline for banks reflects a growing consensus that last October's €500 billion ($650 billion) rescue package to remedy the ailing sector has been something less than a resounding success.

And speculation about new plans came amid uncertainty about the running of Soffin, as the bank rescue fund is known, after the head of the committee resigned -- the second top official to leave the government-backed agency set up in October. The Finance Ministry said in a statement on Wednesday that Günther Merl would leave his job at the end of January "for personal reasons." German media said Merl had resigned due to differences of opinions about how to lead the fund.