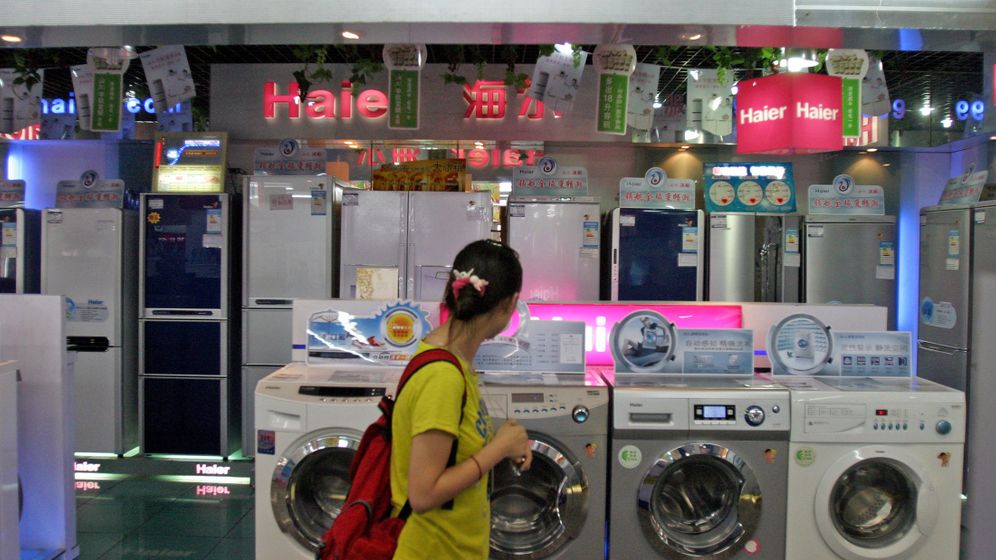 The name Haier, a leading Chinese brand for household goods, originates from Liebherr, the German company that set up a joint venture with a Chinese company almost three decades ago. Liebherr taught its partner to build modern fridges. It needed to, because 20 percent of the Chinese manufacturer's output at the time was faulty.

Haier boss Zhang Ruimin started out by handing his surprised workers sledgehammers to destroy all the malfunctioning fridges they had made. The shock therapy worked. The state-owned business started to expand its market share in China, where it acquired many smaller competitors. Then it went international, and now it has an 8 percent share of the world market for household appliances.

The Chinese brand (its advertising slogan is "Haier and Higher") is well established in Germany as well. The group has a research center in Nuremberg that develops dishwashers for the European market. It bought a fridge factory from Meneghetti in Italy and is building a plant in Poland -- due to go into operation in June -- in cooperation with a partner. Haier has achieved what many companies from emerging economies aim to do: The company from the eastern Chinese city of Qingdao has established itself as a global consumer brand. It has become a serious competitor for Western companies, even in their home markets.

"If a country has no global brand, it can't be on top," says Haier boss Zhang, inspiring other Chinese CEOs to follow his example.

The Far-Eastern firms have a major advantage: established competitors in the West usually don't take them seriously, in some cases until it's too late. Indian market expert Nirmalya Kumar warns that German firms must take care or they might find themselves as overwhelmed as they were by the assault by Japanese camera manufacturers decades ago.

"Chinese companies are growing more self-confident and are intensively pursuing the goal of establishing their brands in other countries," said the Munich Technical University in a recent study of "Chinese Champions." Chinese firms already produce high tech products that meet the highest standards, the study says.

There are many such firms on the world market now, the best known being computer maker Lenovo, which acquired the PC division of US group IBM in 2005. Lenovo is rapidly expanding its product range and aims to be perceived not as a Chinese, but as a global brand.

The Chinese government is encouraging the expansion of its companies because it wants to shed the country's image as a cheap, low-tech manufacturing location and to turn it into a center of innovation. "Zou chu qu," loosely translated as "go out," is the message the country's Communist planners are sending to the Chinese business community.

Unlike many Chinese firms, Haier didn't start its international offensive in other emerging economies, but in the US and Europe. It first targeted niche markets neglected by Western manufaturers, like mini fridges and wine coolers.

Haier has quadrupled its worldwide sales to $26 billion since 2000, and its net profit has risen six-fold to $1.4 billion.

The firms need Western know-how to expand. Haier had Liebherr, while Pearl River Piano, now the world's biggest piano maker, had Yamaha. Half a century ago the company from the southern Chinese city of Guangzhou made just four pianos a month. Now it's 100,000. The company has a 15 percent market share in Europe. That was thanks to Yamaha. The Chinese entered a joint venture with the Japanese brand 20 years ago, and once they had accumulated enough knowhow, they dissolved the partnership. In 2000 they pushed their way onto the US market with low-cost pianos. Their instruments were around a third cheaper than Yamaha models.

But Pearl River Piano has been shedding its budget image. In 2005, it entered a cooperation with Steinway & Sons and now builds Essex brand pianos in Guangzhou for the premium American manufacturer.

In Germany, it bought the marketing rights of competitor Rittmüller and poached local piano builders.

Germany is an important focus of the Chinese offensive because it has scores of medium-sized businesses with valuable knowhow. Sany Group, the world's biggest construction machinery maker, bought German concrete pump builder Putzmeister for €525 million in 2012.

The next aim is to build world-class cars. But the Chinese first need to work on the quality of their vehicles. They have already selected a German teacher: Daimler recently took a stake in BAIC, the car division of Beijing Automotive Group. There is much speculation in China about BAIC returning the favor by purchasing a stake in the German luxury automaker.