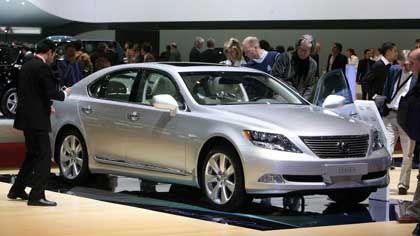 The first defeat was bad enough. It amounted to a collective recognition by executives at German car companies that they had misjudged the situation. More than two years ago they made a decision, a first in the history of the German automotive industry, to emulate the Japanese and build hybrid automobiles.

The issue could no longer be ignored. The savings that can be achieved with the hybrid gasoline and electric engine are simply too substantial. Porsche CEO Wendelin Wiedeking experienced the second setback more directly. Wiedeking wanted the best hybrid engine for his company's gas-guzzling Cayenne SUV, and he wanted it as quickly as possible. His first move was to contact Toyota, the pioneer in hybrid technology.

The Japanese told Wiedeking that they could help him, but only by providing the full package -- in other words, the platform for the entire vehicle. The Japanese insisted that merely buying the individual components, as Wiedeking had envisioned, made no sense. The Asians politely advised the Porsche boss not to underestimate the complexity of hybrid engines. Wiedeking's talks with Toyota quickly came to an end.

Today Porsche's engineers know that the Toyota executives were by no means trying to make fools of them two years ago. The engineers discovered first hand just how sincere the Japanese had actually been when they set out to develop, in a joint effort with Volkswagen, a hybrid engine at Volkswagen's research center in the town of Isenbüttel near VW's Wolfsburg headquarters. But the project failed to progress as smoothly as the Germans had expected.

German hybrids by "end of decade"

The original plan was to introduce hybrid versions of three SUVs: the VW Touareg, Audi Q7 and Porsche Cayenne. But that deadline has now proved to be unrealistic. VW will unveil its first hybrids next year, but they will not be available for sale by then. Wolfgang Dürheimer, who heads the research and development division at Porsche, has revised the predicted rollout to a vague-sounding "end of the decade."

The company has barely managed to come up with prototypes of the first construction stage, which suggests that actual production would not begin for at least another two years. System supplier Bosch has developed a power supply unit that can handle high-voltage current of up to 300 ampere, but it takes up most of the trunk. "Of course, it still leaves much to be desired," says Dürheimer, promising that the size of the wiring system will soon be reduced.

The biggest problem lies in the relatively crude drive train the German engineers have chosen. While Toyota uses a complicated engine-gearbox combination with two electric power units, the VW/Porsche system features only one electric motor between the internal combustion engine and the gearbox. This motor has to serve multiple purposes: acting as a generator and supplying the braking energy to the battery, powering the vehicle on its own when only the electric motor is operating and serving as a starter for the combustion engine. These processes are controlled by two automatic clutches.

The most difficult part of the system is achieving a smooth transition from pure electric mode to combined combustion engine and electric mode. The prototypes are still plagued by unappealing hiccups.

Eliminating this weakness could become a matter of destiny for this type of hybrid, to which the Volkswagen Group has fully committed itself. The system will also be offered for the Golf class, but a little farther down the road, because hybrid development at VW was put on ice until Martin Winterkorn took the helm as the company's new CEO.

DaimlerChrysler and BMW are leery of the more economical solution and, in a joint effort with General Motors in the United States, are developing a more complex full hybrid system. Though based on the Toyota model, the system's more ambitious mechanics will allow it achieve even lower fuel consumption.

But the gear train is extremely costly and will initially be used only in heavy SUVs.

The two competing German companies have also joined forces to create hybrid engines for their flagship 7 series (BMW) and S class (Mercedes). At first only a "mild" hybrid drive will be used in which the electric motor merely supports the combustion engine and never propels the vehicle on its own.

This less costly system produces almost the same reduction in consumption as a full hybrid, in which a lack of battery capacity prevents the more powerful electric motor from ever operating at its full potential. The only argument against the "hybrid-lite" solution stems from marketing experience. Honda has been selling cars based on this system for years, and yet the company is not perceived as a true hybrid manufacturer. The important factor missing in cars that are incapable of running purely on electric power? The wow effect.

But Mercedes does plan to attract attention in the industry with a breakthrough in battery technology. In early 2009, the mild hybrid S class will be one of the world's first mass-production automobiles equipped with lithium ion batteries.

This extremely efficient type of battery is already being used successfully to power mobile phones, but it is difficult to control at sizes required for cars. Even the Japanese are nervous about using lithium ion batteries. The supplier of the batteries for the S class will be French battery maker Saft, a company with experience mainly in the aerospace and defense industries.

Meanwhile Varta, a Hanover-based institution in the battery-making business, is trying desperately to keep up. Even German carmakers are buying nickel metal hydride batteries, currently the standard in hybrid automobiles, elsewhere. VW buys its batteries in Japan, from Honda supplier Sanyo.