Let's pretend it's the summer of 2021. German Chancellor Ursula von der Leyen is hoping for a quiet campaign and an easy victory in national elections for her conservative Christian Democrats and their coalition partner, the Green Party. But then a bomb drops. Due to misguided speculation on offshore wind parks, Deutsche HypoCommerz -- an institution created through a series of mega mergers of Deutsche Bank, HypoVereinsbank and Commerzbank that has become Europe's largest lending bank -- is in trouble.

For the first time, new bank crisis rules -- agreed to eight years earlier in a late-night meeting of EU finance ministers -- have to be applied. Systemically relevant Deutsche HypoCommerz has to be wound down. Bank shareholders lose all their capital as do bondholders. Because that money together isn't enough to cover the major bank's liabilities, customers with deposits of more than €100,000 ($130,000) are also forced to cough up.

Taxpayers Can Breathe Easy -- In Theory

In practice, however, things look different. Banking industry lobbyists and economists alike warn in unison of the terrible consequences a winding down of Deutsche HypoCommerz would have on the European economy. The president of the German banking association also warns of a "crisis of confidence," of the threat of "capital flight out of the euro zone" and of a resulting credit crunch that "could hit Germany's small- and mid-sized companies, with its millions of employees, especially hard."

In the New York Times, Paul Krugman grouses at Europe for sticking naively to principles instead of living up to its responsibility at a time when the global economy is teetering on the abyss. Meanwhile, the governor of the state of Hesse, warns of the "enormous importance of Deutsche HypoCommerz for Frankfurt as a financial capital."

Von der Leyen begins to worry about what she once thought was a sure-fire re-election.

When two major banks in France and Britain fall into similar difficulties soon after, an exception to the rules is made at a specially convened EU summit. EU member-states assume the liabilities for the majority of the offshore junk bonds from the balance sheets of their banks and transfer them to a bad bank. At the same time, Deutsche HypoCommerz is recapitalized with a silent investment by the German government. Shareholders, creditors and major customers remain untouched.

In a night time press conference, von der Leyen notes that "not a single euro of taxpayer money" has been lost. After all, she says, interest payments will be applied to the quiet investment "as soon as Deutsche HypoCommerz is profitable again." She also says the Bad Bank will have good chances of generating profits with the credit derivatives "as soon as the market for these securities has recovered."

Responding to questions by journalists, von der Leyen gives a testy reply: In no way, she says, does the deal represent any reversal of the principal of bail-ins. "Risk and liability must always be viewed in the market economy as two sides of one coin," she says.

Back to the present. Here's what the fictional episode shows: According to the rules that the EU member states drew up in the early morning of June 27, 2013, for dealing with the next banking crisis, just about anything goes. It is unacceptable that taxpayers have to answer for the faulty speculation of the banks -- at least not before shareholders and creditors have lost their money. And those who entrust their savings to a bank, at least over a certain sum, have a duty to inform themselves about that bank's business practices.

The EU pursued this course for the first time with the Cyprus crisis. And now, at Germany's urging, it is likely to become the rule for all major European banks.

But the problem lies in the word, "rule." Financial markets, politicians and citizens have long become accustomed to the EU countries following their self-imposed rules for only as long as they suit them. The Maastricht criteria were forgotten as soon as Germany wanted to borrow more money than it was allowed. And how about the ban on sharing debt liability across the currency union? That was history the moment the union began to fear the consequences of a Greek default. The list goes on and on.

The test for the new banking rules, as well, will not be passed until they are applied to a major bank in the heart of the EU -- not in Cyprus, but in London, Paris or Frankfurt. And even then, they will have to be pushed forward against tremendous pressure from the banking lobby, and despite all the economic risks. Experience to date does not suggest that this will ever happen. 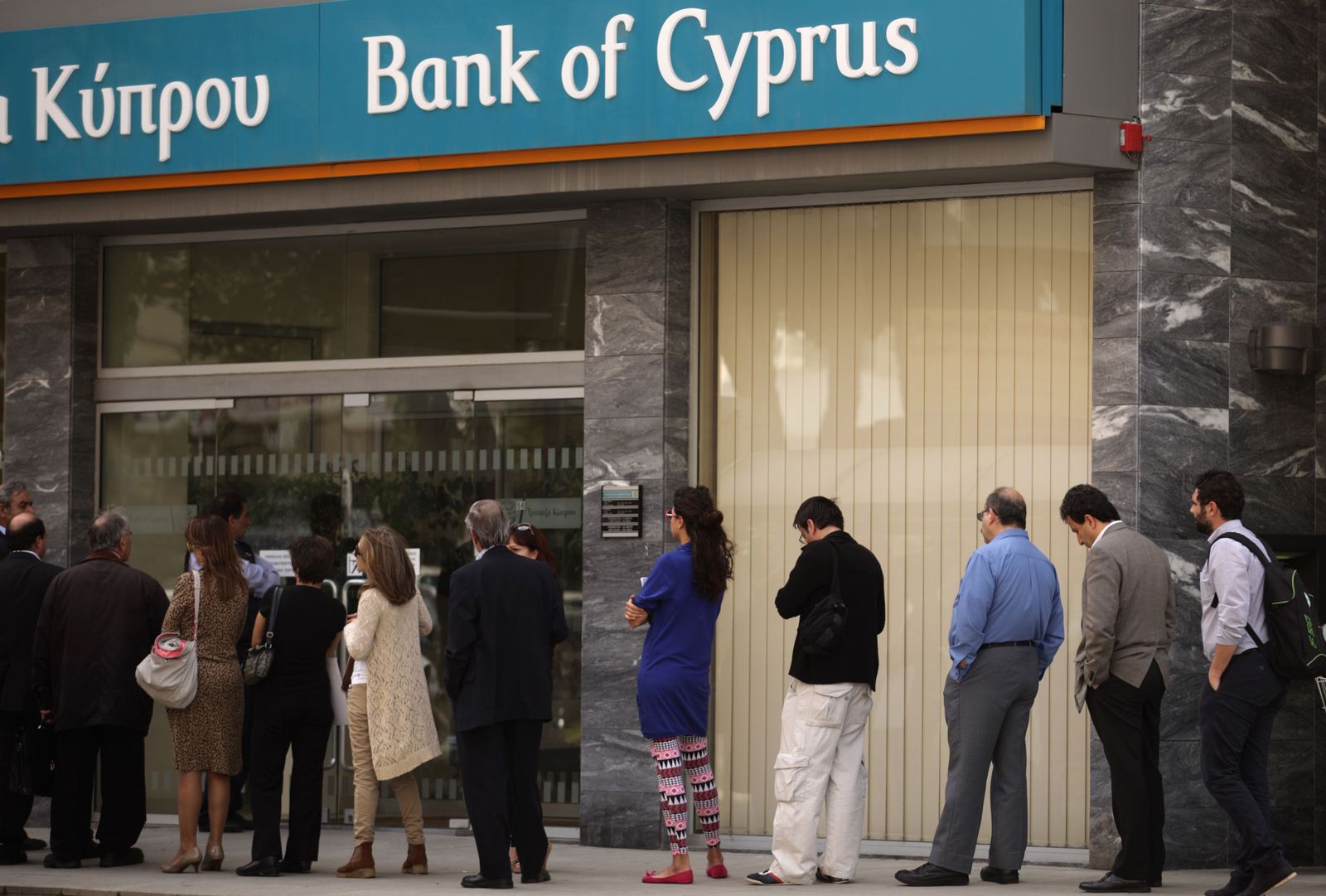 People queue up outside a bank in Nicosia: The bail-in seen in Cyprus will now be the standard for Europe.