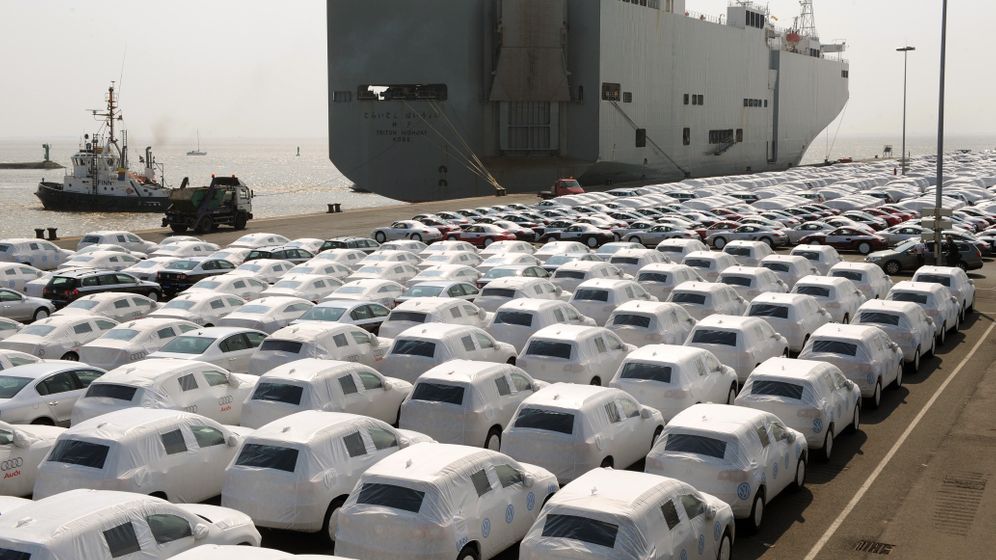 Photo Gallery: Is Germany Too Focused on Exports?

Marco Buti, the most senior member of EU Monetary Affairs Commissioner Olli Rehn's staff, isn't exactly viewed as a friend of Germany in Brussels. The chief economist of the European Commission, a native of Italy, has a tendency to blame many euro-zone ills on the nature and effects of German economic policy.

Sometimes he is troubled by austerity dictates from Berlin meant to clean up the finances of crisis-ridden countries. And sometimes he feels that Germany is too stingy because it's unwilling to spend more to jump-start the economy.

Buti is especially irked by the imbalances within the euro zone. In his view of the world, countries like Germany are partly responsible for the turbulence in southern countries because they flood them with goods.

Buti will have yet another opportunity to call the Germans to order next week when, on Nov. 15, the European Commission releases its early warning report. The report identifies those countries whose deficit or surplus is particularly large in relation to economic output.

Germany will be among those at the top of the list. If the European Commission sees this as a problem, it can subject the country to an "in-depth analysis," which could be followed by a reprimand. The office in charge of the procedure is Buti's Directorate-General for Economic and Financial Affairs.

An old debate is returning with a vengeance. The German government has been pilloried for years because Germany's exports allegedly disrupt global economic peace. The complaint was voiced by Christine Lagarde, then France's finance minister but now head of the International Monetary Fund (IMF), as well as a long line of US Treasury secretaries. Current Treasury Secretary Jacob Lew took the same line only last week. According to a report from his department, Germany was identified as a top threat, even ahead of China.

The charge is always the same: The Germans have acquired an unreasonable advantage by one-sidedly focusing on exports, and now they are flooding foreign markets with their products. At the same time, this view holds that the Germans live and consume below their means, which is detrimental to foreign companies because there is less demand for their products in Germany.

At first glance, the numbers seem to prove the critics right. Last year, Germany's export surplus amounted to 7 percent of annual economic output. It is expected to be about the same this year and only slightly lower next year. This forces the European Commission to intervene because the average value over the course of three years cannot exceed 6 percent.

The only question is: Whose fault is it?

German government representatives turn the argument around, saying that the problems in Southern Europe are not Germany's fault. On the contrary, says Berlin, countries like Greece, Italy and Spain have only themselves to blame for their troubles because they spent years living beyond their means and at the expense of their own competitiveness.

This explains the harsh rejection of worldwide criticism by German Finance Minister Wolfgang Schäuble, a member of Chancellor Angela Merkel's center-right Christian Democratic Union (CDU). According to a Finance Ministry memo, "The German current account surplus offers no reason for concern for Germany, the euro zone or the world economy." Berlin is pursuing a course of "growth-friendly consolidation," the memo to Schäuble continues, and there are no imbalances "that would require a correction of our economic and fiscal policy."

In their expert opinion, the Finance Ministry officials note that the German current account surplus relative to those of euro-zone partner countries was cut in half between 2007 and 2012, from 4.4 to 2.2 percent. By comparison, trade surpluses with the United States and other world regions grew. The euro zone's foreign trade balance is generally balanced. Indeed, Schäuble's experts believe they deserve praise for this rather than rebuke.

But that is unlikely to happen. When IMF First Deputy Managing Director David Lipton met with German Finance Ministry officials last week, he proposed that Germany make a commitment to reduce its current account surplus. He also wanted the German government to set a fixed target that could not be exceeded in the future.

For Finance Ministry officials, this approaches the sort of hubris one would expect from a planned economy. They also like to point out that there isn't much they can do about the surpluses because they simply lack the necessary leverage. No one in the world is being forced to buy German cars or machines, they note, so should the German government ban exporting? "This is the sort of thing that didn't even work under socialism," says one official.

Suggestions that the Germans stimulate imports are no less unrealistic as the government also lacks important tools to influence them. Germans will buy more foreign goods if they earn more money. But this isn't something the government can dictate since, in Germany, employers and trade unions negotiate wage levels without any government interference.

Besides, the trend has already been going in the right direction for some time. "Germany exhibits robust wage growth," reads the Finance Ministry document. This has led to higher consumption of growth drivers, it continues, which also benefits the economies of partner countries. In addition, companies are investing more, which strengthens the supplier industry in the euro zone.

Moreover, the new grand coalition currently being negotiated by the CDU, its Bavarian sister party, the Christian Social Union (CSU), and the Social Democratic Party (SPD) has already agreed to increase both government investment and the minimum wage. Both stimulate domestic demand, which should put critics at least somewhat at ease.

Politicians in Berlin and scholars alike wonder whether criticism of the special German business model is justified. Should Germany have to be punished for having such a successful export economy?

"That would be absurd," says economist Holger Görg, a professor at the Kiel Institute for the World Economy (IFW), in northern Germany. After all, Görg argues, no one can be forbidden from buying German goods. Germany was still a problem child in the 1990s, he explains, but then it regained its strength. "Should that be held against the country today?" Görg asks incredulously. The real issue, he says, is why countries like Spain or Italy haven't managed to become more competitive.

The crisis-ridden countries can also thoroughly benefit when German exports are flourishing. Products from other countries, often from deficit countries, can be found in almost every car, machine and chemical product with the "Made in Germany" label.

According to a study by Munich-based Ifo economic think tank, the share of these inputs in German exports rose from 13.5 percent in 1995 to 20 percent in 2008. Compared with their foreign competitors, German companies even exported a disproportionately high share of these inputs, a new study by the IFW concludes. Relatively many components come from Central and Eastern Europe. Their share of German industry is almost three times as high as in Spain, France or Italy. BMW, for example, sources almost half of the parts for cars built in Germany from abroad.

In addition, German companies create growth and jobs in other countries with their overseas plants. Volkswagen, with its manufacturing facility in Portugal, is the country's largest foreign investor. At the BMW plant in Spartanburg, South Carolina, about 7,000 employees produce almost 280,000 vehicles each year, two-thirds of which are sold abroad.

The German economy's export orientation has developed over the generations and wouldn't be as easy to alter as the critics would like. Highly specialized family-owned businesses have matured into global players that generate a large share of their sales and profits abroad. This explains why industry accounts for a relatively large 22 percent of the German economy.

Eurocrats in Brussels contradict the impression that Germany's surpluses are already a case for prejudgment. "We are only at the beginning of the process," says a Commission expert. He notes that surpluses are not generally a reason for concern, and that the Brussels agency is aware that Germany must remain the Continent's engine of growth. Although there has long been a push for more domestic demand, says the expert, there are certainly positive signs emerging in this regard.

This is just what Schäuble and his officials like to hear. "Fortunately," says a senior official, "there are people besides Marco Buti."