In a report on global financial stability released on Wednesday, just days before an IMF meeting that will bring together the world's finance ministers in Tokyo, the Washington-based institution has called on European countries to move swiftly to implement a pan-euro zone banking oversight regime and other measures aimed at preventing a recession and restoring market confidence.

"Commitment to a clear roadmap on a banking union and fiscal integration are needed to restore confidence, reverse the capital flight and reintegrate the euro area," said José Viñals, the head of the IMF's monetary and capital markets department. "Despite many important steps already taken by policymakers, this agenda remains critically incomplete, exposing the euro area to a downward spiral of capital flight, break-up fears and economic decline," the IMF said in its report.

Faltering market confidence has led to capital flight from countries on the periphery to the core of the euro zone, the IMF stated. This is leading to higher borrowing costs and a "growing wedge between the economic and financial 'haves' and 'have nots'."

The IMF warned that unless additional, decisive policy measures are taken "urgently," mounting pressure on banks could result in "asset shrinkage by as much as $2.8 trillion to $4.5 trillion" through the end of 2013.

The warning shot from the IMF comes in the midst of a heated debate over the form a future pan-European banking supervisory authority should take. The establishment of the authority is considered to be an important step toward creating a true European banking union. Currently, Germany and the European Commission are bickering over those plans, which German Finance Minister Wolfgang Schäuble believes are poorly conceived. Schäuble, a member of Chancellor Angela Merkel's conservative Christian Democratic Union (CDU) party, has also expressed doubts about the planned start date of January 2013, which he has described as overly ambitious. Some have said it could take months or longer before an agreement is reached.

The European Commission foresees a key role for the European Central Bank in monitoring European banks, but Schäuble has warned of conflicts of interest at the ECB, which is responsible for both monetary policy and interest rate decisions. But the start date for a common supervisory authority for banks operating within the common currency zone is important, because it is considered to be a prerequisite for providing direct aid from the euro bailout funds to troubled banks, including those of Spain that have been particularly afflicted by the crisis.

Germany is also at odds with France, which would like to see all 6,000 financial institutions in the euro zone be monitored by the ECB. Berlin, however, believes that a regime which keeps an eye just on "systemically important" banks would be sufficient.

In its report on Wednesday, the IMF also warned of a potential credit crunch in Europe. The report warns that a rapid contraction of bank balance sheets could cause lending by these institutions to decline by 4.5 percent by the end of 2013. The report warns that in a worst-case scenario, if only "weak policies" were pursued, that rapid bank deleveraging could lead to a contraction of GDP as high as 4 percent of the periphery euro-zone countries and 1.5 percent at the core. "It is important that Europe as a whole … that there be regional efforts to support the recapitalization of banks," David Lipton, the IMF's first deputy managing editor, told Reuters.

In addition to the euro-zone crisis, IMF officials are also concerned about the threat of high national debt in the United States and Japan, which it claims is eroding market confidence. On Tuesday, the IMF had already warned of the threat of a global recession -- a forecast attributed to both the euro crisis and American fiscal policies. The IMF said it was unable to see how the US would manage to deal with its major budget problems in the medium term. In the short term, the IMF warned, the United States presents a threat to the global economy.

The IMF also forecasts slow growth for the global economy in the report. It is expecting growth of 3.3 percent in 2012, following by an increase of 3.6 percent in 2013 -- 0.2 percent and 0.3 lower, respectively, than the IMF's previous forecast in July. The IMF also trimmed its 2013 growth forecast for Germany by 0.5 percentage points to 0.9 percent. 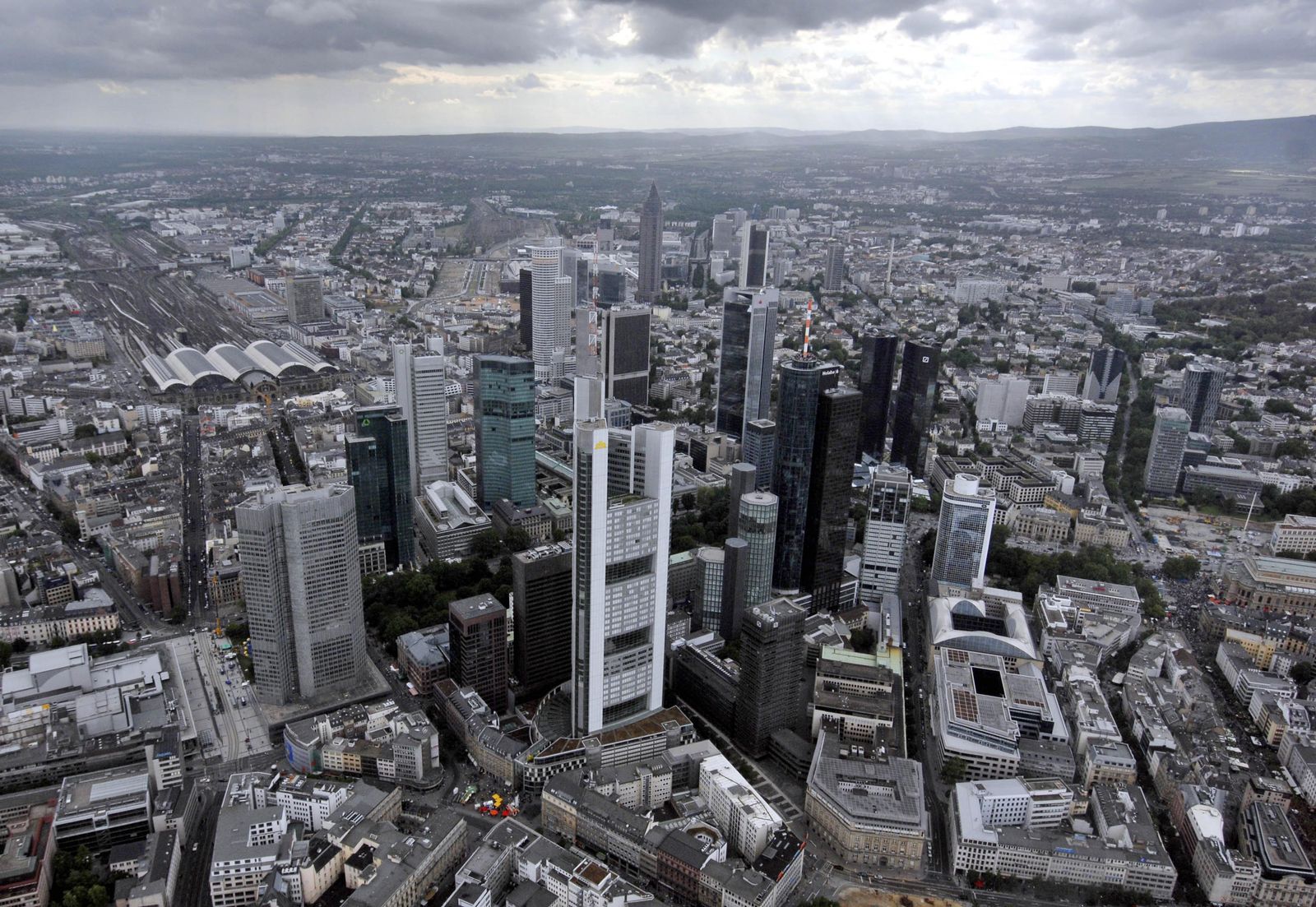 The skyline of German financial center Frankfurt: "Commitment to a clear roadmap on a banking union and fiscal integration are needed to restore confidence," warns the IMF.