The two meetings were strictly confidential. They were not marked on anyone's schedule, none of the attendees was permitted to take notes, and there were no minutes available once they were finished. Jürgen Rüttgers, the governor of the state of North Rhine-Westphalia, and Roland Koch, his counterpart from the state of Hesse, had only brought along their planning directors. No one was to have the opportunity to sabotage the plan the two men eventually fleshed out. 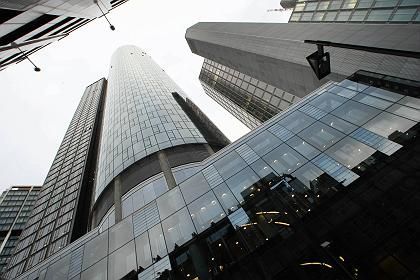 In the end the two governors, both Christian Democrats, shook hands to seal their agreement to approve a merger of their respective state-owned banks, WestLB and Landesbank Hessen-Thüringen (Helaba). Koch promised Rüttgers that he would stand behind the agreement, even if it ended up being a thorn in his side in the current election campaign.

Both men know that the beleaguered WestLB is no longer the central issue. Nothing less than the future of the entire public banking system in Germany is on the line. Under the agreement, the two banks pledged to support each other financially, which essentially means that if one bank is at risk the other bank will bail it out.

But if a number of these state-owned banks run into financial difficulties, it could jeopardize the entire system. Although this scenario was considered extremely unlikely until now, the American subprime mortgage crisis has done more than just upset worldwide financial systems. It has also mercilessly exposed the weaknesses of state-owned banks in Germany.

The most spectacular losses in this crisis have been limited primarily to non-German financial institutions until now. For instance, Citigroup, one of the world's largest banks, has already been forced to write off $17.5 billion (€12.2 billion) in bad debt. Merrill Lynch and Morgan Stanley have had to take write-offs of $8.4 billion and $2.4 billion, respectively. Last week the prominent Swiss bank UBS added another €10 billion to its existing write-offs.

The world's key central banks did what they could to help ease the crisis. In a concerted move, European Central Bank President Jean-Claude Trichet and US Federal Reserve Chairman Ben Bernanke injected fresh, low-interest cash into the credit markets to avoid liquidity shortfalls. But this effort only helps offset the banks' most serious problems, while at the same time making it clear that the situation is precarious. Germany, and especially its state-owned banks, has been especially hard-hit.

Last week the relevant officials launched a desperate attempt to save another ailing state-owned bank, SachsenLB. Incompetent and overstressed managers had driven the bank to the brink of ruin with irresponsible investments running into the billions.

SachsenLB's struggle to survive began two Saturdays ago in the eastern German city of Dresden. Siegfried Jaschinski, the head of the state-owned bank Landesbank Baden-Württemberg (LBBW), attempted to cash in on the bank's woes. After its risk ratings had mushroomed almost weekly, Jaschinski demanded that the state of Saxony provide loan guarantees for at least €4.3 billion. Otherwise, he said, LBBW would pull out of a deal to acquire SachsenLB.

But Stanislaw Tillich, the finance minister for the state of Saxony, refused at first to furnish Stuttgart-based LBBW with more than €1 billion in guarantees. Tillich reiterated his position on Monday in a second round of negotiations in the offices of Jochen Sanio, the president of the German Federal Financial Services Authority (BaFin). But Jaschinski's team refused to back down from its demand for the higher amount of €4.3 billion.

Sanio concluded the negotiations by setting an ultimatum: Unless he was presented with a solution by the weekend, he would shut down SachsenLB.

The final marathon round of negotiations took place last Wednesday at BaFin's Frankfurt offices, where the state government and bank executives haggled until the early morning hours. Sanio and Axel Weber, the head of the German Central Bank, the Bundesbank, moderated the negotiations.

Georg Milbradt, the Christian Democrat governor of Saxony, joined the group at midnight, and an agreement was fleshed out in the late-night session at roughly 3:15 a.m. The state of Saxony agreed to provide guarantees of up to €2.75 billion as security against losses. To circumvent the state parliament in Saxony, the guarantee will be broken down into two payments. Reducing the individual sums involved in this way means that only the approval of the state budget committee, which Milbradt will likely win over, will be needed. But what this move will do to Milbradt's political fate remains unclear.

Not everyone is convinced that the guarantee will be sufficient. If SachsenLB suffers even more losses, LBBW will be required to bail out the bank for up to €6 billion. After that, the remaining state-owned banks and DekaBank would be required to step in. The relevant parties are negotiating the distribution of the burden at a closed-door meeting in Berlin on Wednesday.

One thing is clear: Many state-owned banks are not even in a position to help in a bailout. Most of them have also been involved in high-risk deals with US mortgage-backed securities. In fact, the state-owned banks have committed significantly larger shares of their assets to these investments than the private banks.

To satisfy that need, WestLB employed competent investment bankers in London and New York who were extremely expensive but ultimately had little to do. After the first disaster in this business, which led to losses of more than €3 billion four years ago, the bank's supervisory board vetoed many international deals. 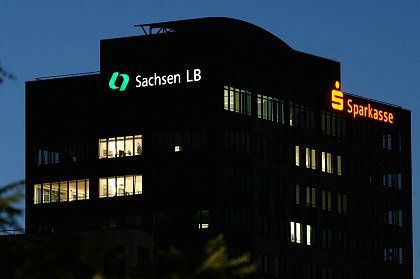 The banking crisis may ultimately hit Germany harder than expected.

In the domestic market, the savings banks were quick to curtail WestLB's activities. Whenever lucrative deals were in the offing, the banks, identifiable by the red "S" on their logos in cities like Cologne and Düsseldorf, insisted on handling them themselves. WestLB's owners, the savings banks, instructed it to deal only with small or mid-sized commercial borrowers with at least half a billion euros in sales. The business coming from this group of customers was insufficient to produce reasonable profits. Other state-owned banks have similar problems with the savings banks, which play a significant role in the German financial services industry.

The upshot is that the entire state-owned banking sector in its current form is outdated. In addition to being inflexible and inefficient, the institutions lack a convincing business model.

They have also fallen on hard times. For several years now, they have expended much of their energy on fending off private investors, despite the fact that these investors are urgently needed. This is time-consuming and expensive.

These activities were so costly that they weakened the publicly-owned banking sector overall. They also caught the attention of politicians. According to officials at his ministry, Minister of Finance Peer Steinbrück became contemplative when faced with the question of whether it was absolutely necessary to preserve the three-column model of private, public and cooperative banks.

The reason for Steinbrück's gradual change of heart was the behavior of the private banks during the bailout campaign for Deutsche Industriebank (IKB), which, like SachsenLB, was facing the brink of bankruptcy as a result of its dealings in the US mortgage market. The private banks responded far more quickly and reliably than their public competitors.

Governors Rüttgers and Koch also know that the future of the state-owned banks depends on private investors being allowed to invest in them, at least as minority shareholders. The bank that will result from the merger between WestLB and Helaba could set an example in this regard.

The two politicians agreed that the new bank will also throw its hat into the ring to acquire IKB, which would create a mid-sized bank with offices throughout Germany. This, in turn, would provide the bank with a feasible business model. When it comes to raising the funds needed to acquire IKB, financial investors will be welcome. The private customer business would become a second segment of the new organization's business. Helaba, which also includes Frankfurter Sparkasse, which it acquired in a bailout purchase, is already active in this business.

The savings banks have barred WestLB from merging with Düsseldorfer Sparkasse until now. But this could soon change, now that the savings banks -- hoping to improve WestLB's rating and its profitability -- have indicated a willingness to abandon their opposition to the merger, which would create an entity that would be known as Metropolbank.

Rüttgers also made it clear that if his compromise proposal is not accepted, he would sell the state's share of WestLB. The savings & loan bank would then have the first right of refusal. But because of the purchase of Berliner Landesbank and other local problems, the savings banks currently lack the additional billions such expenditures would necessitate.

Günther Merl, the CEO of Helaba, was taken aback when he learned of the two governors' plans last Wednesday. But his disgruntlement and the displeasure of other savings & loan bankers quickly subsided. The powerful savings & loan association DSGV had understood the signals correctly. Rüttgers had categorically ruled out a merger between WestLB and LBBW. The compromise at least offered the face-saving option of preventing Rüttgers from selling the state's share of the bank to private investors.

Whether the merger will in fact materialize remains unclear. Rüttgers wants the merger and is willing to make the necessary personnel changes to make it happen. Insiders in Düsseldorf assume that Alexander Stuhlmann, the hapless interim CEO, will not be serving out his full contract, which ends in March 2008.

Bernd Fahrholz is seen as his potential replacement in January or February. Fahrholz, a former chairman of Dresdner Bank, is considered a close associate of Koch. For this reason, Rüttgers is unlikely to encounter much resistance in Hesse.

At the remaining state-owned banks, vanity continues to trump reason. The Bavarians, for example, under former Governor Edmund Stoiber, were open to overtures from WestLB. But the Düsseldorf-based bank's takeover bid, which it had intended as a rebuff to the advances of Stuttgart-based LBBW, fizzled. A few weeks later, Siegfried Naser, the president of the Bavarian Savings & Loan Bank, tried to revive the so-called southern rail by proposing a merger of BayernLB and LBBW. This plan also failed.

But if the planned merger of WestLB and Helaba brings momentum to the banking industry, a fear of being left out in the cold could take hold in Munich, where the Bavarians also have their problems. The credit crisis has also caused enormous difficulties in Munich.

Three shaky funds with a volume of about €16 billion must be taken into account. Accountants anticipate a loss in payments nearing €100 million as a result of the bad mortgages in the US. Revaluation reserves will have to be added to these losses, because the prices for the complex credit products have collapsed. According to internal estimates, the total bad debt could run upwards of €800 million.