Investors have every reason to hate the US dollar. The rising deficit. The deteriorating economy. The plunging stock and bond markets. But rather than getting hammered by the financial crisis, the greenback is soaring. Since July the dollar is up 19 percent against the euro and 24 percent against the British pound. 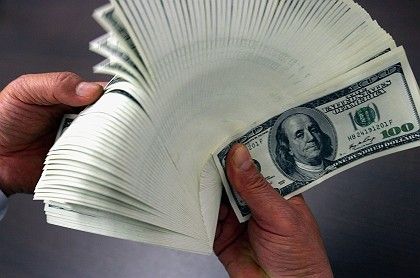 As the financial crisis has intensified, worried investors have fled to the dollar.

Whether it's a boon or a burden depends on perspective. US companies with huge exports aren't thrilled, since a strong dollar hurts sales. On Nov. 24 Campbell Soup, which derives up to 30 percent of its revenues from outside the US, said currency exchange rates would cut earnings growth by five percentage points this fiscal year. Meanwhile, US consumers traveling to Paris will find their cash buys more than before.

What's behind the dollar's surprising strength? First, there's the fear factor. During tough economic times, investors often flee foreign currencies and other risky assets for safe havens like the U.S. dollar. The demand drives up the price relative to other currencies. In four of the past five recessions since the 1970s, the greenback finished the downturn higher than where it started.

The euro, the pound, and emerging-market currencies may also have been inflated after a six-year runup. A basket of foreign currencies, including the Brazilian real and the Chinese yuan, rose 25 percent between 2002 and mid-2008 vs. the dollar. The euro jumped 45 percent. But earlier this year some investors started betting the bubbles would burst, driving down the price of the currencies and conversely benefiting the dollar. "Since March, we were aggressively short the euro," says Colin Hart, director of currencies at Baring Asset Management.

US-based hedge funds and mutual funds that own international stocks have played a part as well. Both groups are getting hit with a wave of redemptions. Investors yanked $39 billion out of international stock funds run by US firms through the first nine months of the year, according to trade group Investment Company Institute. Without enough cash on hand to cover withdrawals, managers have had to dump foreign assets and buy US dollars to pay back investors. Those purchases boost the greenback.

The question now is whether the trend will continue. After its recent strong performance, the dollar is currently trading at about $1.28 to the euro, what some figure is a fair price based on the current buying power of consumers. "When the [market] stresses start to abate, people will be forced to think about whether they want to invest in the US," says Thomas Stolper, an economist at Goldman Sachs.

But if the global economy continues to sour, the dollar may rise even more. The credit storm is just beginning to hit emerging markets, many of which thrived on exports. With US consumption shrinking, the economic prospects of countries including India, Brazil, and Turkey look shaky. Such fears are hurting the local currencies. The once-strong Indian rupee has dropped 17 percent over the past two months.

The European currency markets may also feel the stress from a continued global slowdown. The euro zone lacks a strong central government that can adjust rapidly to crisis. For example, the European Central Bank has been criticized for not recognizing the severity of the crisis early enough: It raised interest rates in July before cutting them in October and November. Says Stephen Jen, an economist at Morgan Stanley: "The dollar's rise is genuine and more deserving than many skeptics have in mind."